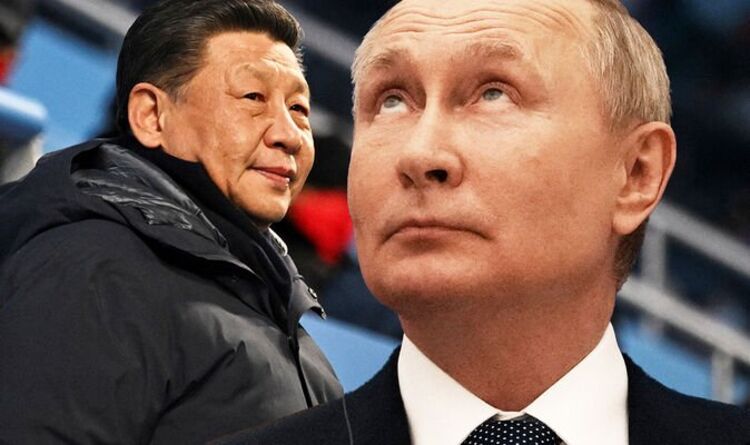 An invasion by Russia could result in ruptures with ally China. (Image: Getty Images)

It comes as intelligence sources from the US and Nato confirmed that Russia now has enough forces to mount a full invasion next week.

US officials have painted a stark picture of “an horrific, bloody campaign that begins with two days or aerial bombardment and electronic warfare, followed by an invasion, with the possible goal of regime change.”

Such an invasion by Russia could result in ruptures with ally China, plus see a hugely negative reaction among the Russian population.

According to the US sources, this could happen on Wednesday, though Nato sources say it is more likely to happen on Saturday.

However, it was not clear whether these assessments come from actual intelligence from Russia or simply analysis by the Pentagon.

An emergency Nato Council meeting on Friday showed that divisions within the alliance still exist, with both Germany and France questioning the veracity of intelligence evidence indicating imminent invasion.

They were joined by Ukrainian President Volodymyr Zelensky, who yesterday also demanded the US share intelligence which suggests Russia is planning to invade his country on Wednesday.

Further diplomatic meetings with Putin by German Chancellor Olaf Scholz are planned for tomorrow in the hope that a raft of planned sanctions may still deter him.

UK citizens were urged to leave the country on Friday, and the small cadre of 100 British troops who have been training Ukrainian forces have been pulled out this weekend.

Britain’s Ambassador to Ukraine, Melinda Simmonds, is remaining for now with just a handful of staff, who are in lockdown.

Nato secretary general Jens Stoltenberg said: ”The number of Russian troops is increasing, as is their readiness and capability to conduct military actions in a very short timeframe.

There is a real danger of invasion and we are preparing for many different scenarios.”

Those scenarios range from the annexation of Donbas, with the hope of creating a federal Ukrainian state capable of vetoing any hopes of the country joining Nato; creating a land bridge between Donbas and already-annexed Crimea; taking the city of Mariupul and the strategically important port of Odessa, to surrounding of Kyiv with troops in a bid to force regime change and, ultimately, complete military take-over.

However, Putin, who has always denied any intention to invade, does still hold another card: to simply recall his troops and watch divisions between Nato increase.

Should he choose an incursion, intelligence reports point to airstrikes, artillery and armor attacks followed by airborne assaults in the east, amphibious assaults in the city of Mariupul and Odessa as well as a smaller incursion through neighboring Belarus.

One of Putin’s desires is regime change, and military analysts say he is using lessons learned from the 2003 invasion of Iraq which toppled Saddam Hussein.

“There’s already a maritime blackout – one of the first indicators of invasion. This also means a no-fly zone which cuts Nato out of the northern Black Sea.

“They are already disseminating disinformation – like when we texted Iraqi generals – and they will demolish infrastructure.

“As in Iraq, the aerial campaign will mean Russia has control of aerial intelligence. Nato will no longer be able to use Rivet Joint aircraft to provide Istar intelligence and reconnaissance, leaving Ukraine blinded and no longer able to see 100km into Russian borders to see what units are being moved and when.

“Ukraine will be down to landlines – if they work.”

But there are differences, said Gen Sir Richard Barrons, who led UK Joint Force Command until 2016.

“Russia’s aerial bombardment will be more dominated by long-range precision missiles and rockets, and it is now capable of linking them to cyber attacks on critical infrastructure and military systems, such as command and control and air defence, radars and power grid<' he said.

Gen Barrons said it was more likely that Russia would focus on a smaller incursion.

“The aim of Iraq 2003 was to get rid of Saddam Hussein. But If Putin acts in the same way, he opens up a vast opportunity for the West to provoke regime change in Russia,’ he said.

“Even if he had sufficient forces to hold Ukraine, which is doubtful, there is no groundswell of support in Russia for this. This is a war with less than 0.1 percent of Russia’s population.

“Instead of fighting for territory, Ukraine’s large forces should aim to put as many young Russians in body bags as quickly as possible. The West will convey this to as many Russians as possible using social media with messages like: ‘If you haven’t heard from your son, he’s dead’.

“Couple this with economic isolation, angry oligarchs, a trashed currency, trade and income, and Putin’s regime may find it’s not as well insulated as he thinks.”

What is happening where you live? Find out by adding your postcode or visit InYourArea

A full invasion which risks rendering Ukraine a failed state would also not please Russia’s new strategic partner, China – for whom the country is an important plank to its BRI route to Europe.

“China doesn’t want Russia to invade Ukraine. The nexus of power in this partnership is at its greatest now, before the event,” said China expert and former UK diplomat Matthew Henderson.

“Once it happens, China would find itself enmeshed in unknown unknowns. Beijing likes stability and values ​​its relationship with Europe.

“I am sure that Xi and Putin will have discussed this and it’s worth remembering that Russia is very much the junior partner.”

Last night defense committee chair Tobias Ellwood MP warned: “This is our Cuban missile crisis moment”, adding that allowing Ukraine to fall would see a “new era of instability with a Russia and China axis developing” with the West “shrinking in size” and authoritarianism on the rise.

Gen Barrons added: “It may seem that we are now playing for our relationship with Russia.

“But much greater issues, including the rise of Asia, effects of population growth, climate change and dislocation of the digital age, mean we must stand up for our values ​​in a time when those things are no longer guaranteed as they once were.”

“For that reason, he said. Russia must face the same harsh sanctions even if Putin mounts a more limited incursion.

“Putin will hope for such an overwhelming sense of relief by the West that he faces little sanction. The west must not differentiate between a defeat in inches rather than miles.

“China is looking to see how far a country with 140 million people and a GDP the size of Spain’s can push around 500 million Europeans.

“What we are actually playing for now is the conversation we must face with China later about how the world works.”