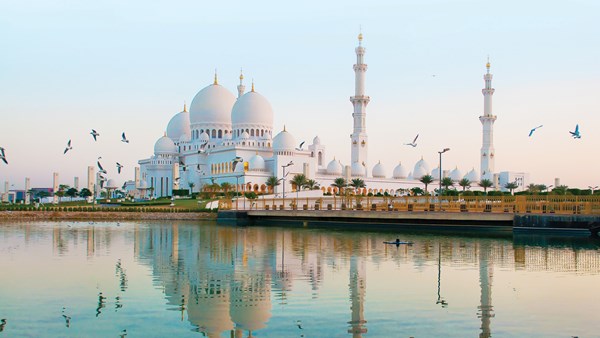 The Emirates Foundation for School Education has announced the start of activating its cooperation with the Sheikh Zayed Grand Mosque Center, organizing on-site and virtual tours, programs and activities for public school students of all academic levels throughout the school year. Tours include three significant sites, adding to the Sheikh Zayed Grand Mosque in Abu Dhabi, the Sheikh Zayed Mosque in the Emirate of Fujairah, and the Founder Zayed Memorial in Abu Dhabi.
By organizing these cultural tours, the Emirates Foundation aims to build the capacity of students and introduce them to the most important cultural, tourist and national monuments of the country, to strengthen the national identity and to identify the details contained in these monuments which express the values ​​and achievements of the founding father, the late Sheikh Zayed bin Sultan Al Nahyan, “God bless you. “His richness” and his wise approach, which is always a source of inspiration for all, as well as access to the most striking characteristics and details of Islamic architecture. These visits also help to equip students with the knowledge and skills necessary for self-study through research and exploration. The Foundation has called on all government school authorities to pre-register so they can coordinate the workshops. And visits to the three attractions.
The cultural tours organized by the Sheikh Zayed Grand Mosque Center are a unique enriching and interactive experience, making it one of the most important cultural activities at the center, which are very popular among visitors, and are very popular with of all age groups in the United Arab Emirates.
The duration of the tour is approximately 45 minutes, in either Arabic or English, and is presented by a number of cultural tour specialists affiliated with the Centre, who take visitors on a tour of the corridors and halls of the mosque, during which they listen to an explanation on the aesthetics of the mosque and the characteristics of Islamic architecture.
Upon arrival in the main prayer hall, students will be able to identify the largest Persian rug in the world recorded by the Guinness Book of World Records in 2007. It is handmade in the Islamic style and was made by 1,200 of the most qualified. carpet artisans in the world.

The work in its manufacture took two years, 8 months for the design and 12 months for the weaving, and the rest of the period during which the pieces were moved and woven in the mosque until they came together in one mat. The carpet area is 5,400 square meters and it weighs about 35 tons.
From a distance, students will see the four minarets of the Sheikh Zayed Grand Mosque, each of which is approximately 107 meters high and exhibits many features of mosque architecture from various Islamic eras. Students will tighten the bright white that covers the mosque building. The late Sheikh Zayed bin Sultan Al Nahyan, may God rest his soul, loved the color white, which symbolizes guidance, purity and serenity.
In the construction of the mosque, “Sivic” white marble, imported from Macedonia, was used due to its pure whiteness. The total area of ​​marble covering beacons, domes and exterior walls of the mosque was over 164,000 square meters. meters.
The Sheikh Zayed Grand Mosque is characterized by its exquisite Islamic architecture and pure white color, as white marble covers all its facades and columns, which are decorated with Quranic verses, flowers and handcrafted Islamic decorations. Natural materials have been used in the construction of the mosque. , including marble, wood, mother of pearl, in addition to colors, etc. Lots of high quality materials from different parts of the world.
In the construction of this architectural building, various natural materials were used, such as: marble, semi-precious stones, crystal and gold, which stand out for their durability and aesthetic touches to the architectural design.
The architectural design of the mosque included many different artistic styles, materials and techniques, inspired by several different styles, expressing the aesthetics of Islamic architecture at different times and combining Moroccan, Mughal, Mamluk, Ottoman and other designs, and its architecture influences unite in a melting pot of homogeneous symmetry.

The second largest mosque in the country
As for the Sheikh Zayed Mosque in Fujairah, it is the second largest mosque in the country after the Sheikh Zayed Grand Mosque in Abu Dhabi. The mosque is a distinguished and unique Islamic and cultural center, and a cultural and architectural landmark that sets the emirate of Fujairah apart. It is linked to the name of the late Sheikh Zayed bin Sultan Al Nahyan, may God rest his soul, and is reflected through it is the message of the United Arab Emirates, stemming from the culture of tolerance, coexistence and Peace.
The architecture of the Sheikh Zayed Mosque in Fujairah imitates the traditional methods of Ottoman architecture. The mosque occupies a large area of ​​land in the heart of the city. The total area of ​​the mosque is 38,580 square meters and can accommodate 28 000 people. faithful, including 2,500 in the area reserved for women.

Zayed’s Monument
Regarding the Founder’s Monument, which was created to celebrate the love of the late Sheikh Zayed bin Sultan Al Nahyan, may God rest his soul, for nature, and his commitment to preserving the local environment, it includes many trees, seedlings and plants that belong to the environment of the Emirates and the Arabian Peninsula. In the “Heritage Botanical Garden”, students will have the opportunity to learn about the plants that have been used by people over the centuries for their medicinal properties and medicinal and medicinal importance.
While the “Rawdah”, which surrounds the work “Al Thuraya”, includes Ghaf and Sidr trees, which provide an atmosphere of comfort and tranquility that invites contemplation under its lush shade.
And near the “Rawdah” there is a contemporary design of the aflaj irrigation systems which were used by the people of the Arabian Peninsula in agriculture, and which were later developed by Sheikh Zayed bin Sultan Al Nahyan, that his soul rests in peace.
The walkway rises above the open garden, giving visitors stunning views of the artwork and the landmark-rich Abu Dhabi city skyline. It also includes the words of fire, Almighty God, Sheikh Zayed, full of wisdom that inspires Emirati generations, and forms a compass that guides them to pursue the path of development and progress.