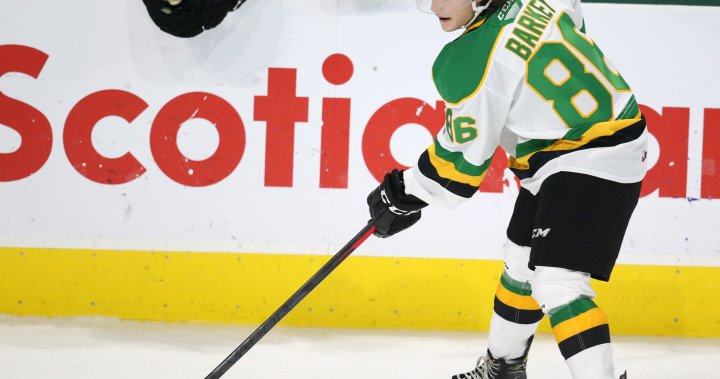 The Windsor Spitfires scored power play goals 45 seconds apart in the second period clearing the way to a 5-2 victory over the London Knights on Saturday night at the WFCU Center in Windsor, Ont.

With the Knights ahead 2-1 on a pair of goals by Liam Gilmartin, first Wyatt Johnston and then Matt Maggio found the back of the net to turn the one-goal London lead into a one-goal Spitfires lead.

Windsor held on from there.

Johnston ended the game with two goals and an assist for the Spitfires. That gave the Dallas Stars prospect a team-leading 76 points.

London conceded the first goal of the game for the second straight night. Michael Renwick of Windsor took a pass off a face-off in the Knights’ end and zipped the puck in front — intended for a hard-charging Louka Henault steaming in from the blue line. The puck hit a Knights defender and deflected past Brett Brochu before it could get to Henault. The Spitfires led 1-0.

Liam Gilmartin tied the game for London with just under five minutes remaining in the first period. Ethan MacKinnon took a wrist shot from the left point that Spitfires goalie Xavier Medina stopped. Gilmartin was right there to force the rebound across the goal line for his seventh goal of the season.

Gilmartin got his eighth goal unassisted, 3:39 into the second period, as the San Jose Sharks draft pick muscled the puck out of a scrum on the right side of the Windsor zone, got to the slot and beat Medina on the stick side. That made it 2-1 for the Knights.

That lead lasted just over four minutes until Henault swept a pass across the ice on a Spitfires man advantage. Wyatt Johnston blasted it in. London used a coach’s challenge to check for a potential offside but the review kept the call on the ice and the game was tied 2-2.

Matt Maggio converted a feed in front, 45 seconds after that for the eventual game winner and Windsor took a 3-2 lead into the third period.

Another lengthy review highlighted the final period as a penalty that was originally called as a minor for interference on Bryce Montgomery was changed to a major penalty. It had London fending off the Spitfires on the man advantage for a full five minutes.

The Knights killed the penalty goal could not find the tying goal. With under four minutes remaining Daniel D’Amico ripped a shot from the slot high into the Knight net to give the Spitfires a two-goal lead. Johnston finished the scoring with an empty-netter.

London ended up splitting four straight games on the road. They now sit five points back of Flint for first place in the Western Conference with five games in hand.

The Knights continue to lead the season series with the Spitfires 4-2 with two games still to be played.

Canada at the Beijing Olympics: What to watch Saturday night, Sunday morning

Former Knights captain JJ Piccinich made the jump across the pond from the ECHL to the EIHL and it’s a jump that has vaulted him to stardom in the United Kingdom.

Piccinich leads the UK’s Elite Ice Hockey League in scoring as a member of the Belfast Giants. The Paramus, NJ, native has 20 goals and 45 points in 32 games. Belfast currently sits in third place in the overall EIHL standings just three points back of the Sheffield Steelers.

Piccinich spent 2015-17 in London and helped the Knights to a Memorial Cup championship in 2016.

London Knights: Back in time — May 13

Cajan has been right on

A night after making 44 saves against the Knights in a 6-4 win, Kitchener Rangers goalie Pavel Cajan went 24 better in a 68-save effort in Owen Sound that helped the Rangers win 4-3 in overtime on Saturday. The native of Czechia stopped 24 pucks in the first period, 25 more in the second period, 15 in the third and made the only save he needed to in overtime before Joseph Serpa slapped home the game winning goal.

Picking favorites in the Ontario Hockey League in 2021-22 was a lot like picking out the fastest goldfish in the tank at the pet store. After being away for an entire season it was easy to make arguments for a number of teams to have success. Even then, the Flint Firebirds weren’t getting many mentions.

They changed their head coach and their general manager coming into the season and they began the season in a “win some, lose some” pattern. Flint stayed middle-of-the-pack in the standings but they have vaulted into first place in the Western Conference with an 11-3-1 run dating back to December 12.

After four consecutive games on the road, London returns to Budweiser Gardens on February 16 to face the Guelph Storm.

Guelph has had the upper hand in the season series against the Knights winning five of six games so far but the Storm have had their struggles in January and February. After opening 2022 with a victory, Guelph has just three wins in their past 12 games.

They are coming off a 7-3 victory on the road in Saginaw, Mich., on February 12.

The Knights and Storm split a home-and-home series on January 22 and 23 with each club winning away from home.