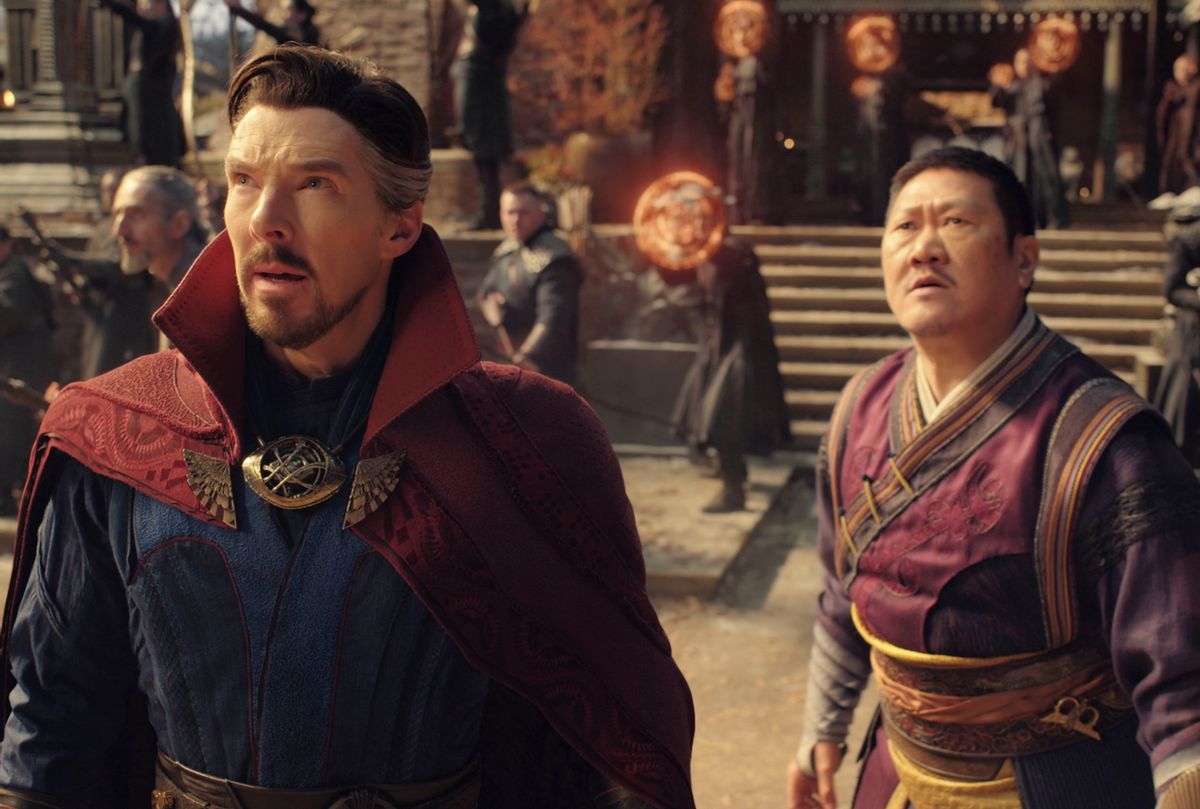 It happened about a week ago, maybe two, while walking past a cinema. Lined up among the tiles of the upcoming attractions was the scarlet, shaded poster for “Doctor Strange in the Multiverse of Madness.” But it wasn’t until I noticed how fast the May 6 release date was approaching that my complete lack of urgency to viewing it hit me in the chest – not with the force of a sonic boom, but rather with the weightless bounce of a wandering dust bunny.

“Is it weird that I have trouble caring?” I asked my husband, the man who had a huge Stephen Strange poster covering his bedroom wall when we were in college. If there was ever a guy who was ready for this flavor of Marvel Cinematic Universe action, it was him. Instead, he responded with a shrug and an “Eh!” before continuing to stroll.

“Is it weird that I have trouble caring?”

Love shivers with time. This is as true of a long-running film franchise’s relationship with its fans as it is of the bond between people, although with movies it’s less of an exchange than a one-way effort, the burden on studios to keep audience loyalty alive. My husband and I share a lifelong affection for comic books. We’ve also gone through so many hours of subpar TV episodes and movies that we’re much slower to jump on them now than we ever were.

Judging by the record pre-sale numbers for ‘Doctor Strange,’ the MCU isn’t in danger of being dropped. Benedict Cumberbatch’s return as a headliner is expected to bring in $160-180 million this weekend in North America alone, with global returns expected to push that salary higher.

But box office reports don’t tell us all about our deepest feelings for a franchise that’s increasingly associated with terms like “sprawl” and “bloat.” Although my feelings are lukewarm, I’m still going to see it this weekend with friends. . . mainly to spend time with these wonderful people.

Remember that at the start of 2021, Disney + offered us “WandaVision” and that was good.

The Marvel Universe’s continued dominance in theaters and streaming is a reminder that we still haven’t reached peak superhero saturation. But a brand’s popularity doesn’t drop overnight. This happens bit by bit, individual by individual, until enough of us awaken to the realization that the diversions we once anticipated with childish buzzing glee are slightly modified versions of the same increasingly mediocre product.

Paul Bettany and Ashley Olsen in “WandaVision” (Marvel Studios/Disney+)It tends to happen when a studio overestimates our thirst for something and goes for quantity over caliber, a danger zone that Marvel and Disney+ might be about to push us into. Remember that at the start of 2021, Disney + offered us “WandaVision” and that was good. But between almost forgetting what it was like to be excited about “Doctor Strange” and walking to the end of “Moon Knight,” my appetite for those capes and costumes waned.

Surely it has nothing to do with Marvel’s ramping up content production. To the right?

Since Iron Man was released in 2008, there have only been two years without a Marvel release: 2009 and 2020. At least two Marvel movies have been released every year since 2013; in 2017, the exit rate increased to three, which we could still manage.

Then the pandemic and Disney+ came into play, and suddenly our mental palaces were inundated.

I’d probably be absolutely in love with ‘Doctor Strange’ if Disney hadn’t diluted my passion for all things Marvel by eliminating ‘Black Widow’, ‘Shang-Chi and the Legend of the Ten Rings’, ‘Eternals’, ‘WandaVision “, “The Falcon and the Winter Soldier”, “Loki”, “What if…?” and “Hawkeye” the same year.

Of this onslaught, only four titles are unquestionably worth the time and attention. Two of them – “WandaVision” and “Loki” – have direct ties to “Doctor Strange”, as well as “Spider-Man: No Way Home” (Sony’s Columbia Pictures technically owns the rights to all related properties to the Spider-Man movie.)

While not the worst of the MCU series, “Moon Knight” represents a steep drop in originality from previous Disney+ releases.

The action in “WandaVision” is central to the version of Wanda Maximoff (Elizabeth Olsen) we meet in the new “Doctor Strange,” which was written by “Loki” editor Michael Waldron. But only “Spider-Man” is close to this new version. . . and my experience with “Moon Knight”, unfortunately, is fresher, given the recent airing of the season finale. 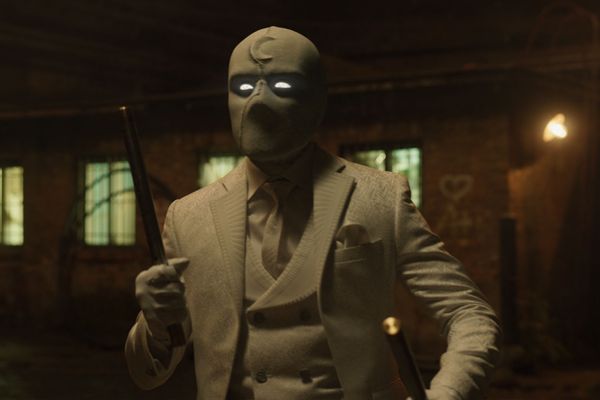 Oscar Isaac as Mr. Knight in “Moon Knight” (Photo courtesy of Marvel Studios/Disney+)While not the worst of the MCU series, “Moon Knight” represents a steep drop in originality from previous Disney+ releases. Granted, a lot of people loved it for what I suspect is the same reason most Marvel titles secure their fandom, which is to feature a much-loved name. This time it was Oscar Isaac’s turn, and good for him. At the rate Marvel is mining its library of IP, it’s a safe bet that every half-talented actor will have a chance to jump on its multiverse.

The same goes for administrators; the chance to see Sam Raimi realize the Marvel Multiverse is another reason to see “Doctor Strange,” someone reminded me. In turn, I reminded that person that I was also excited to watch Chloe Zhao’s version on “Eternals,” which turned out to be an unnecessarily long and deflating track to announce Harry Styles’ impending entry. in this overloaded super-person safari.

As for Isaac, he’s as alluring of a presence in “Moon Knight” as he is in any project he takes on, and plays his dual role as Marc Spector and Steven Grant, two sides of the dissociative disorder to the fullest. identity of the character. . Isaac’s distinctive rendition of each man is both sensitive and sensational. And his co-star May Calamawy matches his energy when playing against him as Layla, Marc’s wife. 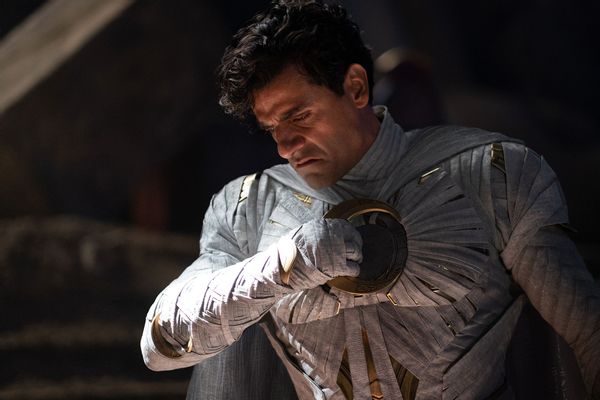 Oscar Isaac in “Moon Knight” (Disney+/Marvel Studios)But even the actors who bring stunning energy to what they’re given can’t get out of the quicksand of storytelling, and pretty much anything that should propel the plot does instead. (Ethan Hawke plays the adversary in this story. There: I mentioned him.)

Its climax in utterly ordinary CGI battle and resolution heightens the feeling of washing, rinsing, and repeating the MCU structure. I would never suggest that a superhero story give up all punch-and-boom entirely; it’s a big part of the appeal of the genre. But more than a year has passed since “WandaVision” aired its last episode, and while repeat viewing may remind me why I was once enthused about this world – or worlds, should I say – it can have the opposite effect.

Right now, I could very well be alone in this case, but history and memory suggest otherwise. Remember when we all agreed to take a break from “Star Trek”? How about the moment “Star Wars” fans shouted “Enough!” in unison? (My cold turkey moment came after watching the space hippos frolic in the fields of Naboo in “Attack of the Clones”. . . I mean, frankly.) Those days are also long gone; between Paramount+ and the Lucasfilm Channel on Disney+, we’re inundated with more “Star Trek” and “Star Wars” titles than ever.

But wait, there’s more – soon expansions to JRR Tolkien’s Middle-earth Chronicles and “The House of the Dragon,” one of many planned prequels to “Game of Thrones.”

At a time when fandom has more commercial value than originality, Disney, Marvel and the others are simply supplying a market they see responding to an overabundance of fantasy by opening their mouths wider and bracing for impact. . And we will continue to adhere to it as long as theaters maintain their post-pandemic novelty.

Spectacle is the central currency of films like “Doctor Strange”, ensuring that even people like me who have lost a bit of fun in this craft will at least remember how much better all that magic is when presented on a canvas several times our size. I’m sure I’ll have a great time with “Doctor Strange in the Multiverse of Madness,” if only to enjoy the company. As to whether this or any future Marvel TV and movie titles will qualify as unforgettable, I have my doubts.

“Doctor Strange in the Multiverse of Madness” is currently playing in theaters.