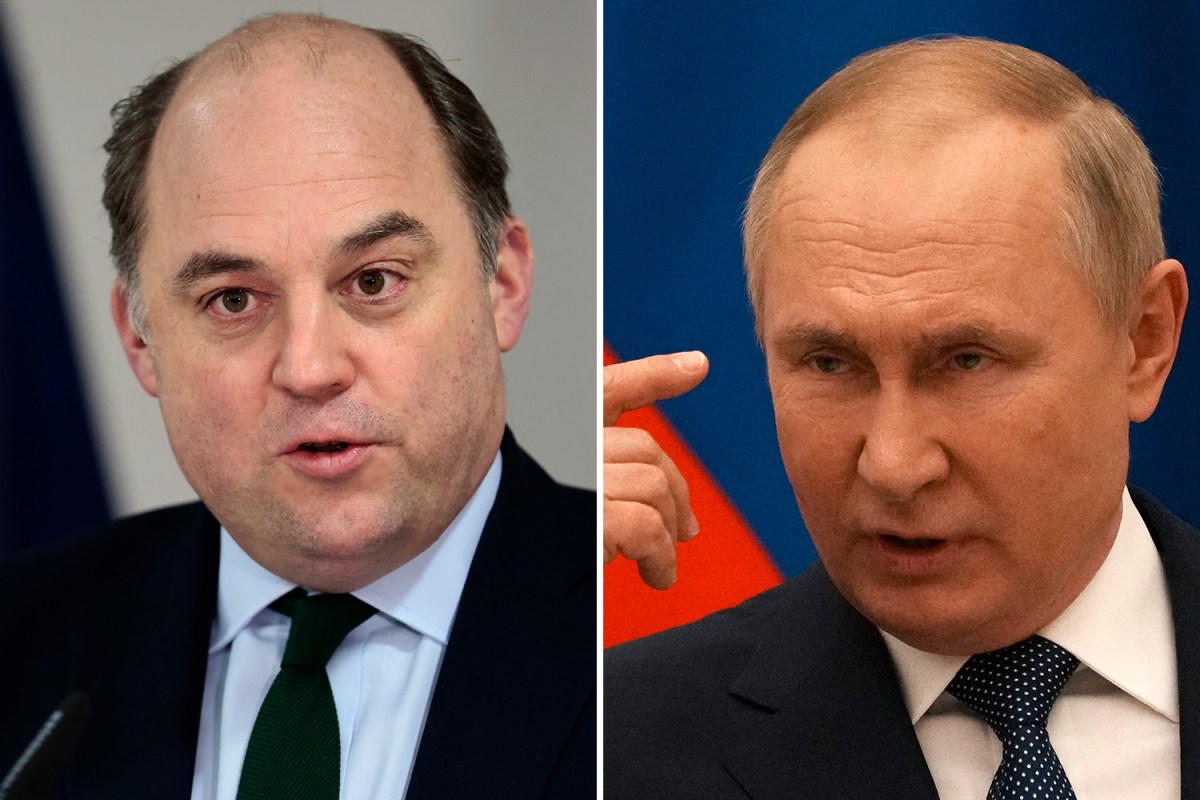 THE West’s handling of Vladimir Putin risks repeating mistakes made in dealing with Hitler before WW2, the defense secretary has warned.

Ben Wallace said there was a whiff of Munich in the air” – referring to the infamous agreement in which the UK and France allowed the Nazi leader to grab territory in return for a promise of peace.

His chilling warning comes as the world braces for Russia to invade Ukraine within days.

He said the 130,000 Russian troops massed on the border could “launch an offensive any time”, despite continuing diplomatic efforts.

And Wallace even hinted the West could replicate a historical mistake reminiscent of the miscalculation which ultimately led to WW2.

He said: “It may be that he [Putin] just switches off his tanks and we all go home, but there is a whiff of Munich in the air from some in the West.”

Speaking to The Sunday Times, the defense secretary described Russia’s continuously growing military stronghold on the border as “worrying”.

Now his candid comments have raised concerns the Kremlin will invade Ukraine regardless of diplomatic talks and threats of sanctions.

It seems the determined efforts of international leaders may have simply been a “straw man”, according to Wallace, if Putin does strike.

Wallace drew direct comparisons to the Munich agreement, which allowed the German annexation of the Sudetenland in 1938, but failed to prevent WW2.

However, talks between international officials and the Kremlin have continued, with Biden promising he was prepared to engage in diplomacy while being “equally prepared for other scenarios”.

It comes as Russia moved a fleet of attack helicopters to the border in one of the most ominous invasion signs yet seen.

Clips of the choppers taking part in excercises appeared eerily similar to those of aircraft at the same site in 2014 when Moscow intervened in the Donbas and annexed Crimea.

Global diplomats have warned their natives to leave Kiev due to the looming threat.

It may be that he [Putin] just switches off his tanks and we all go home, but there is a whiff of Munich in the air from some in the West.

Armed Forces minister James Heappey has warned Brit nationals the RAF would not carry out evacuations if war broke out.

It comes amid reports US intelligence suggests the invasion could happen as soon as Wednesday.

Wallace warned the potential for “millions of displaced people – refugees – pouring from one European country to another” is a real possibility.

Poland is among the countries preparing for an influx of Ukrainians fleeing the conflict if Russia makes a move.

Now the world watches on with bated breath as the Kremlin said it would pause to review US and Nato responses after crunch talks with Joe Biden on Saturday.

Northern Ireland Secretary Brandon Lewis told of his desire for a “diplomatic outcome” to the continuing tensions.

He told Sky News: “We have to be realistic with Russia having 100,000 troops on the border, an imminent incursion by Russia is entirely possible.

“It may well be that Putin is testing the boundaries where he can go. The UK has been leading the way of that alliance together to tell Russia this is not something we will tolerate.”

But Russia has begun pulling its diplomats out of Ukraine’s capital Kiev in the clearest sign yet that an invasion was on the way — as US spies claimed to have unearthed Putin’s battle plan.

It is said to involve pounding Kiev, a city of 2.9million people, from the air while ground troops surge across the border, risking massive civilian casualties.

Air, rail and road transport is likely to be targeted nationwide, the US believes, along with the power grid to black-out the country.

Huge columns of vehicles and men were seen in Valuyki, western Russia, heading south towards the Ukraine border ten miles away.

Russia moved an “atomic cannon” that can fire nuclear shells to Veselaya Lopan in Belgorod, also ten miles from the border.

More than 30 tactical exercises involving the Russian Navy’s Caspian flotilla, backed by helicopters and troops, will ramp up tension near Ukraine’s southern border from today.

The exercises will be held alongside threatening maneuvers in the Black and Azov Seas.

Six Russian landing ships, which can carry 2,000 troops and 40 tanks, are also within striking distance of Ukraine’s southern coast.