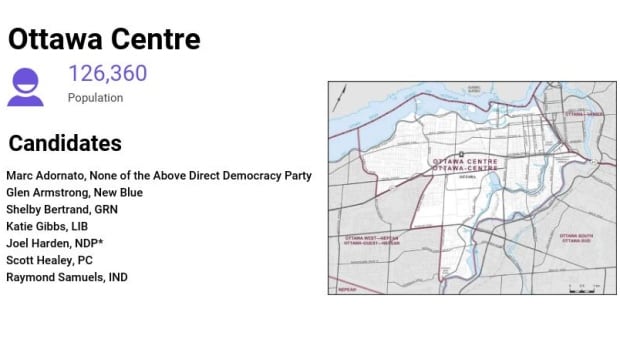 Ottawa Center featured a tight eight-candidate race in 2018, with the NDP winning more than 46% of the vote to win.

Next come the Liberals with nearly 33% of the vote, followed by the Progressive Conservative candidate who obtained just over 16%.

The Green Party candidate managed to get around 3.5%.

The NDP incumbent is running again in a seven-man race, but that could change before the May 12 entry deadline.

Marc Adornato, none of the above Direct Democracy Party

The candidate for the None of the Above Direct Democracy party is an artist based in Ottawa.

His work is part of the collections of the City of Ottawa and the Diefenbunker Museum, as well as several private collections around the world.

The Green Party candidate is a former public servant who worked with residential school survivors.

She is currently pursuing a Masters in Philosophy at the University of Ottawa.

The Liberal candidate grew up in Vancouver, Calgary and Halifax as a child before moving to Ottawa in 2006 for graduate school, where she realized her passion for politics.

She and her husband live downtown with their two children.

The NDP candidate was elected in 2018 for the first time as a provincial deputy.

The PC candidate has served 40 years in the Canadian Armed Forces, including a posting in Afghanistan.

He is director of the Friends of the Canadian War Museum and president of HMCS Bytown.