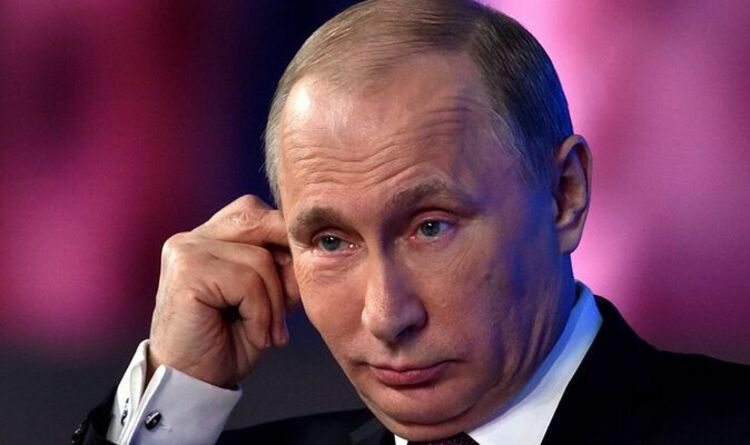 Mikheil Saakashvili served two consecutive terms as President of Georgia from 2004 until 2013. He is also well versed in Ukrainian politics, having been the Governor of Ukraine’s Odessa Oblast from 2015 until 2016. The Georgian opposition leader has extensive experience of negotiating with Vladimir Putin and has felt the wrath of Moscow on numerous occasions.

In 2008, Russian forces invaded his country in response to his decision to send the Georgian army into the rebellion province of South Ossetia.

The conflict lasted five days and ended with Russian forces coming within striking distance of Tbilisi, the Georgian capital.

Mr Saakashvili told Express.co.uk: “Putin is a street bully now out of his mind.”

He added that he had warned Washington that the Russian tyrant was willing to use nuclear arms.

The former President said: “Already in 2006 I warned Americans that he threatened me and my country with tactical nuclear missiles.

“My American friend thought I was exaggerating.”

The Russian President threatened the West with “consequences greater than any you have faced in history” if they became involved in the Ukraine conflict.

Many analysts took this as a direct threat to use nuclear weapons against NATO and its allies.

Those fears were stoked when Mr Putin ordered his Defense Minister and Chief of the Military’s General Staff to put the nuclear deterrent forces on a “special regime of combat duty”.

Mr Saakashvili is confidant his Russian nemesis will not succeed in his Ukraine campaign and suggested he could become his “Slavic Afghanistan”.

He said: “He will not achieve his military goals.

“He will not succeed in Ukraine – it is his Slavic Afghanistan.”

Some people have argued that Ukraine has brought this war on itself by insisting it wanted to join NATO, against Russian wishes.

These commentators say that the country should have maintained its status as a neutral, much in the same way as Finland has done since the end of World War 2.

These arguments ignore the fact that Kremlin propaganda has for years cast doubt on Ukraine’s right to exist as an independent state, suggesting that even if Kyiv had pledged to remain neutral, the country would still have been vulnerable to Russian annexation.

Mr Saakashvili commented: “No matter what Ukraine would have done, Russians would attack.”

The 53-year-old returned to his home country at the beginning of October last year to try to boost opposition support ahead of municipal elections.

The opposition leader was promptly arrested and charged with abusing his power for his role in suppressing a 2007 protest.

He has branded the charges as “politically motivated” and went on a 50-day hunger strike to protest his treatment in jail.

Still in prison, Mr Saakashvili has started a new hunger strike, as he continues to protest his innocence.

He told Express.co.uk: “I had a hunger strike for 50 days, almost died because I was tortured and was subjected to inhuman and degrading treatment in parallel, and was left with heavy neurological condition and PTSD.

“Now I am on a new hunger strike.”

Mr Saakashvili believes that Mr Putin is behind his arrest and imprisonment.

He explained: “In 2015 when I became governor of Odessa region, Putin loudly protested against it.

“The Georgian government immediately started criminal cases against me.

“Amnesty International call it not only selective justice but clear use of political revenge.”