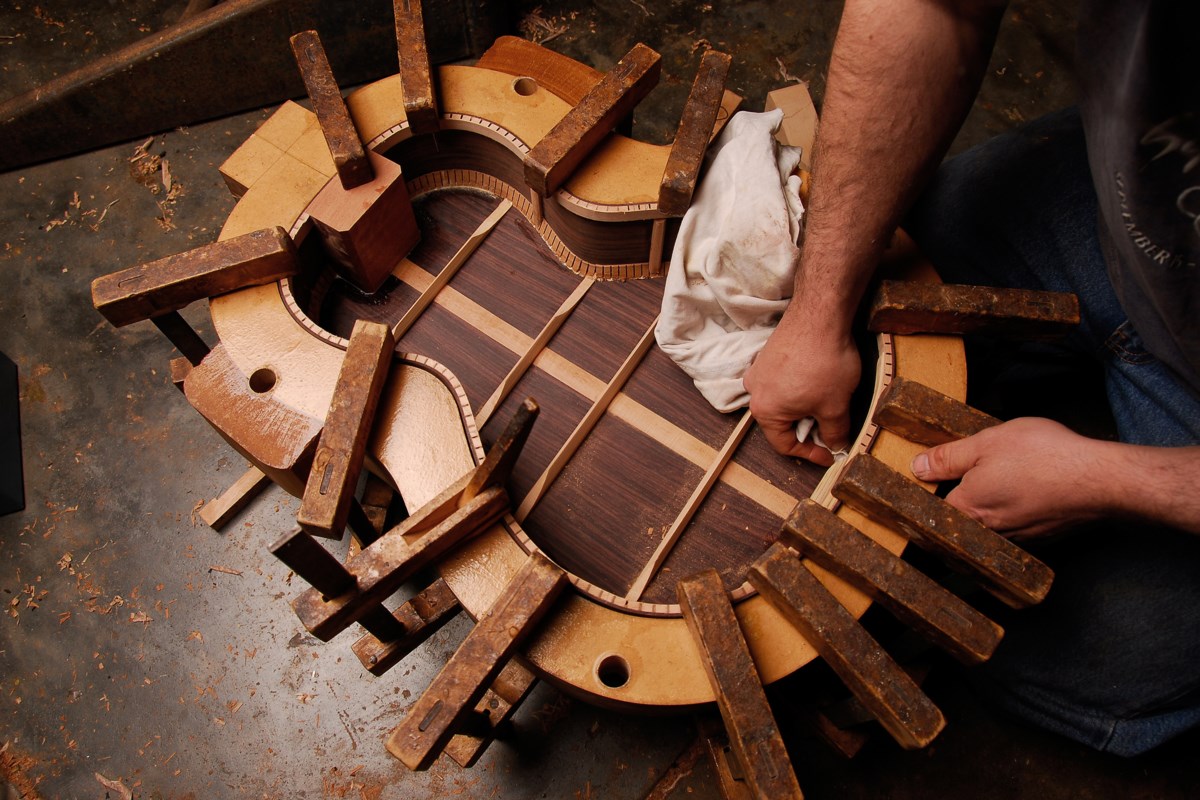 In 1982, Jean Larrivee Guitar Makers (which started in Toronto in 1967) moved from Victoria to Vancouver, making the city a hub of guitar manufacturing.

Although now based in California, many talented luthiers rose through the ranks at the Larrivee factory in Vancouver and set up on their own when the company relocated.

“They trained a lot of people who came through their workshop and after that a lot of those makers went off on their own and continued making guitars,” says local luthier Rye Bear of GR Bear Guitar Making. “There are actually quite a few guitar makers in Vancouver and there are also people who specialize in other aspects of the industry.”

Bear, who has spent most of his life in Australia, says that when he was looking for a place to establish his guitar business, Vancouver seemed like the perfect location because of connections to everything from world-class finishing to guitar parts. “I can also perfect my craft by learning from all the people here,” he adds. “In a place like Vancouver, because you have all these experts around you, it’s so great to tap into those resources.

Many smaller guitar makers work in tiny studios or in their garages and don’t have access to things like professional spray booths, which Bear says start at $15,000. So having someone like Rob Bustos of Vancouver Guitar Finishing to outsource this project is a real bonus and according to Bear, who says “his finish is the best in the world”.

Bear also shouts out Yusuke Kawakami, a third-generation Japanese luthier and owner of Japart, a Japanese guitar parts importer. “I worked alongside Yusuke to develop a set of custom tuners that were only available on my guitars, but they were made by one of the world’s finest tuner manufacturers, Gotoh in Japan, and therefore having the kind of specialty he provides, in this town you again have access to such an amazing resource,” Bear says.

He also points out that we have access to much of the instrument wood that is exported to mills around the world, such as Sitka spruce and western red cedar. “British Columbia is also probably the biggest exporter of maple for specifically electric guitars,” he adds.

Vancouver’s proximity to the United States also makes it an ideal location for guitar makers to locate for easy travel and a foothold in the US market.

The perfect storm of factors culminates in a community of luthiers and people in guitar-adjacent professions in one place. Here are six to discover:

Prestige Guitars in North Vancouver has been around for 16 years and has an award-winning collection of solid and semi-hollow body electric guitars, basses and hand-carved acoustics. Many of their guitars look as much like works of art as they do instruments and are used by professional musicians in bands such as Guns ‘n’ Roses, Slash and the Conspirators, Big Wreck, The Guess Who and Shinedown.

GR Bear manufactures classical concert and steel-string acoustic guitars using modern bracing techniques. Steel strings are available in an orchestral and Grand 00 pattern. Bear says he is also able to make small modifications or customizations to the guitar upon request.

Riversong built its reputation by developing a patented Neck-thru design that increases resonance by decreasing bulky bracing. They have a collection of acoustic electric guitars and ukuleles, but they also do custom builds. They also released an electric guitar model, the T2.

Nicole is one of the luthiers who made their debut in Larrivee. She has been in the guitar business since 1999 and studied with Geza Burghardt, another Larrivee alumnus, who has mentored many local luthiers and teaches guitar making on Granville Island. Nicole opened her own shop in 2003 and restores classical guitars and violins as well as making guitars by hand. She often speaks at the Vancouver Guitar Show.

Meredith Coloma is recognized as one of the youngest professional luthiers in the world and creates custom builds in her East Vancouver studio. Her business was taken over by Pacific Wood Lab and she offers lessons and sells guitars through them, although her Instagram is still active.

A former luthier in Hungary, Geza Burghardt is a legend among the local luthier community. In 1996, he opened his business in Granville Island specializing in guitars and other stringed instruments. He performs repairs and restorations for the Vancouver Symphony Orchestra as well as other orchestras in Canada and the United States and has mentored many luthiers in the city.