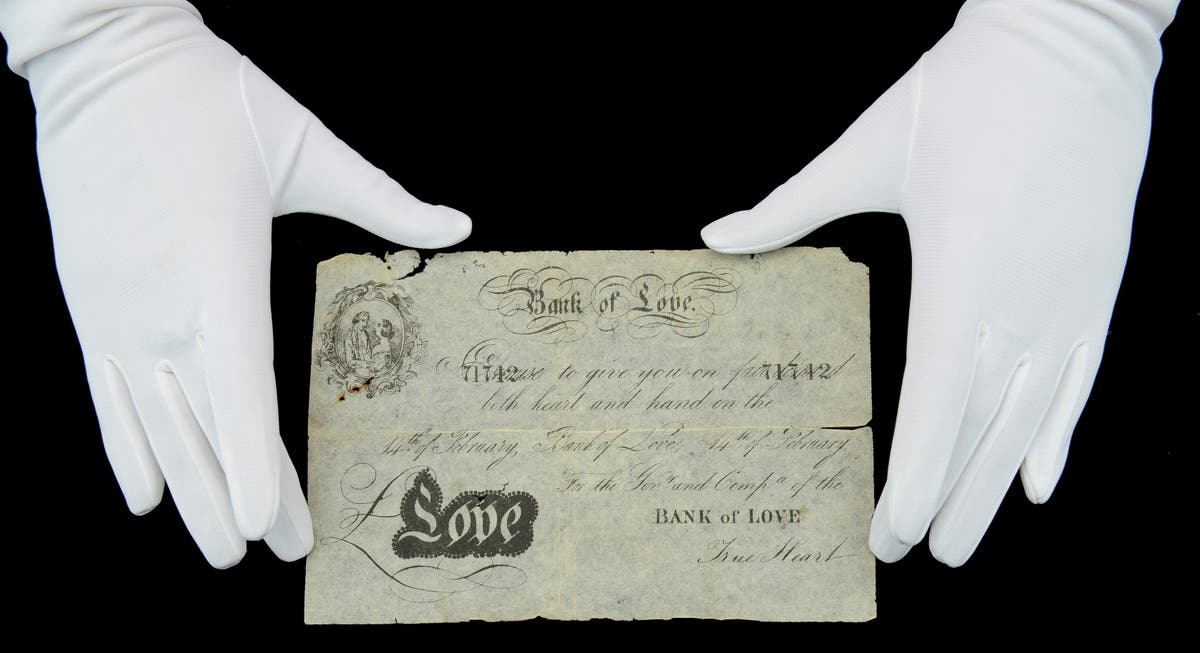 Nineteenth-century Valentine’s Day-themed imitation banknotes issued by the “Bank of Love” and “Lovers’ Banking Company” are to be sold at auction.

They are part of a collection of more than 30 skit notes due to go under the hammer at London-based auction house Dix Noonan Webb on February 24.

Skit notes are not real money, but generally mirror designs of real banknotes of the era.

They were often produced as amusing gifts for lovers or friends, while others carried prints of political satire.

The document from the Bank of Love, which is undated but is believed to be from 1840-50, promises to “give you on fair demand both heart and hand on the 14th February” and features a vignette showing a man and woman gazing adoringly at one another.

The one from the Lovers’ Banking Company, dated 14 February 1877 and signed “Cupid”, promises to “pay you on demand the entire love of the supplicant who sends this”.

They will be offered as part of Dix Noonan Webb’s auction of British Irish and World banknotes, which the company described as “remarkable pieces of social history”.

Andrew Pattison, head of Dix Noonan Webb’s banknote department, said: “They give us snapshots into the cares, fears, livelihoods, humor and pastimes of those who lived and worked in the British Isles for the last several hundred years.

“Some, by accident or design, sail very close to the wind, and 19th century court records are full of attempts made by unscrupulous or ignorant individuals to pass them as real money. Many of the punishments were severe, including flogging and transportation to the colonies.

“Some of these notes tie in with what we know about the grand story of kings and wars and politics – they warn of imminent French invasion or protest for better working and living conditions.

“Others are outwardly much more pedestrian, advertising the services of a small wine merchant, or a Christmas pantomime.

“Still others were never anything more than jokes or amusing gifts for friends or lovers, and are all the most charming for that.”