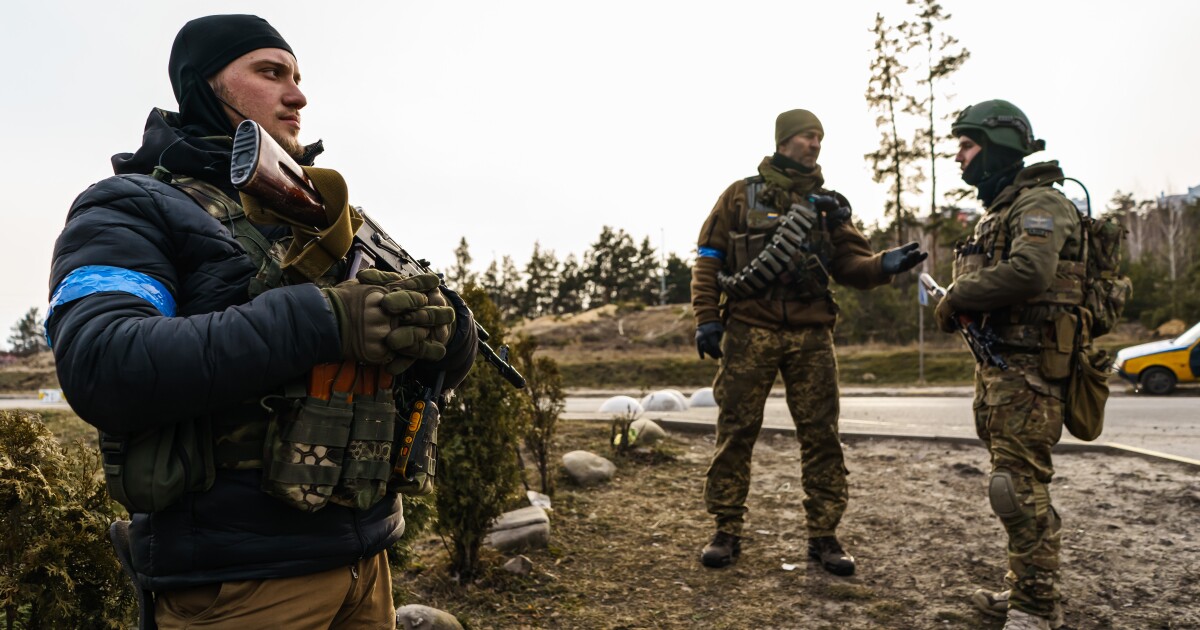 Russian fighter jets fired dozens of cruise missiles Sunday at a Ukrainian military training base near the border with Poland, killing at least 35 people. The deadly strike close to NATO territory came a day after Russia warned it would consider Western arms shipments to Ukraine a “legitimate target.”

The targeted facility, known as the International Peacekeeping and Security Center, was struck before 6 am, the mayor of the nearby city of Lviv, Andriy Sadovyi, wrote in a Facebook post. In addition to at least 35 people killed, scores were injured, the regional governor said.

Ukrainian air defenses downed most of the incoming missiles, but at least eight hit the base in the city of Yavoriv, ​​igniting fires that raged for hours and setting off an intense search-and-rescue effort, said Maksym Kozytskyi, head of the Lviv regional administration.

In the war’s 18th day, the strike on the base came against the backdrop of a devastating Russian assault on Ukrainian cities and towns, which has brought invading forces closer to the outskirts of the capital, Kyiv, and caused a dire humanitarian crisis in the besieged southern port of Mariupol. Authorities in Mariupol have been burying bodies in mass graves, and residents reported boiling water from puddles to drink.

In another southern city, Mykolaiv, nine civilians were killed in a Russian airstrike Sunday, the regional governor, Vitaliy Kim, said in a video address. The Black Sea port has been under attack as Russia aims to sixteen Ukraine’s seacoasts to block vital maritime access.

The fighting has galvanized a refugee exodus, with more than 2.6 million people, mainly women and children, fleeing to neighboring countries. More than 1.5 million have arrived in Poland alone, which has appealed for more international help in caring for them.

The latest diplomatic efforts to stem the Russian onslaught again resulted in failure. French President Emmanuel Macron and German Chancellor Olaf Scholz both spoke Saturday with Russian President Vladimir Putin and reported no progress. The Kremlin has demanded that Ukraine renounce future attempts to join NATO, demilitarize and acknowledge Russian sovereignty over the Crimean peninsula, which Russia seized in 2014.

Ukrainian President Volodymyr Zelensky, who has rallied compatriots in staging a fierce resistance to the Russian invasion, declared in his latest video address that Ukraine would ultimately prevail.

“Ukraine will stand this test,” he said Saturday evening. “We need time and strength to break the war machine that has come to our land.”

The targeted Ukrainian base, some 11 miles from the Polish border and 26 miles northwest of Lviv, was used before the war for training of Ukrainian troops by NATO forces, and is now a logistical hub and training center for arriving foreign volunteers. Its proximity to the frontier raises the specter that Russia may seek to block a crucial artery for both humanitarian supplies and shipments of weaponry.

Elsewhere in western Ukraine, Ivano-Frankivsk Mayor Ruslan Martinsiv said in a Facebook post that Russian missiles had targeted the city airport for a third time.

“I remind you that the goal of the enemy is to sow panic and fear,” he wrote.

The strikes point to a growing offensive in Ukraine’s west, a part of the country that had mostly been spared the devastation seen elsewhere. Last week, Russian forces struck Lutsk airport, roughly 70 miles from the Polish border.

In Lviv, the biggest city in western Ukraine, which has become a refuge and a transit point for those seeking to escape the fighting, air raid sirens wailed Sunday, hours after the attack on the base.

The base strike prompted warnings from Ukrainian officials about the potential for the conflict spilling over into the territory of the North Atlantic Treaty Organization. Kozytskyi, head of the Lviv regional administration, wrote on a Telegram channel that bombardment “is approaching the borders of NATO countries.”

Sadovyi, the Lviv mayor, directly addressed President Biden and the NATO chief in warning of prospects for a spillover. “Joe Biden, Jens Stoltenberg, do you understand that war is closer than you imagine?” he wrote on Facebook. “Russia is already on your border.”

Sunday brought a new peace appeal from Pope Francis, who has called for an immediate halt to the Russian invasion.

Faced with the prospect of a drawn-out conflict, Ukrainian officials voiced concern about basic supplies. Ukrainian Prime Minister Denys Shmygal said in an address on Saturday that the government has restricted export of “food-critical goods” including wheat, eggs, oil and sugar.

“Currently, the balance shows that Ukraine is provided with basic foodstuffs in the coming months,” he said. “But we must also think about the future.”

Bulos reported from Kyiv and King from Washington.