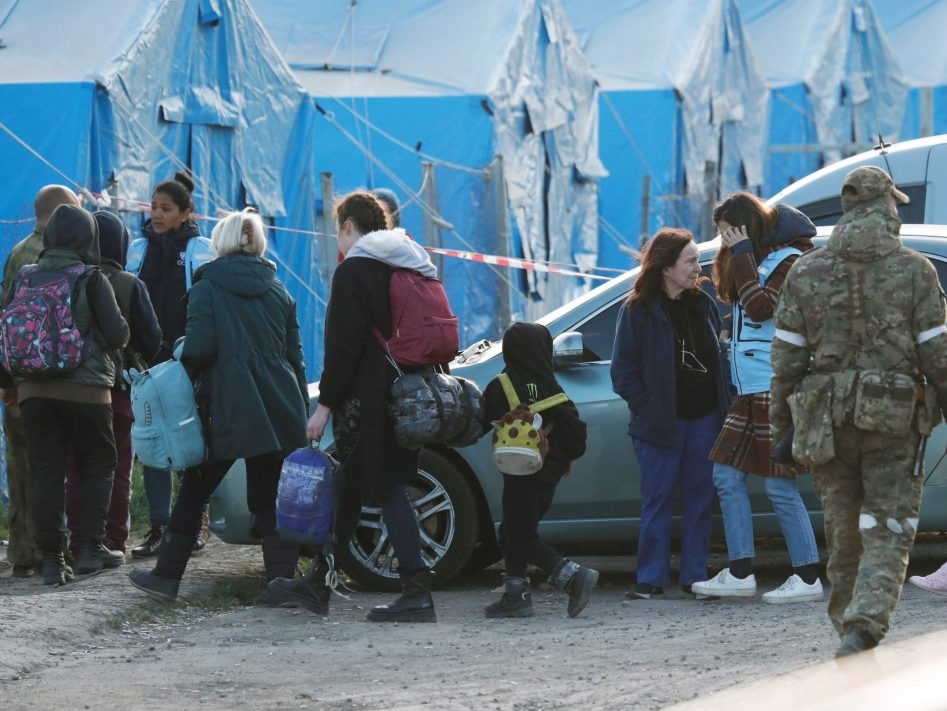 KYIV — All women, children and elderly civilians have been evacuated from the Azovstal steel plant in Mariupol, Ukraine’s deputy prime minister said on Saturday, despite what military officers described as an ongoing Russian assault on factory.

“This part of the Mariupol humanitarian operation is over,” Deputy Prime Minister Iryna Vereshchuk wrote on the Telegram messaging app.

The Soviet-era steelworks, the last stronghold in Mariupol for Ukrainian forces, has become a symbol of resistance to the wider Russian effort to capture swaths of eastern and southern Ukraine in the during the 10 week war.

Under heavy shelling, fighters and civilians have been trapped for weeks in deep bunkers and tunnels that criss-cross the site, with little food, water or medicine.

Russian forces backed by tanks and artillery tried again on Saturday to storm Azovstal, Ukraine’s military command said, in a fierce assault aimed at dislodging the last Ukrainian defenders in the port city strategy of the Sea of ​​Azov.

Mariupol was left in ruins by weeks of Russian bombardment, and the steelworks were largely destroyed. Several groups of civilians have left the sprawling compound over the past week during breaks in the fighting.

However, as of 7 p.m. local time, Reuters reporters had seen no sign of their arrival at a reception center in separatist-held territory near Mariupol.

The separatists said a total of 176 civilians had now been evacuated from the factory.

Evacuations of civilians from the Azovstal plant – brokered by the United Nations and the International Committee of the Red Cross (ICRC) – began last weekend. But they were stopped during the week by new fighting.

The city’s mayor estimated earlier this week that 200 civilians were trapped at the plant.

It was unclear after the Deputy Prime Minister’s statement on Saturday whether any civilian men were still at the compound.

President Volodymyr Zelenskiy said in a late evening video address Friday that Ukraine was also working on a diplomatic effort to rescue the fighters barricaded inside the steel mill. It is not known how many fighters remained there.

The fighters have sworn not to surrender. Ukrainian officials fear Russian forces will want to wipe them out by Monday, in time for commemorations in Moscow of the Soviet Union’s victory over Nazi Germany in World War II.

President Vladimir Putin declared victory in Mariupol on April 21, ordered the plant closed and called on Ukrainian forces inside to disarm. But then Russia resumed its assault on the factory.

Asked about Russia’s plans to mark Monday’s anniversary in parts of Ukraine it holds, Kremlin spokesman Dmitry Peskov said on Friday “The time will come to mark Victory Day in Mariupol”.

BATTLE FOR THE EAST

Moscow calls its actions since February 24 a “special military operation” to disarm Ukraine and rid it of what it calls anti-Russian nationalism fomented by the West. Ukraine and the West say Russia has launched an unprovoked war.

Mariupol, which lies between the Crimean peninsula seized by Moscow in 2014 and parts of eastern Ukraine taken by Russian-backed separatists that year, is key to linking the two Russian-held territories and block Ukrainian exports.

The Ukrainian General Staff said on Saturday that the Russian offensive in eastern Ukraine was aimed at establishing full control over the Donetsk and Luhansk regions and maintaining the land corridor between these territories and Crimea.

However, Russian forces lost control of the village of Tsyrkuny in the Kharkiv region, the military command said.

The Russian Defense Ministry said it destroyed a large stockpile of military equipment from the United States and European countries near the Bohodukhiv railway station in the Kharkiv region.

Ukrainian forces on Saturday released footage they said showed drone strikes on a Russian landing craft and a building housing missiles on Zmiinyi (Serpent) Island, a patch of land south of Odessa. He did not say when the strike happened.

Reuters could not independently verify the statements of either party regarding the events on the battlefield.

The speaker of Russia’s lower house of parliament, Vyacheslav Volodin, on Saturday accused Washington of coordinating military operations in Ukraine, which he said amounted to direct US involvement in military action against Russia.

US officials said the United States provided intelligence to Ukraine to help counter the Russian onslaught, but denied that the intelligence included accurate targeting data.

Since the start of the invasion, Washington and European members of the transatlantic NATO alliance have provided kyiv with heavy weapons to help it resist Russia, and Western powers have also imposed heavy sanctions on Moscow.

However, the United States and its NATO allies have repeatedly declared that they will not participate in the fight themselves, in order to avoid becoming parties to the conflict.

A senior Russian commander said last month that Russia planned to take full control of southern Ukraine, which would improve Russia’s access to Transnistria, a breakaway region of Moldova.

Pro-Russian separatists in Moldova said on Saturday that Transnistria had been hit four times by suspected drones overnight near the Ukrainian border. Nearly two weeks of similar incidents reported in Transnistria have raised international alarm that the war in Ukraine could spill over the border.

Ukraine has repeatedly denied responsibility for the incidents, saying it believes Russia was staging attacks to provoke war. Moscow also denied any responsibility.