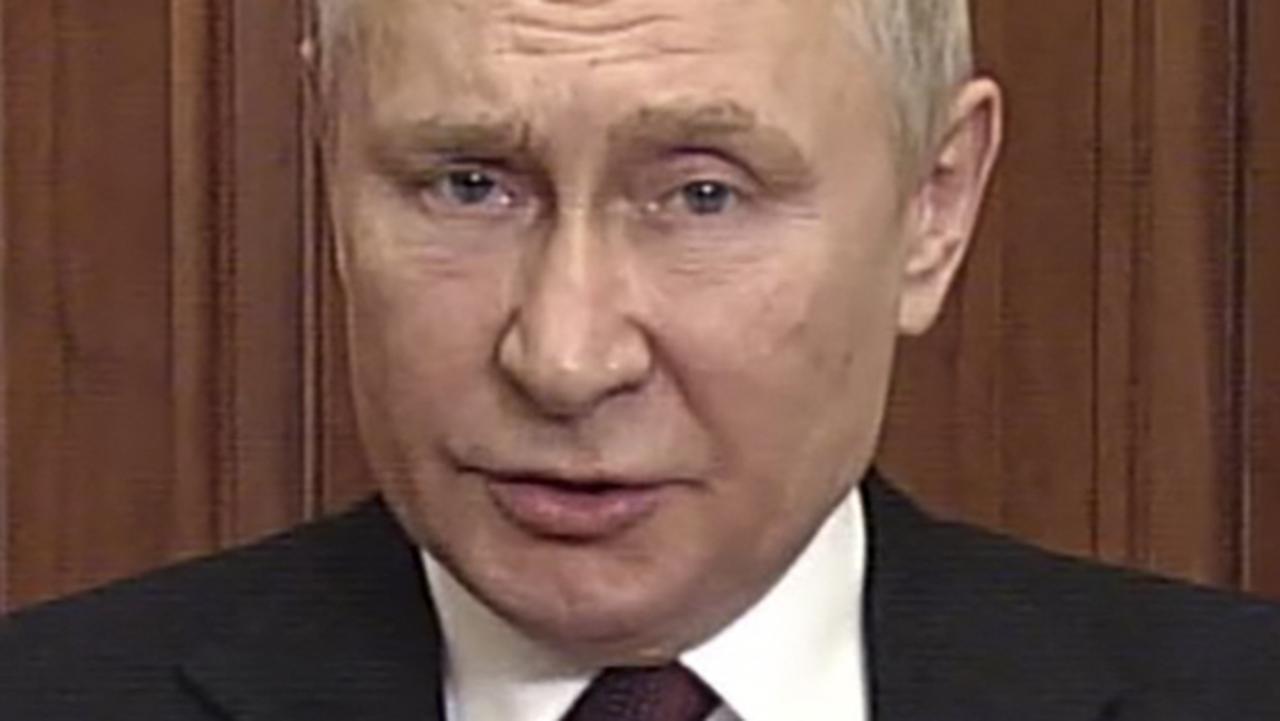 It’s hard to find any positives amid the atrocities being committed in Ukraine. But the shattering of one Putin myth is one of them.

It is hard to find any positives amid the atrocities unfolding in Ukraine. But here’s one: the myth of Vladimir Putin, strong and cunning leader, has been irrevocably shattered. Finally, belatedly, the world sees him clearly.

One of the most strikingly honest things I’ve read about the invasion in these past few days was from Sergei Dobrynin, one of the leading investigative reporters in Russia.

“I thought Putin’s cunning was undeniable. And that is why, when US intelligence started saying that Putin would invade Ukraine, I didn’t believe it,” said Dobrynin, writing for US publication The Atlantic.

“Despite all my reporting experience, everything I had seen, I thought it was nonsense. I was almost angry. I couldn’t see any logical reason, any advantage, any positive outcome of the invasion. It was painfully obvious that a war would be catastrophic.

“I told myself, ‘Putin is evil. But he is not an idiot.’ That’s what I kept telling myself right up until the night of February 24.”

Dobrynin was not alone in his misguided assessment of Russia’s dictator. For two decades, a succession of US presidents deluded themselves into thinking Putin was a rational actor; someone they could convince to play by the rules through gentle diplomacy.

“I looked at the man in the eye. I found him to be very straightforward and trustworthy,” George W. Bush infamously said all the way back in 2001. He added that Putin was “deeply committed” to “the best interests of his country”.

“I was able to get a sense of his soul.”

The next US administration, under Barack Obama, naively tried to “reset” its relations with Russia. Mr Obama was caught on a hot mic before the 2012 election reassuring Putin’s puppet, the outgoing president Dmitri Medvedev, that he would have “more flexibility” to deal with Russia after facing America’s voters for the last time. In other words, when he was no longer accountable to them.

If the Obama administration and its allies in Europe had responded to the annexation of Crimea in 2014 with the sort of severe sanctions that have finally been imposed on Russia now, the current invasion of Ukraine may well have been avoided.

Joe Biden is complicit in that failure, as he was Mr Obama’s vice president. He agreed to hold a bilateral summit with Putin early in his own presidency, which achieved little.

We also had Donald Trump, of course, whose long history of sucking up to Putin is well documented. Having called Putin a “strong” and “powerful” leader for years, Mr Trump’s initial response to the invasion was to label him “savvy” and a “genius”.

A few weeks later, that assessment is laughable. The Russian military has exposed its own incompetence. He has managed to be thoroughly outsmarted, out-organized and outfought by a numerically inferior force.

Putin has led his country into a no-win situation. Whatever happens from this point onward, the people of Ukraine will hate and resist their Russian occupiers. Russia is a pariah state, shunned by the Western world. Its currency is worthless.

Twenty years of economic progress have been wiped out in a fortnight. Russia’s people will suffer greatly as a result.

Let me put that more bluntly: Putin, the supposedly savvy leader with his nation’s “best interests” at heart, has thoroughly screwed over his own people for no good reason.

Meanwhile NATO – the alliance Putin was trying to weaken and intimidate – is more united than it’s been in many years.

So that’s one level of the Putin delusion gone: the idea that he does evil things, but is at least intelligent and rational, and can be dealt with as such.

More troubling is the moral delusion regarding Putin. We’ve seen this from left-wing anti-US types, who reflexively think any enemy of so-called American imperialism is a friend. But in recent times it has been far more pervasive among Western conservatives.

If you want to know how so many people on the political right managed to convince themselves that a murderous dictator was worthy of their admiration, I suggest looking up a speech Putin delivered in October of last year, which earned him a surge of attention, most of which was positive.

In that speech, Putin essentially bulldozed into the Western culture wars. He condemned the “social and cultural shocks” happening throughout the world’s democracies.

He accused other nations of “blotting out whole pages” of their own history. He railed against affirmative action for minorities and “the requirement to renounce the traditional interpretation of such basic values ​​as mother, father, family, and the distinction between sexes”.

Among the “sociological disturbances” bothering him from afar were “reverse discrimination”, “cancel culture” and the “simply monstrous” prospect of transgender children.

This is the speech that led a leading conservative writer in the United States, Rod Dreher, to declare: “Putin gets it. Why don’t we?”

It’s the attitude that won admiration from political leaders like Marine Le Pen, Matteo Salvini and Victor Orban (who have all, by the way, been forced to sheepishly walk back their praise for Putin since the invasion began).

This is what happens when you reduce everything to culture war nonsense. You lose all perspective. In this warped reality, transgender children become a greater threat to civilization than naked authoritarianism, and somehow worthier of our outrage.

How many pampered Australians have spent the past two years whining about “tyranny” because they were required to wear a piece of cloth on their face, or take a vaccine that could save lives, including their own?

Real tyranny was on display all along, in Russia, and China, and North Korea. It’s still on display now. Thousands of ordinary Russians have already been arrested for protesting against the war in Ukraine, for expressing their freedom of speech.

That is Putin’s Russia. That is the regime for which too many Western conservatives have spent the past decade, or longer, making excuses.

And while we’re talking about Putin myths, let’s discuss the concept of strength.

Watching the Russian military fall on its face these past few weeks, I’ve been reminded of a snarky tweet American Senator Ted Cruz sent in May of last year.

Mr. Cruz, a conservative Republican, was comparing two military recruitment ads, one of them from his own country and the other from Russia.

The Russian military’s ad showcased buff men doing push-ups and aiming guns, while the American one focused on the US army’s diversity. It featured the story of a female soldier who was raised by two mothers.

Mr. Cruz admired the Russian ad, and expressed contempt for the American one.

“Holy crap. Perhaps a woke, emasculated military is not the best idea,” he said.

The idea that welcoming women with lesbian parents into the military will somehow weaken it is nonsense. This isn’t 300. Modern wars are won with brains as well as brawn. For every frontline soldier there is a technician, an engineer, or any number of people whose job is no less essential. Recruiting from as wide a pool of talent as possible makes sense, and that means making it clear that everyone is welcome.

Look at how the Russian military has performed in Ukraine, and you’ll see how little being anti-woke matters on the field of battle.

But this all comes back to that obsession among Western conservatives: that “wokeness” is weakness, and is turning the world’s liberal democracies into pathetic pushovers.

This is how Donald Trump – a chronically vain, petty, thin-skinned, selfish human being – came to be worshiped as some bastion of strength and masculinity in the US. It’s the difference between performative strength and real strength.

The Trumpian version of strength is to be a prick to everyone. Never apologise, never admit fault, insult anyone who challenges you. It’s “America First”. It’s the stubborn refusal to show compassion for your fellow human beings, whether that means labeling immigrants as rapists or taking umbrage at something as harmless as addressing someone by their preferred pronouns.

It’s what led Mr Trump to spend his time threatening to withdraw from NATO, because member states weren’t spending enough on defence, while praising the anti-woke dictators who flattered him.

It’s what led him to conclude that Putin was “very, very strong”.

Being so terrified of homosexuality that you essentially outlaw talking about it is not strength. It is weakness.

It took the West a long time, far too long, to show genuine strength in the face of Putin’s crimes. Now, through the sort of mature, collaborative, multilateral diplomacy Mr Trump spent years dismissing as stupid, we have finally got there.

Meanwhile, the Ukrainians – supposedly a victim of the woke, weakened West, if you believe Putin – have shown us what true strength looks like.

Let’s remember what it looks like. And the next time a tinpot dictator pretends to be a “strongman”, we won’t fall for the illusion.