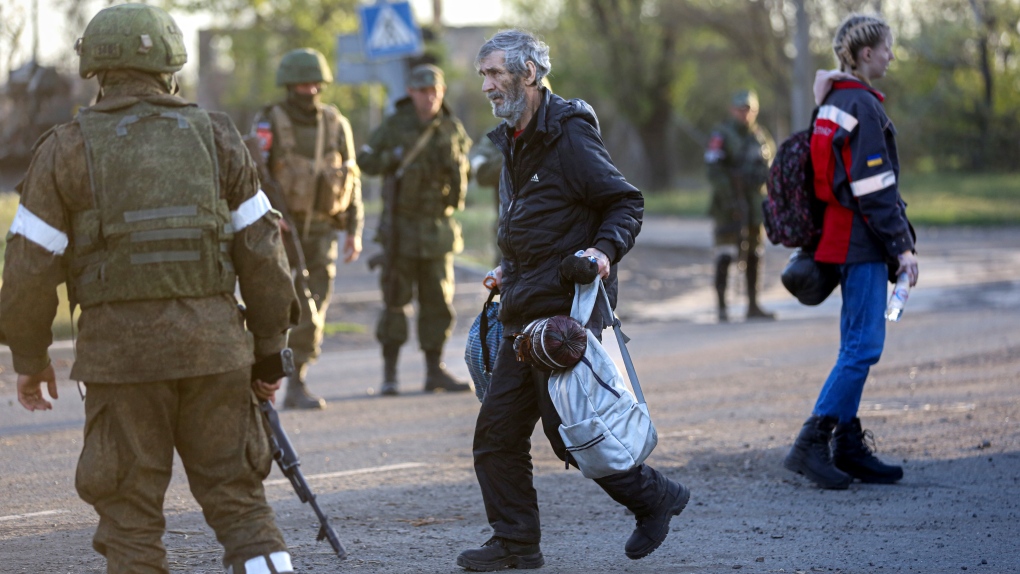 Russian forces fired cruise missiles at the southern Ukrainian city of Odessa on Saturday and shelled a beleaguered steel mill in Mariupol, hoping to complete their conquest of the port in time for the celebrations of the Victory Day. Ukraine announced that all women, children and the elderly had been evacuated from the mill, a key Russian war objective.

US Secretary of State Antony Blinken said on Saturday that Zelenskyy and his people “embodied the spirit of those who prevailed in World War II.” He accused Russian President Vladimir Putin of trying to “distort history in an attempt to justify his unprovoked and brutal war against Ukraine”.

Satellite photos analyzed by The Associated Press showed Ukraine targeting Russian-held Snake Island in an effort to obstruct Russian efforts to control the Black Sea. An image taken early Saturday by Planet Labs PBC showed most of the buildings on the island had been destroyed by Ukrainian drone attacks, as well as what appeared to be a Serna-class landing craft against the north beach of the Isle.

Kharkiv, which was the first Soviet capital in Ukraine and had a pre-war population of around 1.4 million, remained a key Russian bombing target in the northeast. Russian Defense Ministry spokesman Major General Igor Konashenkov said on Saturday that the Russian military also touched large arms shipments from the United States and other Western countries with Iskander missiles in the region. His claims could not be independently verified.

But Western military analysts said Ukrainian forces were making progress in securing positions around the town. The Ukrainian army said it had regained control of five villages in the region and part of a sixth.

A Washington-based think tank, the Institute for the Study of War, said in its latest assessment that Ukraine may be able to push Russian forces “out of Kharkiv’s artillery range in the coming days. “, offering respite to City and an opportunity to build the defenders’ momentum “into a successful and wider counter-offensive”.

Also on Saturday, a Russian missile destroyed a national museum in the Kharkiv region dedicated to the life and work of 18th-century philosopher Gregory Skovoroda, the local council said. He posted photos on Facebook showing the building engulfed in flames.

And in another eastern region, Luhansk, Governor Serhiy Haidai said two boys aged 11 and 14 were killed by Russian shelling in the town of Pryvillia, while two girls aged 8 and 12 and a woman 69 years old had been injured.


Gambrell reported from Lviv, Ukraine. Yesica Fisch in Bakhmut, David Keyton in Kyiv, Yuras Karmanau in Lviv, Mstyslav Chernov in Kharkiv, Lolita C. Baldor in Washington, and AP staff around the world contributed to this report.


Do you have any questions about the attack on Ukraine? E-mail dotcom@bellmedia.ca.