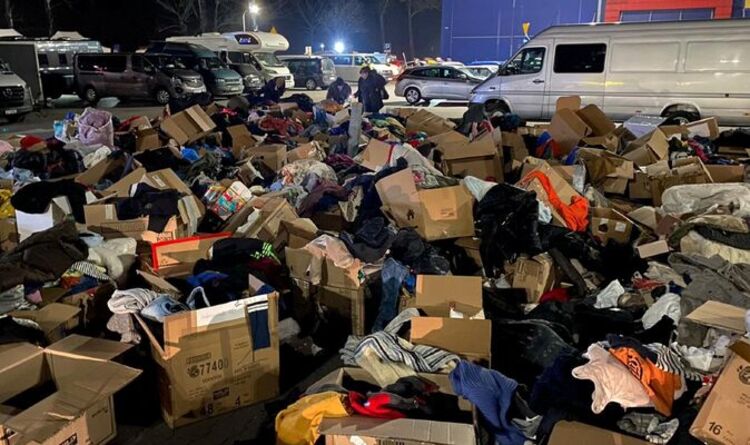 Images show heaps of clothing and bedding being cast aside in the border town of Medyka, near Przemysl in Poland. The snaps were taken by 27-year-old volunteer Charlie Hammerton who claims the donations arrive by the truckload from all over Europe, but volunteers lack the time to sift through unsorted boxes.

The aid worker said labeled and sorted boxes that include priority required goods – like sanitary towels and nappies – are taken to a nearby warehouse and handed out to Ukrainian refugees.

However, he added that boxes of assorted clothing have been left abandoned in a nearby car park – because staff haven’t got the time to sort through them.

Mr Hammerton from Falmouth, Cornwall, also noted that most refugees are arriving on foot and don’t have enough time at the border point to sift through the donated clothes.

He also added that those fleeing Ukraine can only take what they can carry from the border point and often have to prioritize other items.

Charlie saw the boxes abandoned during his work in Medyka, Poland, on Wednesday and Thursday last week.

He said that similar scenes of dumped goods are evident across nearly every border crossing point.

He urged well-meaning members of the public to not send any more clothing donations.

Instead, he asked them to consider donated things deemed as high-priority including nappies and blankets.

READ MORE: How to rehome a Ukrainian refugee – How to apply, checks and fee

“I took four people to Berlin for example on my way home.

“You just turn up, get your details written down – often badly, and then they say to go and find people to take with you.”

He said: “Volunteers and refugees just don’t have the time to sift through packages of clothes and say ‘oh that’s nice I’ll take it with me to Spain’ or wherever.

“They just sort of get on a coach and go.

“What they need is nappies, sanitary towels, blankets, really useful things that have a one time use – consumables I guess.”

The pile-up of stock comes after a number of humanitarian charities urged well-wishers to donate money to a reputable charity, rather than send miscellaneous donated items.

However, Charlie said that further boxes of clothes, buggies and bedding are abandoned in the car park each day, and now heaps of donations fill car parks along the border.

Charlie referred to the refugees currently arriving in Poland, Moldova, Slovakia and other border countries as “the lucky ones” who have been able to escape.

He added that even though these people have money and cars, they still have to walk across the border with only what they can carry.

“I found myself giving things on the border to the refugees crossing over.

“There are kids that literally walk for days.

“They might lose their families or might be orphans, they just walk to the border with no food and in whatever they are wearing.”