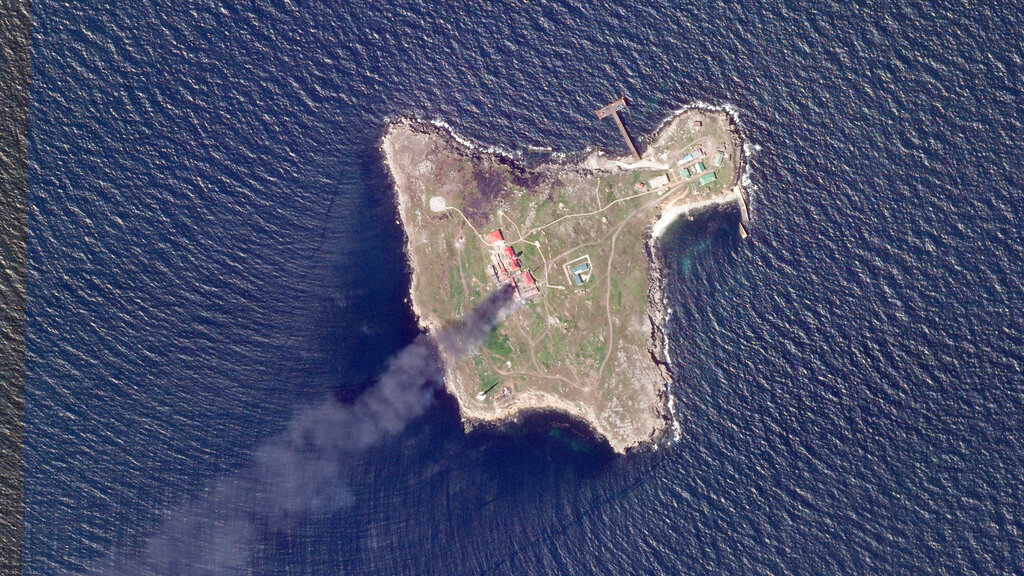 ZAPORIZHZHIA, Ukraine – The war in Ukraine ravaged the country’s southern coast on Saturday as Russian forces fired cruise missiles at the city of Odessa and shelled a steel mill housing Ukrainian civilians and fighters, hoping to complete their conquest of the port of Mariupol in time for Victory Day celebrations.

However, in a sign of the unexpectedly effective defense that sustained the fighting until its eleventh week, the Ukrainian army crushed Russian positions on a Black Sea island that was captured in the early days of the war. and became a symbol of Ukrainian resistance.

Western military analysts said a Ukrainian counteroffensive was also advancing around the country’s second city, Kharkiv, even as it remained a key Russian bombing target. The Ukrainian military said it had regained control of five villages and part of a sixth near hotly contested Kharkiv.

“As war once again rages in Europe, we must strengthen our resolve to stand up to those who now seek to manipulate historical memory in order to advance their own ambitions,” Blinken said in a statement released as the United States United and the United Kingdom marked the Allied victory in Europe 77 years ago.

The most intense battles in recent days have taken place in eastern Ukraine, where both sides are entrenched in a fierce race to capture or reclaim territory. Moscow’s offensive in eastern Ukraine has focused on reclaiming the industrial Donbass region, where Russian-backed separatists have been fighting since 2014 and occupy some areas.

Moscow has also sought to sweep across southern Ukraine both to cut the country off from the sea and to connect its territory to the breakaway region of Transnistria in Moldova, long a home of Russian troops. But he struggled to achieve those goals.

On Saturday, six Russian cruise missiles fired from planes hit the Odessa region, where authorities have put in place a curfew until Tuesday morning. Videos posted on social media showed thick black smoke rising over Odessa with sirens wailing in the background.

Satellite photos analyzed by The Associated Press showed Ukraine targeting the Russian-held Snake Island in an attempt to obstruct Russian efforts to control the Black Sea. A satellite image taken early Saturday by Planet Labs PBC showed what appeared to be a Serna-class landing craft against the island’s north beach.

Against this background, Ukrainian fighters took a final stand to prevent a complete takeover of Mariupol. Securing the strategically important Sea of ​​Azov port would give Moscow a land bridge to the Crimean peninsula, which Russia annexed from Ukraine in a 2014 invasion.

New satellite photos analyzed by the AP showed vast devastation at a sprawling seaside steelworks that is the last corner of Ukrainian resistance in the city. The Azovstal factory buildings, including one that is believed to be hiding hundreds of fighters and civilians, had large gaping holes in the roof, according to footage shot Friday by Planet Labs PBC.

The shelling of the steelworks has intensified in recent days despite a Russian promise of a temporary ceasefire to allow civilians inside to escape. Russia used mortars, artillery, truck-mounted rocket systems, aerial bombardment and shelling from the sea to target the facility.

Rescuers sought to evacuate more civilians on Saturday after a week of intermittent convoys to get people out of Mariupol. Dozens of civilians were handed over to the care of representatives of the United Nations and the International Committee of the Red Cross on Friday, Russian and Ukrainian officials confirmed.

The latest evacuees followed around 500 others who were allowed to leave the factory and other parts of the city in recent days.

Ukrainian fighters at the Azovstal plant have repeatedly refused to surrender but on Saturday admitted using white flags to help evacuate civilians from the site. The fighters released a statement via social media saying they and the Russians used a white flag system to stop the fighting to get civilians out.

They said Saturday’s incident marked the fourth time they had raised flags for this purpose. The statement followed comments attributed to a commander on the Russian side suggesting the Ukrainians were using the white flag to negotiate with their attackers.

The Ukrainian government has called on international organizations to also help evacuate the fighters defending the factory. According to Russia’s most recent estimate, about 2,000 Ukrainian fighters remained in the Azovstal steelworks. They repeatedly refused to surrender.

“They really need our help,” said Serhii Kuzmenko, 31, who fled with his wife, 8-year-old daughter and four others from their bunker, leaving 30 others behind. “We have to get them out.”

Kharkiv, which was the first Soviet capital in Ukraine and had a pre-war population of around 1.4 million, remained a key Russian bombing target in the northeast. But Western military analysts said Ukrainian forces were making progress in securing positions around the town.

A Washington-based think tank, the Institute for the Study of War, said in its latest assessment that the Ukrainian military may be able to push Russian forces “out of Kharkiv’s artillery range in the coming days”, offering respite to the city. and an opportunity to build defenders’ momentum “into a successful, wider counter-offensive”.

Separately, a Russian missile on Saturday destroyed a Ukrainian national museum dedicated to the life and work of an 18th-century philosopher, the local council said. He posted photographs on Facebook showing the Gregory Skovoroda Museum engulfed in flames.

Zelenskyy said in his nightly address that “the extraordinary strength of the Ukrainian position” lies in the fact that all countries in the free world understand what is at stake in the ruinous war.

At the United Nations in New York, the UN Security Council unanimously adopted its first statement on Ukraine on Friday, expressing “strong support” for the secretary-general’s efforts to find a peaceful solution to the “dispute”. 10 weeks old.

Talks to end the war have stalled. Zelenskyy said on Friday he would be open to negotiations with Russia, but only if Moscow withdraws its forces to pre-invasion positions.

“In this situation, we can start talking normally,” Zelenskyy said during a meeting at the Chatham House think tank in London. Ukraine could then use “diplomatic channels” to regain its territory, he said.