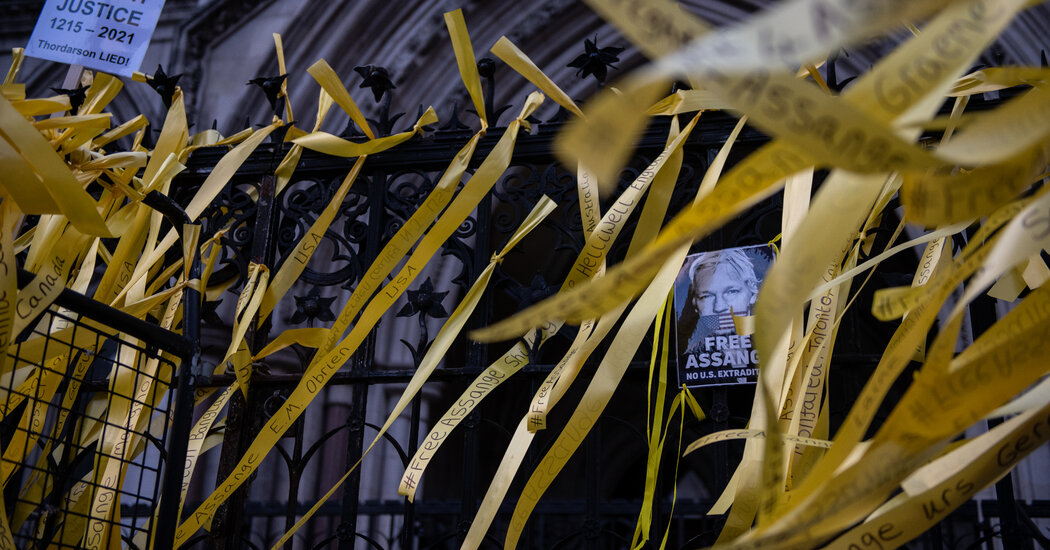 LONDON — Britain’s Supreme Court on Monday said it had refused the latest appeal by Julian Assange, the embattled WikiLeaks founder, to prevent his extradition to the United States.

The announcement was a blow to Mr. Assange, coming just months after a high court said he would be able to appeal a decision by a lower court that would allow for his extradition. However, he has still not exhausted all of his legal options in the British courts, his lawyers said.

The Supreme Court in a statement Monday said that it had refused permission to appeal “because the application does not raise an arguable point of law.”

“It is extremely disappointing that the UK Supreme Court is unwilling to hear an appeal of an issue that the UK High Court had already deemed to be of great public importance,” Mr. Pollack said. “Mr. Assange will continue the legal process fighting his extradition to the United States to face criminal charges for publishing truthful and newsworthy information.”

Mr. Assange’s legal team in London indicated that the decision on extradition would now be referred back to the lower court that originally assessed the US request, which would then put the final decision in front of Priti Patel, the UK’s home secretary.

Ms. Patel would then decide whether to order or refuse the extradition, but Mr. Assange’s defense team will also be entitled to make submissions to her before she issues a decision. A spokesperson for the Home Office said it was up to the court to consider extradition cases, and declined to comment on its findings.

A US Justice Department spokesman also declined to comment.

Crucially, the Birnberg Peirce law firm, which is representing Mr. Assange in Britain, said he had not exhausted his ability to appeal in regard to “other important issues he raised previously” in that lower court decision.

The firm said it regretted “that the opportunity has not been taken to consider the troubling circumstances in which requesting states can provide caveated guarantees after the conclusion of a full evidential hearing.”

The firm’s statement referred to the initial argument for appeal, which had turned on the timing of when the United States made assurances that Mr. Assange would be treated humanely in an American prison if found guilty.

“In Mr. Assange’s case, the court had found that there was a real risk of prohibited treatment in the event of his onwards extradition,” the firm said.

The Case Against Julian Assange

What are the criminal charges brought on by the US? After his expulsion from the embassy, ​​the US unsealed an indictment against Mr. Assange and sought his extradition. Prosecutors have accused him of violating the Espionage Act for his role in the 2010 disclosures and of participating in a hacking conspiracy. (He is not charged for the publication of the DNC emails in 2016.)

Why does his case raise media freedom issues? The solicitation and publication of government secrets is a journalistic-style activity, whether or not Mr. Assange counts as a journalist. That raises novel First Amendment issues and could establish a previous constraining investigative journalism about military, intelligence and diplomatic matters.

Where is Mr Assange now? After he was expelled from the embassy, ​​he was sentenced to 50 weeks in jail in London for for breaching bail conditions related to the rape inquiry; he has remained in prison while the US extradition case is pending.

Can the US extradite him? In January, a court rejected the US extradition request on the grounds that Mr. Assange might be driven to suicide by American prison conditions. The Trump administration appealed, and the Biden administration later made assurances of humane treatment. On Dec. 10, a higher court ruled that Mr. Assange can be extradited. His lawyer said they will seek to appeal.

Mr. Assange was charged in the United States under the Espionage Act in connection with obtaining and publishing secret government documents centered around US actions during the wars in Afghanistan and Iraq. They were published on WikiLeaks in 2010 after being leaked by Chelsea Manning, a former military intelligence analyst.

In 2019, Mr. Assange was arrested in London after spending years holed up inside the Ecuadorean embassy in the city. In January 2021, a lower court judge ruled that Mr. Assange could not be sent to the United States to stand trial because there was no guarantee that he would be cared for and he was in a fragile mental state.

But last December, a high court reversed that decision, saying that the United States had made ample assurances that Mr. Assange would receive proper care. In January, the High Court ruled that he could appeal the decision to the Supreme Court on a narrow point — the timing on when the United States gave those assurances about humane treatment. Monday’s announcement means that the Supreme Court has denied that appeal.

If Mr. Assange were extradited to the United States and faced a trial, the case could raise profound First Amendment issues. His prosecution has alarmed advocates of press freedom.