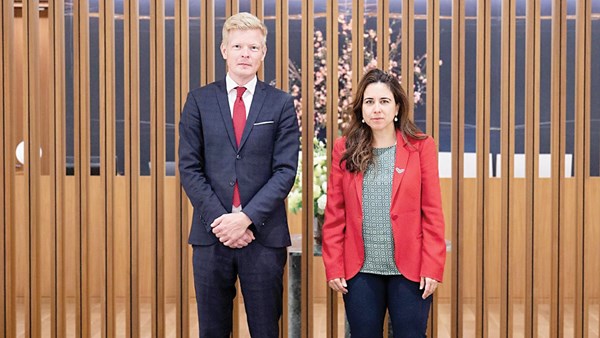 Her Excellency Ambassador Lana Zaki Nusseibeh, Permanent Representative of the United Arab Emirates to the United Nations, stressed the need to open the main roads in Taiz, and to consolidate and build on recent achievements.
During a meeting in New York with the UN envoy to Yemen, Hans Grundberg, she stressed the need to reach a comprehensive political solution, essential to alleviate the suffering of the Yemeni people. The United Nations envoy to Yemen, Hans Grundberg, urged at a Security Council meeting on Tuesday evening Wednesday the Houthi militia to accept the reopening of roads leading to the besieged city of Taiz in the southwest from the country.
Meanwhile, Ambassador Nusseibeh met with Ambassador Riyad Mansour, Permanent Observer of Palestine to the United Nations, where she affirmed the support of the United Arab Emirates for the Palestinian cause and its support for the brotherly Palestinian people in the restoration of his inalienable rights.
In addition, the United Arab Emirates affirmed, during a meeting of the Security Council yesterday, the essential role of regional organizations in the implementation of the UN agenda on women, peace and security.
She highlighted the need to focus on 3 main areas, namely strengthening partnerships, local security and leadership that responds to the needs of women.
During her address to the council, Her Excellency Ambassador Nusseibeh noted, “My discussions with a group of Afghan women in 2021 demonstrated the importance of embracing local cultural contexts when discussing women, peace and Security”.
“When conflict erupts, it rarely directly affects the groups involved in it, but rather the regional organizations closest to the situation that have a deep understanding of the dynamics of the conflict and its fallout,” she said. declared, emphasizing that “the role of these organizations is essential during the continuation of the conflict, and it is also a key to deal with temporary crises.” borders, including the influx of refugees and internally displaced persons, terrorist attacks and food insecurity.
“Unfortunately, all these problems that we are currently facing in the world,” she added.
She underscored the need for indicators and funding for organizations concerned with women at all levels before the outbreak of conflict, noting that deepening partnerships between regional organizations and local women leaders would strengthen their role in resolving conflicts. conflict, preventive diplomacy, peacekeeping and peacebuilding.
She noted that regional security frameworks need to include diverse religious and local spectrums to ensure they are widely accepted and gain trust, explaining that this not only means continued investment in training “women peacemakers, watchdogs and responsible for the protection of local areas, but also the inclusion of local dynamics in the design and implementation of security sector reforms.
She believed that the combination of accurate local conflict knowledge and international security training can form comprehensive frameworks for conflict resolution and response for all conflict-affected groups, especially women and girls.
She called for the appointment of women to the highest positions as part of promoting women-sensitive leadership, and this must include women in specific positions in order to be able to advocate for women, peace and security, as well as management positions. in general. He called on the international community to work on this issue.