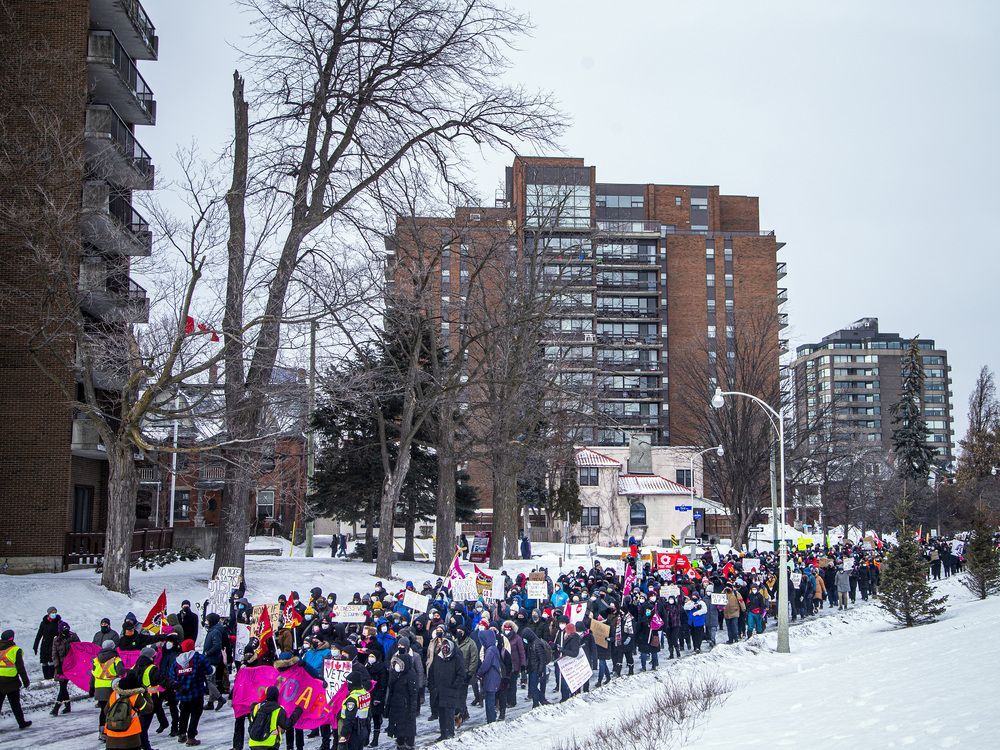 Ottawa’s silent, impatient majority took to the streets Saturday to urge police to put an end to the occupation of the city’s downtown, now into its third weekend of law-defying mirth and mayhem.

More than 2,000 counter-protesters marched in the Glebe on Saturday afternoon, chanting “Whose streets? Our streets!” while, only a few kilometers to the north, the city’s downtown core remained occupied by a phalanx of trucks and thousands of people opposed to vaccine mandates.

On Saturday morning, hundreds of supporters poured into downtown, where a festive atmosphere prevailed following a Friday evening concert on Wellington Street.

Many of the counter-protesters expressed deep dismay at the way Ottawa Police Chief Peter Sloly has handled the situation.

Carrying a sign that read, “Hurry up Sloly,” Martin Callsen of Nepean said he joined Saturday’s counter-protest to give voice to the silent majority.

“It’s time to take back our city: This is not what our country is all about, this kind of hatred and division,” he said. “This whole thing has been so poorly managed: There’s no way any other G7 capital would allow these huge trucks that close to their seat of government.”

He said he wanted the police to take action, possibly with the support of the military. “The longer this goes on, the more difficult the solution,” Callsen said.

Bryan DeWalt of Ottawa said trucks had no right of assembly and he called on police to enforce the law by enacting a blockade.

Alex Silas, the Public Service Alliance of Canada’s regional executive vice-president for the National Capital Region, said the convoy protest was not about truckers or the working class.

“This convoy does not represent workers or working-class values,” he said. “Truckers are right now are delivering goods all over the country: They’re not in downtown Ottawa terrorizing our community.”

County Jeff Leiper joined Saturday’s counter-protest march. Like many residents, he said he felt both anger and disbelief when he saw reports of protesters holding a Friday night concert. He said the “red zone” had become more welcoming to occupiers rather than less during the past two weeks, and he called on police to act.

“Close the down the fun fair,” he implored on Twitter.

In an interview Saturday, Leiper said those occupying downtown Ottawa were acting with impunity. “I don’t know if it’s a deliberate provocation, but it certainly has been taken that way,” he said.

Ottawa police, he said, have not shared with city councilors the intelligence guiding their permissive approach to the two-week-old occupation. “But we’re at wit’s end and we’re looking for action.”

Nazim Khan, an Uber driver, said he had launched a hunger strike that would last “until this lawlessness stops.” “Canada is bigger than the trucks,” he said. “They cannot come to the capital of this great country and run over the Canadian constitution.”

Earlier Saturday, another contingent of counter-protesters gathered at Lansdowne Park with signs that read, “Truck Off,” and “Make Ottawa Boring Again.”

Clayton Goodwin, a military veteran, said he wanted the government to act against the protesters occupying downtown Ottawa. “We’ve lost our trust in our institutions, our police force,” he said. “Those that would use children as human shields and turn our flag upside down, torture our neighbors with noise, you can’t engage them: You have to act against them.”

“It’s a fantasy. They’re liberating our city from nothing. We have 92 per cent of the population vaccinated, and we’re waiting to open up so we can support our businesses,” he said.

“That extremist element needs to be gone,” he said. “If they just returned to peaceful protest, I feel like we could hash this out. I know some of them have legitimate grievances.”

Zak Klaas, a civil servant, said he joined Saturday morning’s counter-protest to show that “more people are opposed to the values ​​of the convoy than are supporting it.”

Sign up to receive daily headline news from Ottawa Citizen, a division of Postmedia Network Inc.