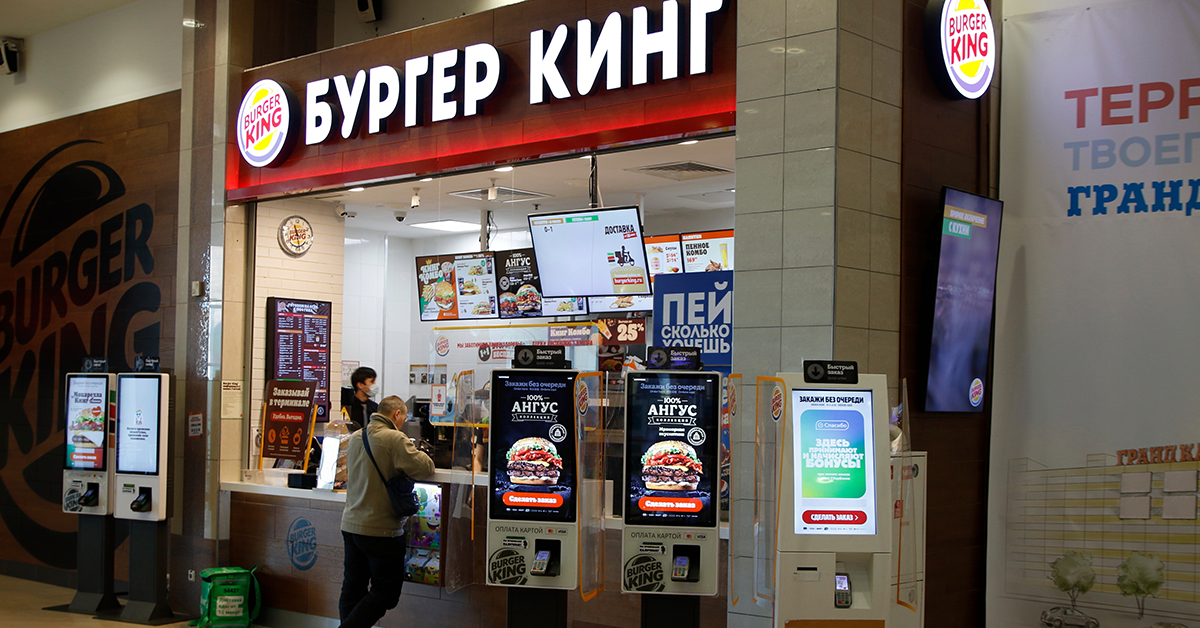 In the last three weeks, global companies like Apple, Netflix, McDonald’s, PayPal, Coca-Cola, H&M and Disney announced they are suspending or pulling back business in Russia in response to its invasion of Ukraine. Wall Street giants Goldman Sachs and JPMorgan also announced plans to move operations out of the country. More than 2.5 million Ukrainians have fled their homes so far, and as more international businesses cut ties with Russia pressure is mounting for the country to reach a diplomatic and peaceful resolution to the war.

Though the practice of imposing sanctions during war is not new, “for sanctions to be imposed at this level is, in some ways, unprecedented,” says Dimitry Anastakis, a professor of Canadian business history at the University of Toronto and Rotman School of Management . Russia is a major player in the world economy, and some of the companies extricating themselves are leaving millions, even billions, on the table. “It may not be clear until the event is a little bit further along, [but] when the dust settles, I think you’re going to see that there was a pretty tremendous impact,” Anastakis says.

In Canada, many business leaders have followed suit, with Shopify, McCain and Canada Goose among the companies that have announced they will no longer do business in Russia. And at least 100 Canadian business leaders are selling off their investments in Russian companies, and have asked others to do the same. These moves also signal that companies doing business in Russia have ethical responsibilities that, if neglected, will affect their reputations. “We often talk about corporate social responsibility,” says Anastakis. “Well, this is where the rubber hits the road.”

Aurel Braun, a professor of international relations and political science at the University of Toronto and associate of the Davis Center at Harvard University, says it has to be a combination of strategic and military factors that will determine whether Russia definitely fails its attempt to annex Ukraine —penalties are just one part of that. According to Braun, Russian president Vladimir Putin wants to rebuild an empire, and whether he can depends on what he and his countrymen are willing to forego. “If they get Ukraine, then Putin can sell the Russian people that these sacrifices were worth it,” he says. “It would pose a fundamental question to the Russian people: Do you want to be great again? Do you want to be secure again? Or do you want to use your Amex card, shop at luxury stores and go to IKEA?”

However, the soft power implications of companies refusing to do business in Russia can’t be understated. Once Japanese clothing retailer Uniqlo said it is closing its Russian stores, people lined up in a Moscow location to shop while they still had the chance, while videos of malls with shuttered storefronts have been shared online. “There’s no question that these kinds of decisions are going to make an impact in Russia itself, but also in people’s understanding of what’s going on,” says Anastakis.

As the situation continues to unfold on the ground, here are the Canadian companies that have suspended business or pulled out of Russia so far.

On March 8, Shopify, Canada’s largest e-commerce company, announced it would temporarily suspend operations in Russia and Belarus. “Shopify stands in support of all those directly affected by this crisis. We hope to see an immediate end to this tragic situation and a return to peace in Ukraine,” the company said in a statement.

In addition, the company is waiving fees for Ukrainian merchants and partners for the foreseeable future, and matching employee donations to Flexport, a freight company organizing shipments of relief goods to refugee sites across Eastern Europe.

McCain, the New Brunswick-based frozen food manufacturer, was set to open a new $212-million facility in the Tula Oblast region of Russia. But now the project has been discontinued permanently. “The Russian invasion of Ukraine has been deeply concerning to all of us at McCain Foods,” the company said in a statement. “Our thoughts continue to be with those affected by this crisis and we have done everything in our power to put the health and safety of our employees at the center of our response.”

The company is also halting shipments of McCain products to Russia, and donating $200,000 to the Red Cross Ukraine Humanitarian Crisis Appeal.

In an Instagram post on March 2, Canada Goose announced it was suspending all wholesale and e-commerce sales to Russia. “We stand with all of those who are impacted by the violence,” the company said in a statement. “We are supporting humanitarian efforts, providing aid to assist with the refugee crisis, and taking further actions to help.”

Mining company Kinross Gold Corporation suspended its most profitable mine operation on March 2. The Kupol gold mine in northeast Russia made US$443 million last year, and accounted for 23 per cent of Kinross’s production. “Kinross Gold Corporation is deeply concerned about the loss of life and destruction in Ukraine and wishes to express its sympathy and support for the people who are suffering because of this tragic situation,” a company statement said.

Car part manufacturer Magna is suspending operations at the six plants it owns in Russia, which employs about 2,500 people. “Like most in the international community, we remain deeply concerned with the very unfortunate situation in Ukraine,” spokeswoman Tracy Fuerst told the CanadianPress. It is also making a “significant donation” to the UNHCR.

On March 2, Montreal-based footwear retailer The Aldo Group Inc. stopped shipping products to Russia, ended e-commerce and suspended support for franchisees in the country. However, according to the Globe and Mail, this hasn’t stopped franchisees from continuing to operate, much to the frustration of CEO David Bensadoun. “I’m furious about it,” he told the World.

While Canadian-American Restaurant Brands International’s Burger King has no corporate-run restaurants in Russia, the company is, much like Aldo, suspending franchisee support. Any profits from its Russian franchises will be donated to humanitarian aid for Ukrainian refugees, and the fast food chain has made a $1 million donation to the UNHCR.

Colliers, a diversified professional services and investment management company headquartered in Toronto, ended operations in Russia and Belarus on March 7. “I am appalled and saddened by the unnecessary loss of life and the displacement of millions of Ukrainians from their home. We cannot and will not stand idly by. Our decision to exit Russia and Belarus is one we make with conviction,” said Jay Hennick, global chairman and chief executive officer of Colliers, in a statement.

The company has made a significant donation to the Ukraine Crisis Appeal via the International Committee of the Red Cross and other humanitarian charities.