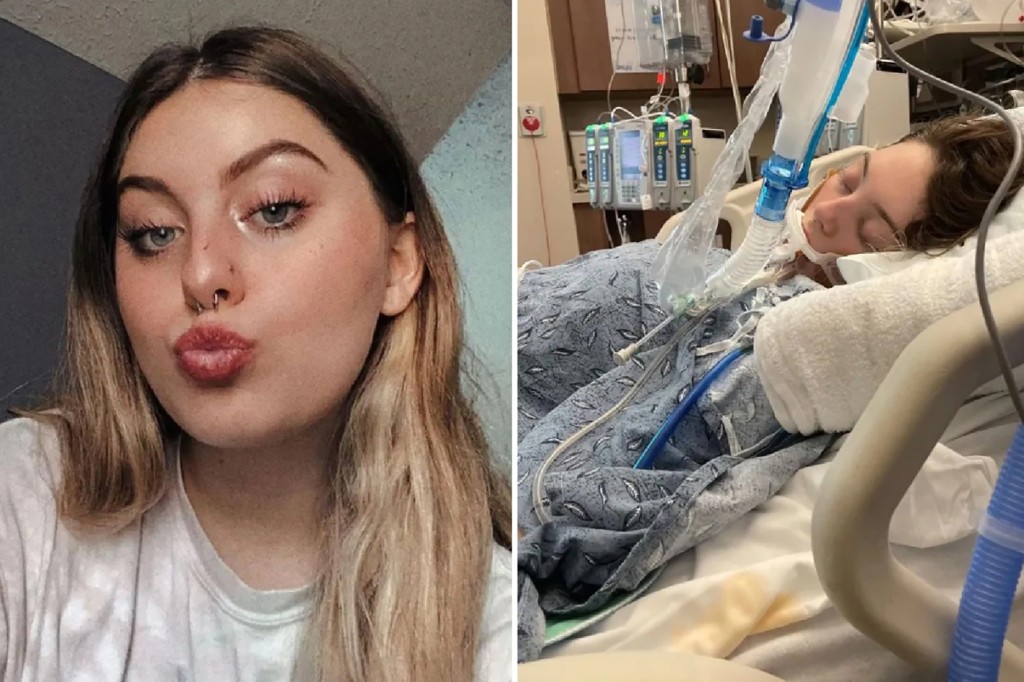 A teenager ended up on life support after waking up with what she thought was a cold.

But Juliet Roberts was actually battling lung damage and pneumonia caused by vaping since she was 14.

The 18-year-old was hospitalized in January after struggling to breathe.

She claims doctors told her years of constant vaping had ravaged her lungs and this, plus a reaction to a disposable vape, sparked pneumonia.

After being rushed to hospital Juliet ended up on life support for five days, and still needs to be on oxygen.

Now recovering at home, Juliet is still at risk of having a heart attack due to the strain on her weak lungs.

The waitress decided to share shocking photos of herself on life support to warn people of the dangers of vaping.

Juliet, from Mount Pleasant, Tennessee, US, said: “I woke up feeling like I had a cold and just really didn’t feel good, and as the days progressed I started feeling worse.

“Three days later, I was sitting in my room and I went to stand up and I fell back down because I couldn’t breathe, I thought I was going to pass out.

“I called my boyfriend and told him I needed to go to the emergency room because I could tell something was wrong.

“As soon as they checked my vitals three nurses rushed in because my oxygen was so low – they couldn’t believe I was walking.

“After getting all the testing done my condition started worsening very quickly and I don’t remember much after that.

“The doctors told me that if I hadn’t made it there that night I would’ve lost my life. It was very scary.

“They told me I was basically dying, I’m so glad I went to the hospital when I did.”

Juliet started vaping at 14 when her school friends started using them and says she quickly became “addicted”, going through a disposable e-cigarette every two weeks.

It is rare, but people – often teenagers – have ended up with severe lung damage due to vaping.

The NHS advises vapes are “far less harmful than cigarettes and can help you quit smoking for good”, but they are “not completely risk-free”.

Adding: “Almost all of the harm from smoking comes from the thousands of other chemicals in tobacco smoke, many of which are toxic.”

She told how the infection that nearly killed her made her lungs appear white on the x-ray, rather than the typical black depiction of healthy soft tissue.

Juliet said: “When you get a lung x-ray it’s supposed to be black and the only white you’re supposed to see is your ribs.

“But my x-ray you could almost not even count some of my ribs because of how white it was.

“That was because of the damage from the vape and the pneumonia which I got from vaping.”

Juliet has been told she will be out of work for between three to 12 months as her lungs recover.

She has to be careful to avoid catching any illnesses that could further strain her weak lungs.

The teen said: “Right now my lungs are working so hard that if I overdo myself I’m at risk of a heart attack – my heart rate jumps to 150 when I go up the stairs, which is very dangerous.

“My lungs will never go back to what they were before, they will just get strong enough for me to breathe on my own again.

“They told me leaving the hospital that if I even got a common cold I’d end up right back where I was because of how weak my lungs are at the minute.

“My friends had to get Covid tests to come and see me just to make sure it was safe.”

Juliet says doctors have warned her that because of the lasting damage done to her lungs, using a vape again could kill her.

After her traumatic experience the teen, who vows never to vape again, now hopes to encourage others to quit, insisting ‘it’s not worth it’.

Juliet said: “I haven’t hit one since the day I went to the hospital and I don’t plan on doing it ever again.

“The doctor told me that it would end my life and that’s all the information I need to quit for good.

“I just want people to know that it’s really not worth it. I want it to be known that it is as dangerous as people say it is and it’s a lot more common than people think it is.”

This happens when there is an imbalance between free radicals – molecules that cause damage to cells – and antioxidants – which fight free radicals.

This story originally appeared on The Sun and has been reproduced here with permission.