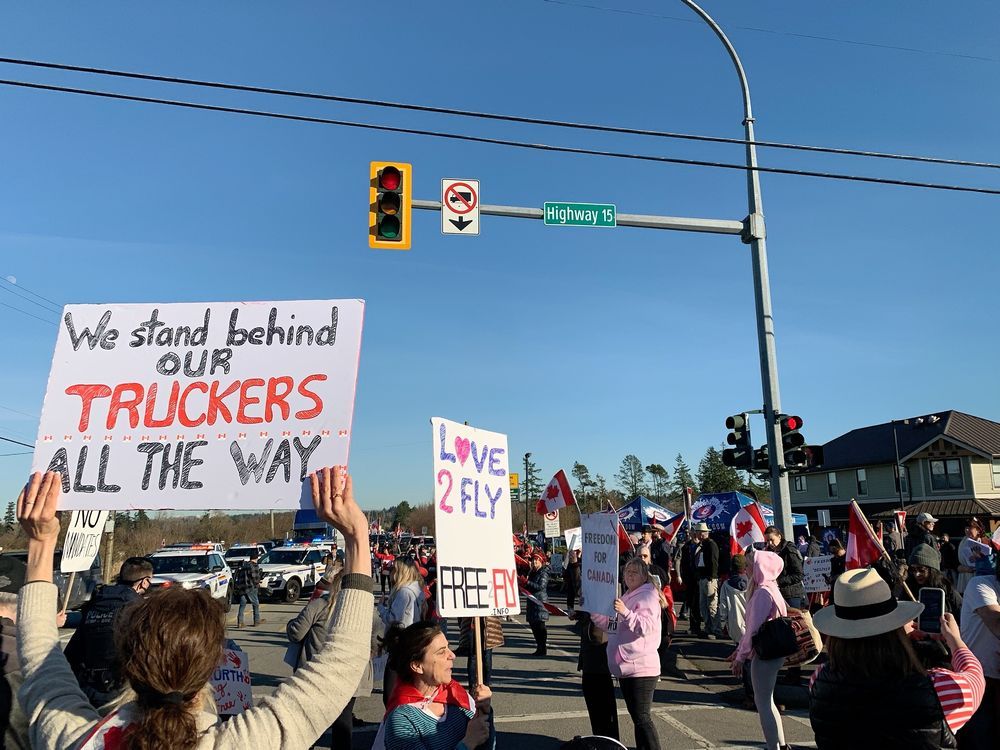 The main route to the Pacific Highway border crossing in Surrey was closed Saturday afternoon after protesters opposed to vaccine mandates and other COVID-19 measures broke through RCMP barricades and began driving the wrong way down 176th Street.

The RCMP says in a press release that the “behavior is not being tolerated” and is being investigated. No arrests were made.

There were no reported injuries, but the Surrey RCMP says the drivers could have caused harm to pedestrians and first responders.

Cpl. Vanessa Munn, a spokeswoman for the Surrey RCMP, confirmed Saturday afternoon that officers continue to monitor the situation.

She said motorists should expect significant traffic congestion in the area of ​​176th Street and 8th Avenue and are cautioned to avoid the area. 176th Street is now closed from 8th Avenue southbound.

Border crossing photos show hundreds of drivers and their supporters lining the street, part of what organizers called the third Lower Mainland Freedom Convoy, which traveled from Chilliwack to the 176th Street crossing in Surrey.

Chris Rasmussen said he came to the rally to support freedom of choice.

“When the government mandates your decisions about your health, they’ve crossed a line,” Rasmussen said. “I’ve lost $400,000 in revenue in my companies — they’re done. Let’s get on with living.”

A woman named Crystal, who didn’t want to give her last name, said the Mounties shouldn’t be blocking the convoy.

“We’ve been waiting hours and hours to see the convoy,” she said, adding that the RCMP’s blockade has had the same effect as the convoy: “At the end of the day, the border’s still blocked.”

Drumming, dance music and flags filled the air at the corner of the streets. “Freedom” was periodically sung, led by a woman with a bullhorn standing on the roof of a pickup as families with small children milled around. Chalk messages scrawled on the pavement read “freedom rules” and “media is the virus.”

Another woman named Kim said: “We want to make sure that our voices are heard. We want the mandates to be dropped. We want (Prime Minister Justin) Trudeau to step down from office — we want our freedoms back.”

A long line of transport trucks and other vehicles stretched down 8th Avenue on either side of the intersection.

The Surrey Board of Trade and the Surrey Chamber of Commerce both issued statements speaking out against the protesters’ actions.

“The impact of these blockades is choking already impacted supply chains, businesses and jobs,” the Board of Trade said in a statement. “This is an unacceptable sabotage of the economy.”

The Chamber of Commerce called for more action by governing bodies and said COVID-19 and extreme weather caused labor shortages and supply chain disruptions, and the protests are adding to the strain and preventing economic recovery.

“Allowing these illegal closures to continue will also have serious economic and reputational consequences for the years ahead,” it said.

— With files from The Canadian Press

Sign up to receive daily headline news from the Vancouver Sun, a division of Postmedia Network Inc.