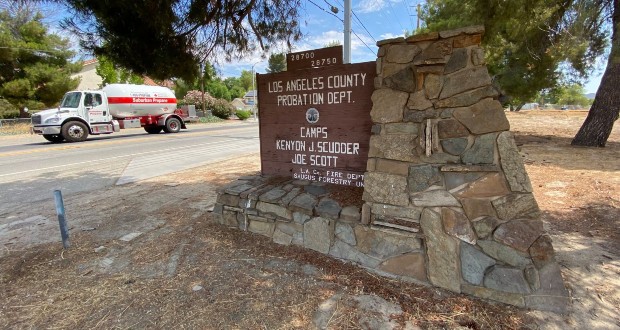 City officials and Santa Clarita residents opposed to the placement of youth offenders in Saugus at Camp Joseph Scott were echoed by Supervisor Barger at this week’s City Council special meeting.

“I want to talk about Camp Scott,” Barger said. “Who here does not believe in redemption? Who here does not recognize that we have to do what’s right? But we’re playing politics with the lives of these children. It makes absolutely no sense to do what this board is doing.”

Barger referred to the LA County Board of Supervisors’ approval of Camp Scott in Saugus as a rehabilitation center for violent juvenile offenders earlier this year, with the County’s Division of Juvenile Justice (DJJ) Subcommittee never consulting with the City of Santa Clarita.

During the City Council meeting, some residents also expressed their disagreement with the proposal, with one mentioning the vulnerability of Camp Scott with regard to seismic retrofitting.

Many City officials and residents have expressed opposition to the Camp Scott proposal, and Barger has continued to propose an alternative motion recommending housing the juveniles in Sylmar.

“Our county’s own Probation Department – ​​which is staffed by the professionals and subject matter experts who are tasked with overseeing these youth – recommended that Nidorf Juvenile Hall serve as a Secure Youth Treatment Facility,” Barger said in a previous KHTS article.

During this week’s meeting, Barger addressed the plan to reimagine Barry J. Nidorf Juvenile Hall in Sylmar as a state-of-the-art Secure Youth Treatment Facility. This plan would allow trauma-informed services, therapy and other programs to help offenders prepare for re-entry to society, according to Barger.

Barger pointed out that a DJJ Subcommittee presentation recommended four facilities to the Board of Supervisors, and that the presentation ranked Camp Scott as the least feasible selection for the proposal.

“Stay tuned tomorrow, encourage your friends and family to call in,” Barger said. “I believe [these juvenile offenders] have a right to be housed somewhere, but it’s got to be the right place that’s going to come out better than they went in.”

Two motions were notably added to the Board’s supplemental meeting agenda for Tuesday by Supervisors Sheila Kuehl and Hilda Solis, including one motion to eliminate Camps Joseph Paige and Clinton B. Afflerbaugh.

The second motion asked for a report for the Board on timelines, cost and other relevant information to close Central Juvenile Hall and transfer youth offenders to Nidorf Juvenile Hall in Sylmar.

Barger has encouraged commenters to send comments or call in to the Board of Supervisors’ meeting, slated for Tuesday, March 15.

The ‘No to Camp Scott’ campaign also asks callers and commenters to encourage Supervisors to reject the Camp Scott proposal in favor of the recommendations by Barger and the Probation Department to use Nidorf instead.

Those who wish to comment or join the ‘No to Camp Scott’ campaign are asked to click here.

Do you have a news tip? Call us at (661) 298-1220, or send an email to news@hometownstation.com. Don’t miss a thing. Get breaking KHTS Santa Clarita News Alerts delivered right to your inbox. Report a typo or error, email Corrections@hometownstation.com

KHTS FM 98.1 and AM 1220 is Santa Clarita’s only local radio station. KHTS mixes in a combination of news, traffic, sports, and features along with your favorite adult contemporary hits. Santa Clarita news and features are delivered throughout the day over our airwaves, on our website and through a variety of social media platforms. Our KHTS national award-winning daily news briefs are now read daily by 34,000+ residents. A vibrant member of the Santa Clarita community, the KHTS broadcast signal reaches all of the Santa Clarita Valley and parts of the high desert communities located in the Antelope Valley. The station streams its talk shows over the web, reaching a potentially worldwide audience. Follow @KHTSRadio on Facebook, Twitterand Instagram.