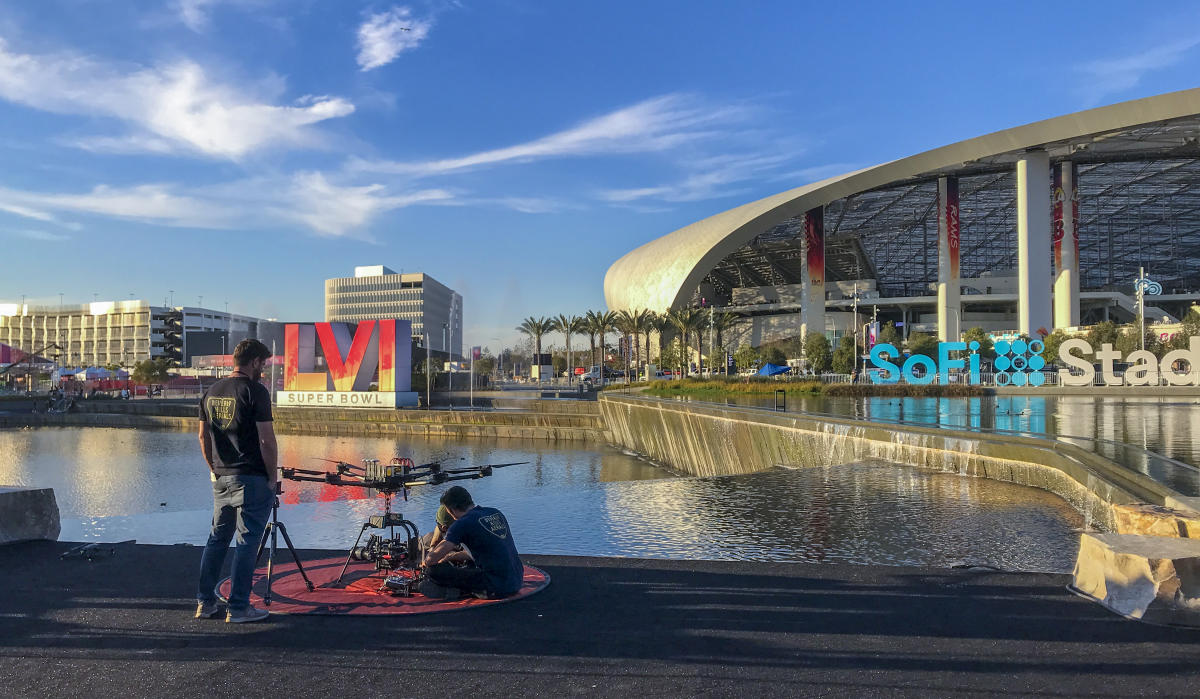 LOS ANGELES — For 21 seasons the National Football League didn’t have a team in Los Angeles, the second-largest media market in the United States.

We’re going to look back at that gap and wonder how it ever happened. The short story is that the league needed land and a stadium, and that was difficult to come by. We’ll get to that struggle in a bit.

When Super Bowl LVI kicks off, it will be a signature moment in the NFL’s new Los Angeles era. SoFi Stadium, the most expensive stadium in the world by a mile, will be the centerpiece. There was a stroke of luck when the Los Angeles Rams won the NFC championship. They’ll be the second team ever to play a Super Bowl in its home stadium, taking on the Cincinnati Bengals.

Sunday was always going to be a massive moment for the NFL in Los Angeles, and it became even bigger.

“To have the Super Bowl here for the first time in 29 years and have the home team in it, you couldn’t have scripted it better,” said Kathy Schloessman, president and CEO of the Los Angeles Sports and Entertainment Commission and a member of the Super Bowl LVI host committee. “It’s a Hollywood story.”

On Sunday, it will seem like the NFL never left Los Angeles. Yet there was collateral damage. One of the big stories of the NFC championship game was that the San Francisco 49ers had more fans at SoFi Stadium than the Rams. That’s what happens when you miss a generation of LA football fans.

“Of course damage was done,” said Hall of Fame receiver Isaac Bruce, who was a rookie on the final Rams team in LA and now hosts a Rams podcast. “The Rams winning is the regeneration part of it. They’ve put themselves in position to win and everyone loves a winner. Particularly in LA”

NFL had a long history in Los Angeles

Anyone moderately interested in sports has heard about the Brooklyn Dodgers and New York Giants moving to California in 1958. The Rams had already been in California 12 years.

There’s a long history of the NFL in Los Angeles, starting with the Rams’ move to Los Angeles from Cleveland in 1946. The Rams played in the Los Angeles Coliseum through 1979 and then they moved to nearby Anaheim. The Raiders moved from Oakland into the Coliseum in 1982.

By the end of the 1994 season, the Coliseum and Anaheim Stadium were outdated, attendance was dwindling and the teams looked for better options.

“I didn’t feel the effect of a home game until 1995 at Busch Stadium and 66,000 people were going crazy for us,” Bruce said. “We had our faithful, the melonheads, and a lot of people didn’t want us to leave. But with everything going on it affected what we saw in the stands. We’d go to road games and it would be totally different.”

The Raiders moved back to Oakland, while the Rams moved to St. Louis. When the Rams moved, the Raiders still hadn’t decided to leave. But the discussion in April 1995 was that LA wouldn’t be long without two teams, much less any team.

“We hope to be able to put together a plan to have a second team in LA,” then-NFL commissioner Paul Tagliabue said, according to the Los Angeles Times. “It could be expansion or it could be the relocation of an existing franchise.”

“I can’t imagine LA without a football team, but who would have thought two years ago the Rams would be out of LA?” Cowboys owner Jerry Jones said in 1995.

It took more than two decades to return.

Finding a stadium in Los Angeles

Eric Grubman was an NFL executive vice president from May of 2004 to July of 2018. A key part of his job was overseeing stadium construction and relocation, which meant he was a point man for the NFL’s return to Los Angeles.

Though having LA open gave teams leverage to pressure cities into giving tax money to build new stadiums, Grubman said the NFL wanted to get back into Los Angeles. The biggest obstacle was the lack of a viable stadium. Grubman said some in the NFL feared a team coming to LA before a new stadium was built because that team could have a “10-to-20-year project.”

Grubman recalled a meeting early during his time with the NFL looking into a possible stadium location in Carson, which is about 20 miles south of Los Angeles. Grubman was new to the LA project and remembers cynicism from others going to the meeting. Sure enough, Grubman reminded the real estate developer that had the land wanted “an obscene amount of money” and an inside track to owning a team. That wasn’t going to happen. Grubman said many of the subsequent meetings with different people in the LA area included aggressive demands.

“It was the first time I’d experienced it firsthand,” Grubman said. “I was perhaps naive thinking I would get this done.”

There were a few sites that got serious consideration. Carson, Hollywood Park, the Dodger Stadium area, Orange County and the City of Industry were among them. The Dodger Stadium plan, when Frank McCourt owned the Dodgers, looked promising for a while. Grubman remembered quietly touring Hollywood Park to judge its viability, and he thought an NFL stadium could go there. There were sites in which he thought a deal could be made, but for various reasons they fell through. There was also a bit of apathy from some owners about Los Angeles considering the NFL was growing at a rapid pace without having a team in that market.

“There were people in the league and owners that said, ‘Has it hurt our media rights? Has it hurt values ​​of the teams? We’re doing fine,'” Grubman said.

While working on Los Angeles, Grubman wanted to secure stadiums in Oakland, San Diego and St. Louis. He didn’t want those cities to lose their teams. Grubman said he even pitched an idea for Los Angeles to host a game of the week and he would rotate among teams, like regular-season games in London. LA could also host a Super Bowl regularly, even without a permanent home team. That idea didn’t get off the ground.

In 2014, Rams owner Stan Kroenke bought 60 acres of land in Los Angeles. That would end up being the site of SoFi Stadium.

Finally, after a long and drawn-out battle, the NFL decided that the Rams and Chargers would be in Los Angeles sharing SoFi Stadium, and the Raiders would move to Las Vegas. The Rams moved from St. Louis, and there would eventually be a $790 million settlement by the NFL to St. Louis city, county and the Regional Convention and Sports Complex Authority.

The NFL is in Los Angeles, about to host a Super Bowl, but Grubman said his strongest emotion is from not getting at least one new stadium in Oakland, St. Louis or San Diego.

“I have mixed feelings. I think it’s wonderful the league is in LA and Las Vegas and I think the projects will stand the test of time,” Grubman. “I feel terrible for the fans [in Oakland, St. Louis and San Diego].

“I know I’d feel better than I to today if we didn’t go 0-for-3 and got one or two done. It was my job to get LA opened up and get stadiums in those three cities. I only got half the job done.”

The football palace in LA

SoFi Stadium has been a popular topic this week, almost as much as the Bengals or Rams. It’s a sprawling, impressive palace. The stadium costs $5.5 billion. No other stadium in any sport cost than $1.9 billion. In addition to the Super Bowl, SoFi will host the College Football Playoff and WrestleMania next year, as well as the opening and closing ceremonies of the 2028 Summer Olympics, and is vying to be one of the host sites for the 2026 FIFA men’s World Cup .

“Anyone we take over there is blown away,” Schloessman said. “You just walk in the door and people are wowed.”

“I think you can see $5 billion being spent on it,” Bruce said.

The ingredients are in place for the NFL market to grow again in Los Angeles. The Rams are a winning team, with two Super Bowl trips over the past four seasons. The Chargers have some exciting players. Stars sell in LA and each team has them.

However, it will take time. There were many lost seasons.

“My first game running out of the tunnel against the Indianapolis Colts, I was excited about our football team, but running out of the tunnel I thought to myself like, what in the crap did I sign up for leaving Cincinnati?” said offensive tackle Andrew Whitworth, who has spent the past five seasons with the Rams. “I was kind of blown away by how few people there were.

“It was trusting that if we win, we create a great culture, we create a place people are proud to come watch and believe in, fans will show up. And that’s been the case. It has continued to grow. Everywhere I go, there’s Rams stuff.”

Even if the Rams win on Sunday, it doesn’t fix everything. There are plenty of football fans in Los Angeles, but anyone whose formative years with the sport were from 1995-2015 might have picked the 49ers, Dallas Cowboys, Pittsburgh Steelers or some other random team to root for. You can’t make up that gap, even with a Super Bowl parade.

“There was some lost time, but it can be made up,” Schloessman said. “Whatever damage is done can quickly be made up having two exciting teams.”

Kevin Demoff, the Rams’ chief operating officer, said this playoff run could be laying a foundation for the future of the NFL in Los Angeles, at least with the Rams’ fanbase. He admitted that the Rams probably won’t flip the fans who grew up without a home team and attached themselves to another franchise.

“What it’s about is their kids, who are 8, 9, 10 years old growing up wearing Cooper Kupp jerseys, wearing Aaron Donald jerseys and becoming lifelong Rams fans,” Demoff said. “That’s what these two weeks are truly about.”