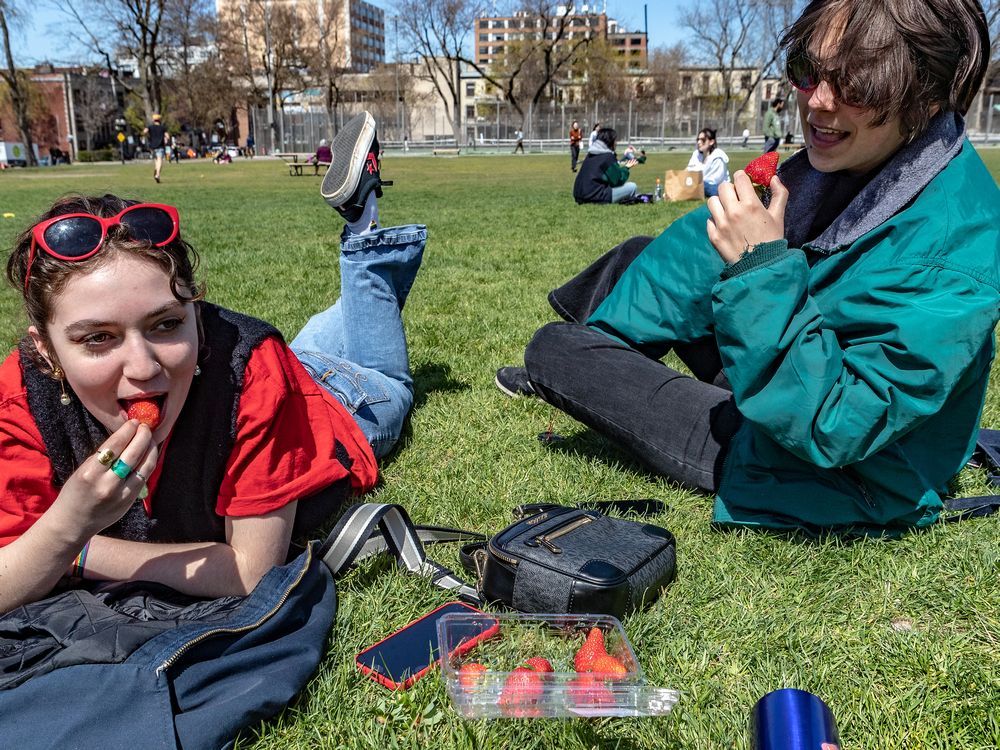 Most of the time, Jeanne-Mance Park is filled with people doing their best to maintain Montreal’s famous joie de vivre. Add some much-needed sunshine after what felt like weeks of gray skies, and Parc du Plateau-Mont-Royal was even busier than usual on Friday, with Montrealers and those in warmer countries taking advantage of the rays, we reminding that there is more to life than the 9 to 5 job.

“It’s my first summer here and I’m really happy that the winter is over,” said Clélia Aubigny, who comes from Paris. “I don’t want to see any more snow. I’m a little fed up.

“It feels so good. We’re here with strawberries and books.

It was 12°C and sunny mid-afternoon on Friday, and the forecast calls for sunshine all through next week. By Thursday, it should be 25°C.

“We expect temperatures to increase daily throughout the next week,” said Jean-Philippe Bégin, meteorologist with Environment Canada. “But let’s keep in mind that we are late to have our first 20 diplomas, at least for Montreal. This usually happens on average around April 17, and we didn’t have any 20 degree (days) yet. We are expecting him on Tuesday. So it’s almost three weeks late.

Many felt April was colder than usual, but Bégin points out that temperatures were average for the month — it’s just that there were fewer temperature extremes. Last month’s average was 6.3 C, and normally it’s 6.4.

“It’s too hot for me,” said Manon Morin, who was hanging out on the grass with Aubigny on Friday. Like Aubigny, Morin comes from France. “What about the real summer, in July or August? It’s too hot. I wish it was May all year.

Quenten Lettner was lying on the grass reading a novel, his shoes by his side.

“It’s perfect. I love this weather,” he said. “It’s cold at night, but the day is good. Winter is really sad. is perfect for that.

Ramy Beydoun arrived in Quebec from Lebanon last August, so he already had a taste of the Montreal summer.

“I’ve been waiting for summer all winter,” says Beydoun, lying in the park, his head resting on the saddle of his bike. “I’ve only had two months of summer, so just enough to feel like it when you’re in the winter conditions. So as soon as the sun came out, I was there too.

“Winter wasn’t as bad as I expected because I was mentally prepared. People only talk about the weather and how harsh the winter is. But honestly, when you find your crew and you stay inside, it will pass.

Gerardo Sanchez, who came here from Mexico, said he likes the change of seasons in Quebec.

“It changes the way you perceive life,” Sanchez said. “Of course, the winter is difficult. But it allows you to rethink the process of your life. It forces you to miss little things here and there. You are no longer allowed to keep doing everything all the time, especially on very difficult days. You really have to find a different way of doing things. You have to give up certain things, like going to the park, for example.

“When you live in a place like where I’m from, everything (in time) is stable, so you always think things are going to be the same. But if you suddenly get limitations, then you say: “OK, that won’t happen. Go with it.” That’s life.

“In a way, it also brings a lot more joy, because the change allows it – you sit down and say, ‘OK, I can go out and have as little clothes as possible. ”