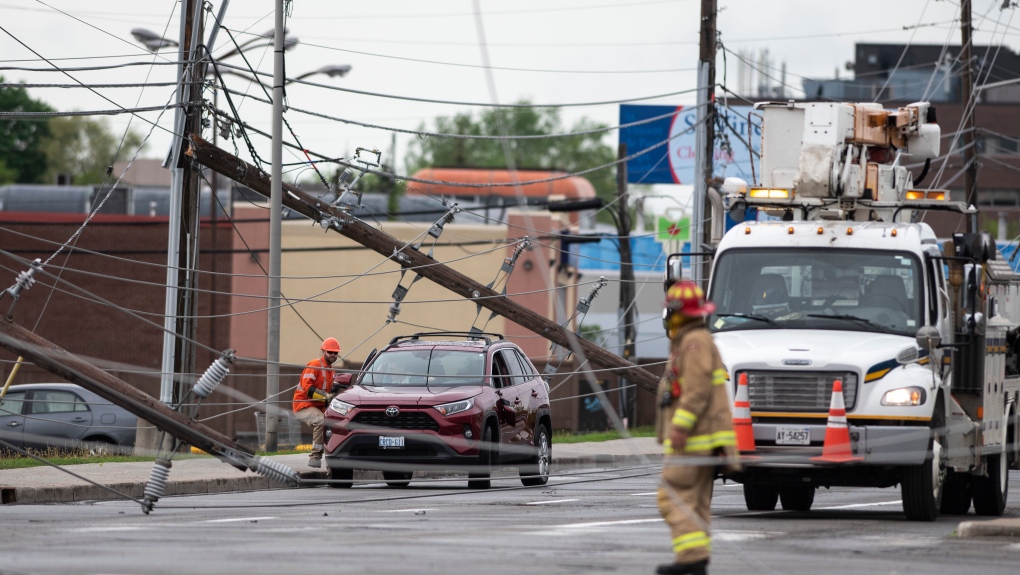 The storm that swept through Ontario and Quebec on Saturday is known as the “derecho,” a powerful, long-lasting, far-reaching windstorm.

The derecho storm that swept through southern Ontario and Quebec before moving into Maine left a path of destruction in its wake and claimed at least eight lives, including three in eastern Ontario.

Environment Canada senior climatologist David Phillips explains that a derecho is not a common term.

“It’s not a word we use very often because they don’t happen that often,” he told Newstalk 580 CFRA’s “CFRA Live with Andrew Pinsent” on Sunday. “It’s kind of like a microburst or a thunderstorm, but you get a whole army of them. Imagine soldiers lined up and mowing down the front lines as they advance. Meteorologically, that is essentially what is happening.

The storm moved into Canada from Michigan around 11 a.m. Saturday, hitting London, Ont., Kitchener-Waterloo, Toronto, Kingston and Ottawa, before moving up into Quebec and then Maine.

“This storm extended nearly 1,000 kilometers from Michigan to Maine as it moved through Ontario and Quebec. That’s what a derecho is, it’s a long string of very active thunderstorms or microburst type situations. Nothing can dissuade him. It just works,” Phillips said.

Phillips said a derecho often has tornado-type or even hurricane-force winds. Ottawa experienced wind gusts of up to 120 km/h and other locations experienced even stronger winds.

But tornadoes, which are rotational storms, can still fit into the generally straight line of a derecho.

“There could be tornadoes embedded in this kind of derecho. I haven’t heard of a tornado report, but that doesn’t mean it can’t produce it,” he explained.

Phillips says May can be a fickle month when it comes to weather.

“You have this combination of warm and humid air that is possible,” he said, noting that the storm moved in when it was 30 degrees with a Humidex of 38 on Saturday. “There’s always that possibility of warm air in May, but cold air in May is never too far away.”

“You can get air mass thunderstorms in July, but what you get in May is this combination of warm air opposing cold air. In the spring, that’s why you can having severe weather,” Phillips said.

“When you get this kind of atmosphere changing into another, it’s usually heralded by wild weather, and it was.”