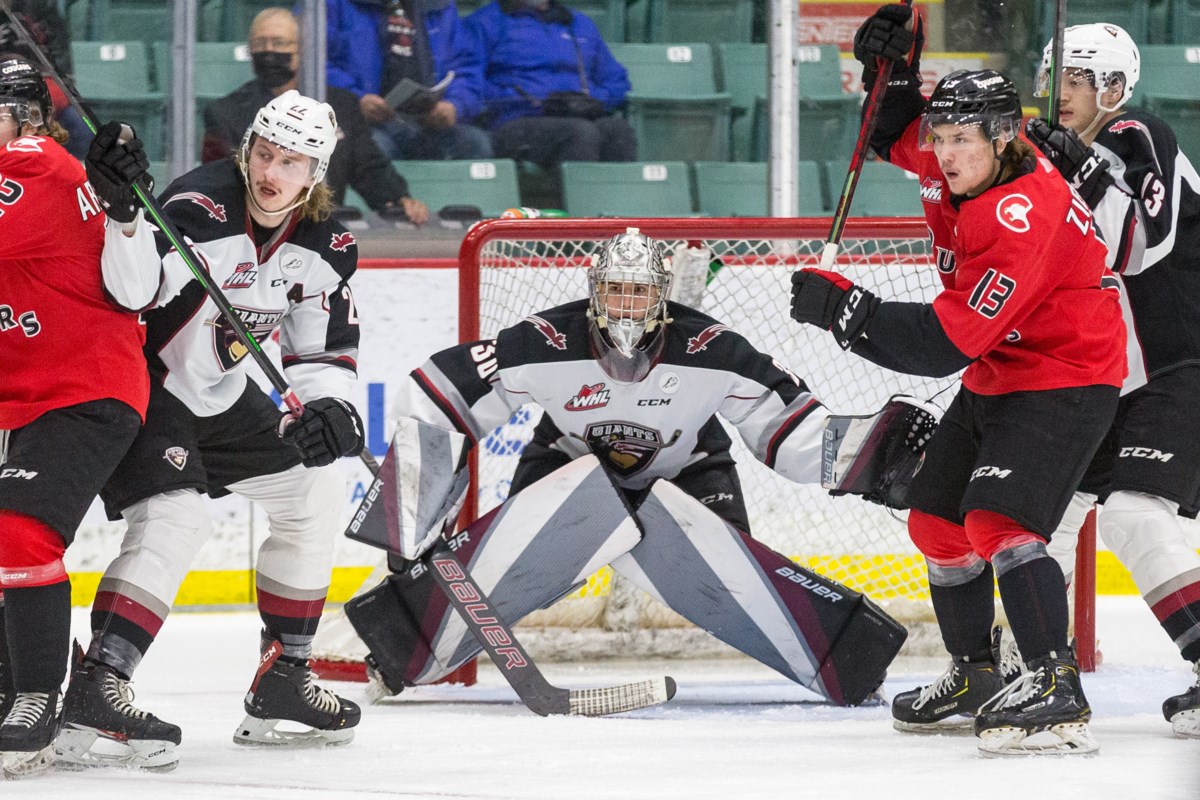 The Prince George Cougars arrived at the rink Saturday expecting a much-improved effort with a vastly different outcome than the fate they were dealt Friday by the Vancouver Giants.

Instead, the Giants played a perfect road game that was a virtual carbon-copy of what Cougar fans witnessed the previous night at CN Centre.

A 3-1 Vancouver win moved the Giants within a point of their WHL BC Division rivals in the Western Hockey League standings. Now having lost eight of their last nine games, the Cats’ goal-scoring woes continued, much to the disappointment of their fans in the crowd of 2,051.

Just like they did Friday night in their 4-1 win over the Cougars, the Giants lit the light first, on a power play. After a scoreless first period, with Cougars defenseman Bauer Dumanski serving a delay of game penalty, Boston Bruins first-rounder Fabian Lysell connected on a cross-ice feed from Payton Mount for a shot from the face-of circle that found the net three minutes int the second period.

The Cougars had a couple of great chances, both off rebounds given up by Swedish goalie Jesper Vikman, but couldn’t capitalize. Carter MacAdams whiffed on one of them, failing to corral a loose puck while facing a gaping net, and Carlin Dezainde nailed the base of the post with a wrist shot, producing a fat ricochet that escaped the reach of Cougars sticks.

Late in the period, Lysell took exception to face wash from the gloved hand of Ryker Singer and slashed the Cougars winger in retaliation. But instead of taking advantage of their first power play of the game, the Cats coughed up a shorthanded goal, only the second they’ve allowed all season. Defenseman Evan Toth forced a turnover off a face-off and Mount took off with the puck unmolested down the right wing and fired a shot through Tyler Brennan five-hole for a 2-0 lead.

There were no reports of garbage cans getting dented by a coach’s boot in between the second and third periods but Cougar head coach Mark Lamb’s anger at that point over giving up what turned out the winning goal would have been justified.

“We had one extra guy out there and they had a 2-on-1, over a battle in the face-off circle, they just got outworked,” said Lamb. “That’s how you lose hockey games, getting outworked. Our team usually works pretty hard but we’re not thinking the right way right now. We had no chemistry.”

The Cougars’ offensive struggles continued in the third period and they were held to just three shots in the first half of the period. A Prince George power play late in the game gave the Cats a chance, with 3:21 left on the clock, but it backfired when pointman Ethan Samson’s stick shattered as he tried to let go a shot, allowing Ty Thorpe to break free with the puck to score his third goal of the weekend into an empty net – another shorthanded goal for the Giants.

The Cougars wrecked Vikman’s chance for a third WHL shutout in the final minute, just like they did Friday night. Keaton Dowhaniuk’s shot rang off the post and bounced out for Caden Brown, who backhanded in the rebound while falling, with 32 seconds left.

Vikman made 24 saves and was picked as the first star of the game for the second-straight night. He certainly overshadowed Brennan, who could be faulted for allowing Mount’s shot to slip through his legs.

Special teams also heavily favored the Giants and the Cougars will try to work out the bugs in practice over the next few days.

Losing four points to the Giants (18-23-2-0) didn’t sit well with Cougars’ center Connor Bowie, who played his 200th career WHL game Saturday and had his parents from Fort St. John watching the team try to shake itself out of its worst slump of the season.

“I think we’re just going through one of those times right now, a lot of teams got through them during the season, and ours just happens to be right now at a tough time of the year,” said Bowie. “It just comes down to keeping it simple and getting shots to the net and they’ll start to go in.

“This was a big weekend for us, we had it circled for the last couple weeks, especially against a divisional rival the last couple years but we let it slip away. Any time you get scored on in a power play, I think it kind of shows how it went tonight. Eventually it will turn around and we’ll get things going.”

The Cougars (18-25-2-1) have now gone 10 straight games scoring two goals or less and have earned just three of a possible 20 points over that stretch.

“You won’t win any games if you’re not scoring goals and we’re not doing enough to score,” said Lamb. “We’re right in these games and they just out-grit us and get to the net and score goals and we stay to the outside.

“It doesn’t matter who we’re playing, we’ve got to work our way out of it.”

Lamb reminded his troops of their insufficient effort at critical times in the game Saturday won’t be tolerated and ordered an intense post-game weightroom session as punishment. The Cougars were also told to show up at the rink for an on-ice workout Sunday morning that might involve more than a few stops and starts controlled by the coach’s whistle.

They’ll have a couple days to practice before they leave for their next game Wednesday in Kelowna. The Rockets will be the Cougars’ opponents again Friday and Saturday at CN Centre.

Shots on goal by