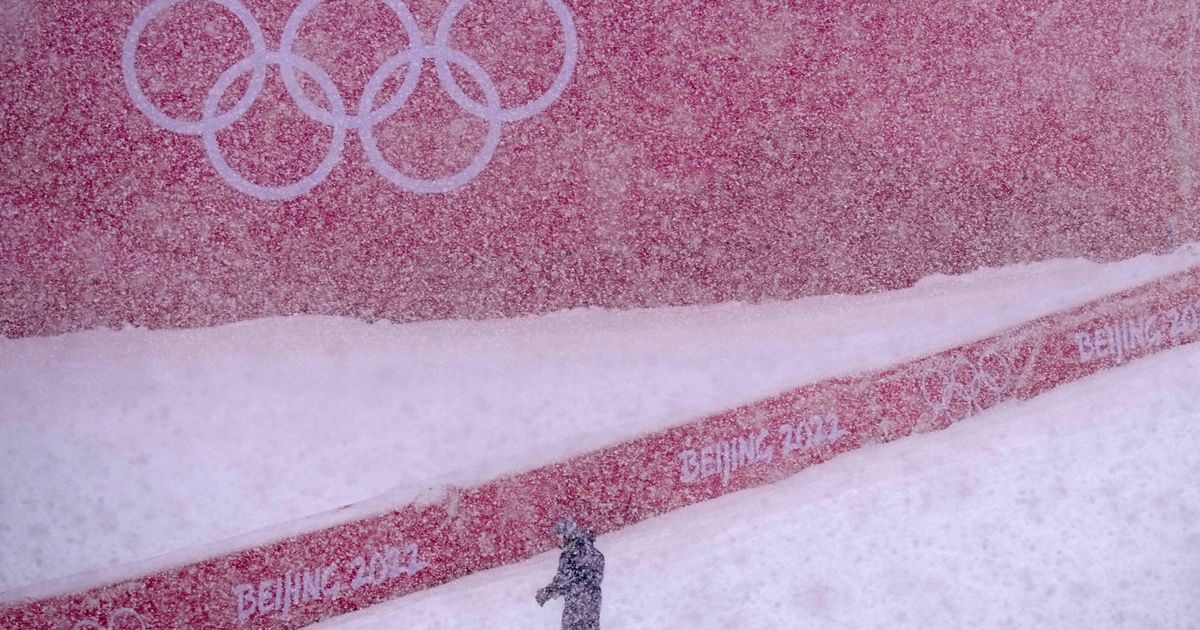 Real snow fell in Beijing on Sunday for the first time since the Olympics began, giving the city the appearance and feel of a real Winter Games. There was fresh snow in the mountains as well, where all events have been contested on artificial snow.

While the snow was mostly a welcome sight, up in the mountains it affected visibility and made it tougher for ski racers to make it down the hill, especially in the first run of the two-leg giant slalom.

Marco Odermatt of Switzerland handled the snow and poor visibility better than anyone else and won his first Olympic gold medal.

“I really risked everything in the second run because I wanted not just the medal, I wanted the gold medal,” Odermatt said. ”It’s difficult because you can lose everything but today it paid off.”

While a light snow fell Saturday, it came down a lot harder on Sunday, the first time it snowed during an Alpine race during the Beijing Olympics. The heavy snow forced the second run to be postponed by 1 hour, 15 minutes. During the delay, workers cleared snow from the course with snow blowers and shovels.

“It was a hard day, with the conditions, with such a long wait between the two runs,” Odermatt said. “It was more than five hours for me, it was such a long time to re-think everything and it was hard to stay focused. I tried to sleep some minutes in between.

“I actually never dreamed about it but now it still feels like a dream.”

Many other skiers had a rough day on the course known as The Ice River at the Yanqing Alpine Skiing Center.

“It’s a shame what the weather is like. I was hoping for the sun, like on all the other days. Couldn’t see anything,” said Luca from Aliprandini of Italy, who was sixth after the first run but skied off course and didn’t finish the second run. “When I was going down, the flakes were big.”

“It’s great conditions on the course, but you can’t see it,” Ford said.

“It was difficult for everyone,” said Henrik Kristoffersen of Norway, who was eighth overall.

The snow affected the men’s cross-country relay ski race so much that workers used leaf blowers to clear it out of the tracks. The snow made the ski tracks slow, especially on the first two classic ski legs.

Just like in the women’s race, the Russian team opened a lead on the first leg and then held on for the gold medal. Sergey Ustiugov maintained more than a minute lead on the last lap over the two-man chasing group of Johannes Hoesflot Klaebo of Norway and Maurice Manificat of France.

Ustiugov grabbed a flag on his way to the finish line and won the 10-kilometer relay 1 hour, 54 minutes, 50.7 seconds. By comparison, the winning time in the four-man relay at the 2018 Pyeongchang Olympics was more than 20 minutes quicker.

Freestyle skier Eileen Gu has to wait a day to try to win a second gold medal at the Beijing Games after gusty wind and snow postponed the qualifying round for women’s slopestyle.

Qualifying was pushed back to Monday and the final to Tuesday. The switch avoids putting the gold-medal round directly against the Super Bowl, which is also being televised by NBC.

The men’s slopestyle qualification also was switched from Monday to Tuesday, with its final now set for Wednesday.

The 18-old-year Gu was at the top of the hill stretching and getting ready for some warmup runs in the blustery conditions when qualifying was postponed. The snow was blowing sideways and the flags on the bottom of the course were whipping in all directions. Visibility also was low, which makes landing jumps off the massive kickers along the course dangerous.

Gu was born and raised in the United States but chose to compete for China, her mother’s home country. Her victory in big air last Tuesday was hugely popular in China.

Russian figure skater Kamila Valieva continued to practice in the hours before the Court of Arbitration for Sport was to decide whether she will be allowed to compete this week. An expedited hearing was scheduled for Sunday, with a ruling expected sometime Monday.

A decision by CAS is expected roughly 24 hours before the 15-year-old Valieva is due on the ice at Capital Indoor Stadium for the short program on Tuesday. The overwhelming favorite, she drew the 26th starting spot Sunday among the 30 in the event.

Valieva has yet to miss a scheduled practice since a drug test taken in December was flagged last Monday for traces of a banned heart medication. That was the same day the reigning European champion helped the Russian skaters win team gold with a dynamic free skate in which she became the first woman to land a quad in Olympic competition.

On several occasions since then, the stress appeared to have gotten to Valieva, including a moment during Saturday’s practice session when she fell during a triple axel and eventually skated to the boards and tearfully hugged her embattled coach, Eteri Tutberidze.

Marte Olsbu Roeiseland held her focus in the blowing snow and shot cleanly in the last standing stop to win the women’s biathlon 10-kilometer pursuit race. It was her third gold medal of the Beijing Olympics and fourth medal overall.

The Norwegian started the race with a lead because of her win in the sprint race and hit 19 of her 20 targets. She won in 34 minutes, 46.9 seconds.