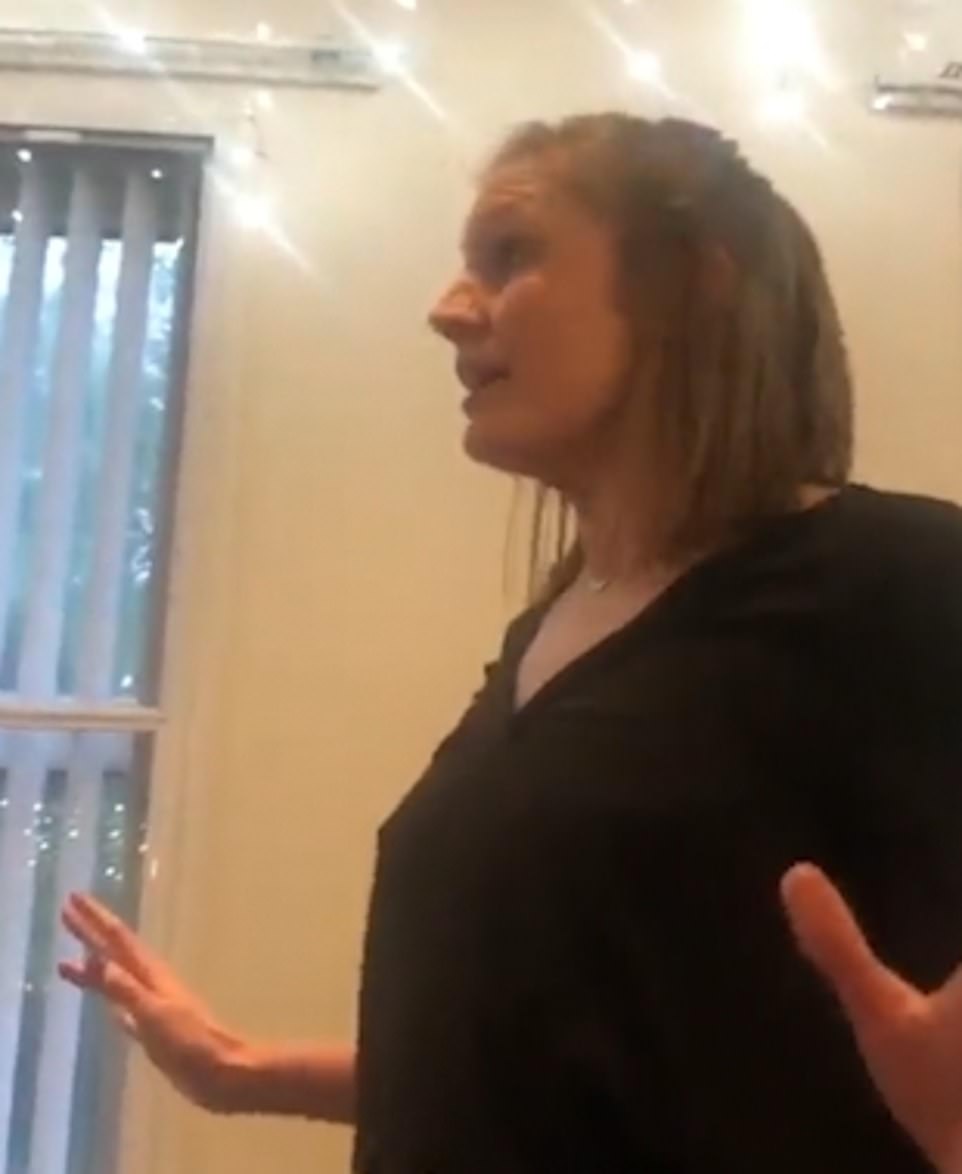 This is the moment Priti Patel was ambushed by a group of eco-protesters over her migration policy in Rwanda as she gave a speech at a Conservative dinner party on Friday night.

A video shared by campaign group Green New Deal Rising shows several protesters suddenly rising up one by one to deliver a message to the Home Secretary.

In the clip, Ms Patel dons a pink dress as she approaches the podium at the Bassetlaw Conservatives Spring Dinner.

The minister manages to say, “Good evening everyone, I just want to start…”, before a protester posing as a guest at the £40 a head event suddenly rises from her chair.

She shouts towards the stage: “Priti Patel, your racist policy kills people.

“Your plans to send asylum seekers to Rwanda are inhumane, they are inhumane and will ruin people’s lives.”

The protester is then escorted away by security, but another woman rises from her chair and continues the protest, saying the young people are “disgusted” by the controversial immigration policy.

As she walks out, another protester stands up and calls the policy “cruel”, before they all start chanting, “Out, out, out!” 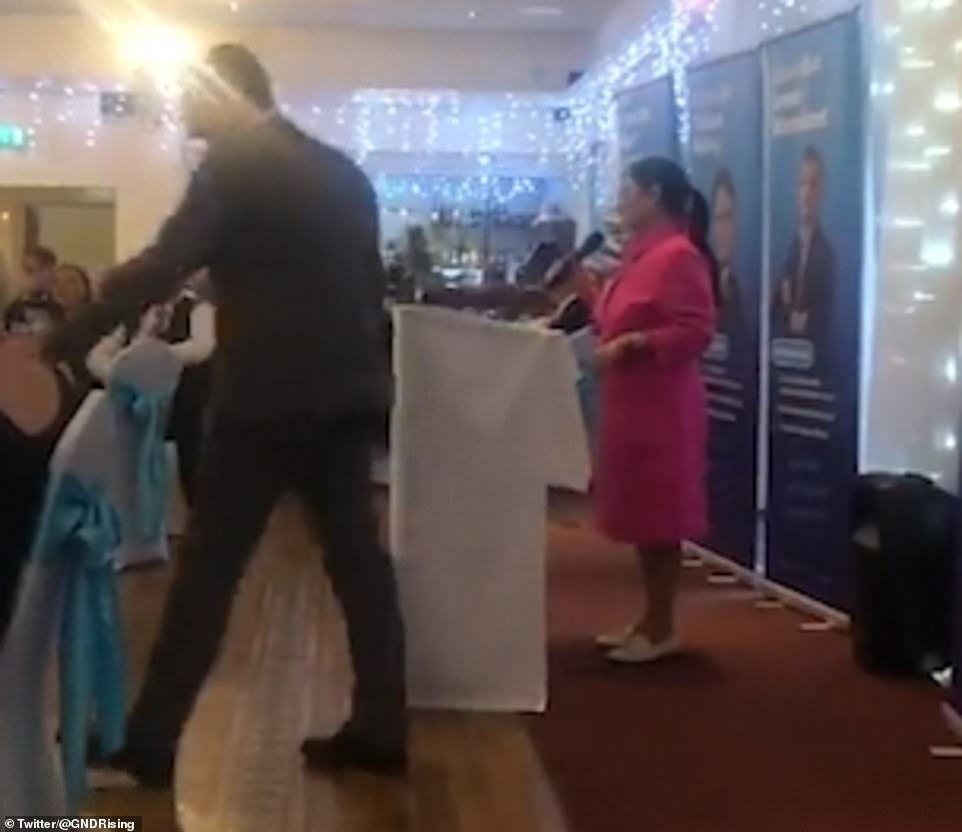 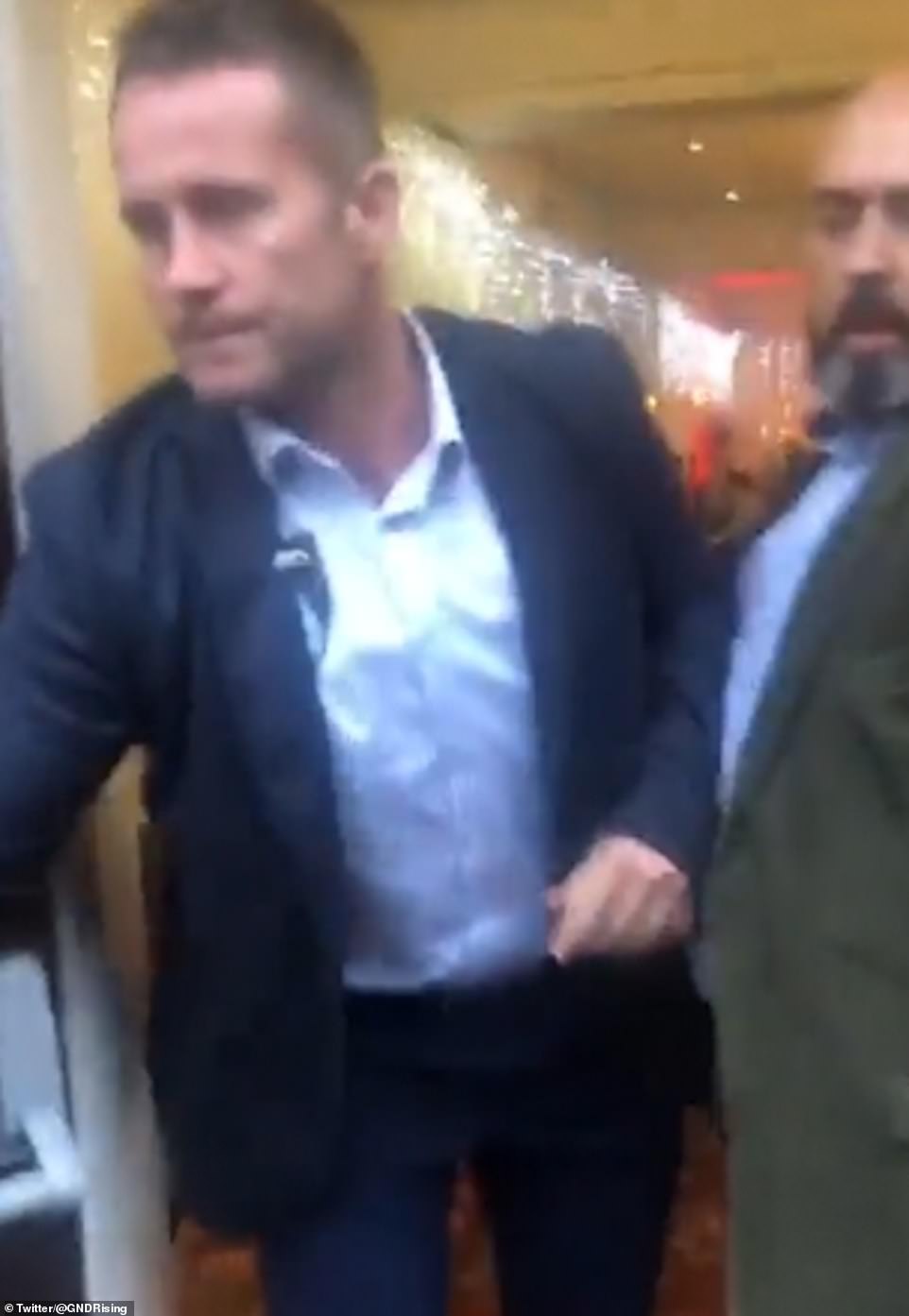 Pictured: Security is seen leading protesters out of the Tory £40 a head dinner last night

Another man and another woman then rise from their chairs, shouting that the policy is “racist and problematic” and “inhumane”.

We then hear the whole group shouting: “Say it loud, say it clearly, refugees are welcome here!”

The group tweeted the video today, saying, “Last night we disrupted @pritipatel because his #Rwandaplan is cruel, morally bankrupt and it will cost lives.

“We demand that the government abandon this widely condemned policy and provide support to people seeking safety.

“No matter where we come from, we all deserve dignity and respect.”

They added: “We are sickened to see the government stepping up its hostile policies rather than helping those fleeing war, poverty and extreme weather.”

“As climate change displaces entire communities, leaving people vulnerable to exploitation and violence, we MUST act with compassion.

“And as a country with a long history of exploitation of people and resources, the UK must recognize its responsibility. 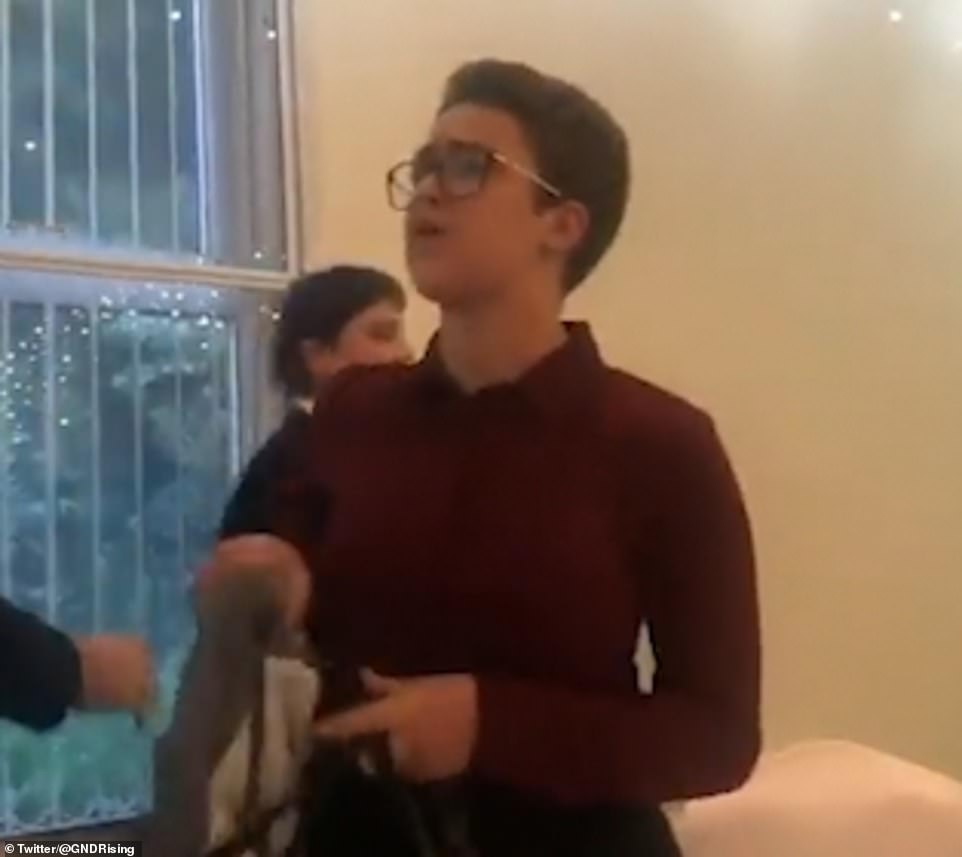 As a second protester walks out, another stands up and calls the politics “cruel”, before beginning to chant, “Out, out, out!” » 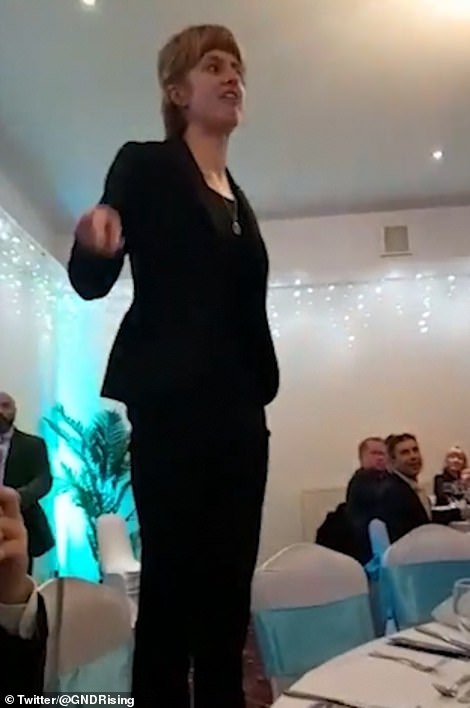 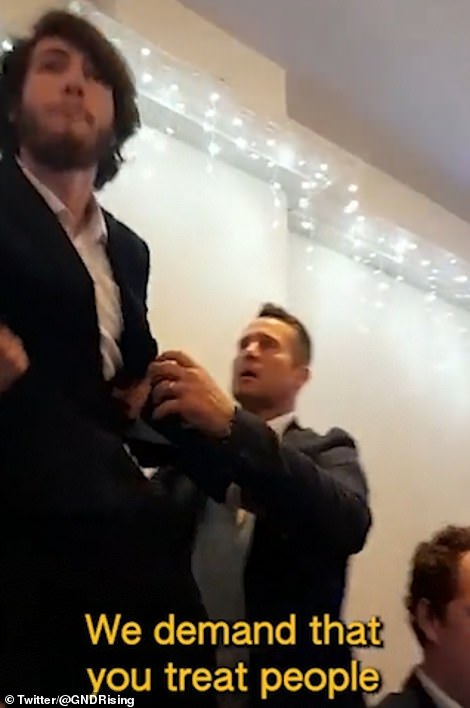 Another man and another woman rise from their chairs shouting that the politics are “racist and problematic” and “inhuman”.

“We call on the government to provide an accessible and decent system for people seeking refuge, drastically reduce emissions and pay its dues!” #GreenNewDeal’.

The activist group quickly received support from former Green Party leader Caroline Lucas, who welcomed the disruption and said the group had shown “the moral leadership that is so tragically absent from this government”.

A Home Office spokesperson said: “The Global Migration Partnership will overhaul our broken asylum system, which is currently costing the UK taxpayer £1.5billion a year – the most bred for two decades.”

“This means that those who arrive dangerously, illegally or unnecessarily can be relocated to have their asylum claims considered and, if recognized as refugees, build their lives there.

“Our new migration and economic development partnership with Rwanda is fully in line with international and national law.”

Last night’s protest came after it was reported that Ms Patel’s new plan to send failed asylum seekers to Rwanda will begin next week.

The first migrants to be sent to the central African country will be single men and are expected to be notified by Home Office lawyers in the coming days, according to The Sun.

However, the flagship plan may not start for months in the face of lawsuits from human rights groups.

A Home Office source told the newspaper: ‘The first removals will be next week so people will be notified.

Home Secretary’s team ready for legal challenges as Boris Johnson hits out at ‘liberal lawyers’ for delaying his plan to send thousands of UK migrants to Rwanda – and vowed to “do it”.

The government had wanted flights to Kigali to start at the end of May as part of the £120m deal it struck with the Kagame government last month.

Under the partnership agreement, people arriving in the UK, including crossing the Channel in small boats, will be flown 4,000 miles to East Africa if they are deemed to have traveled illegally for economic reasons rather than asylum. 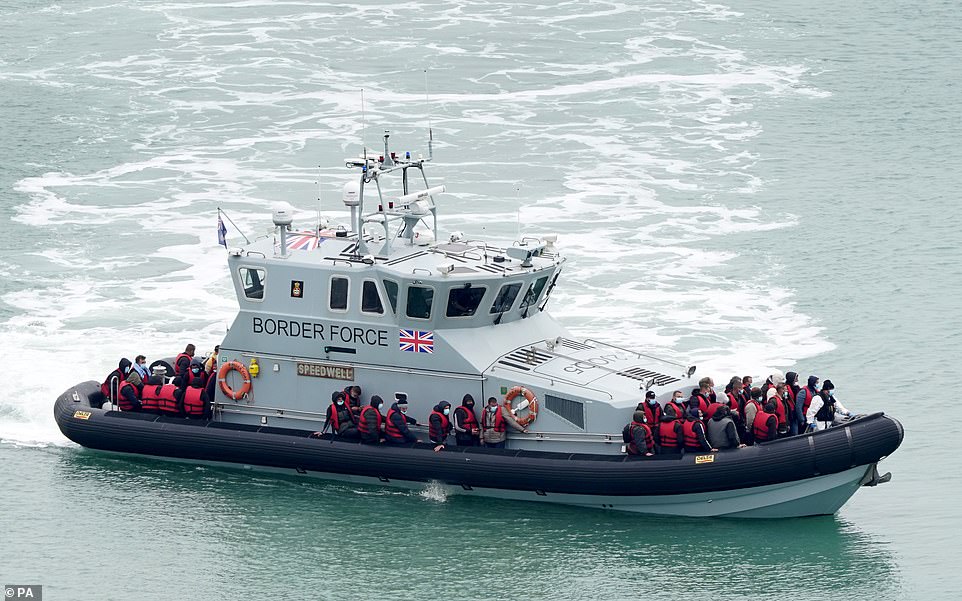 It comes as analysis of government figures shows 7,240 people have reached the UK after sailing busy shipping lanes from France in small boats in the past four months alone since the start of 2022. Pictured: Migrants arriving in the UK last week 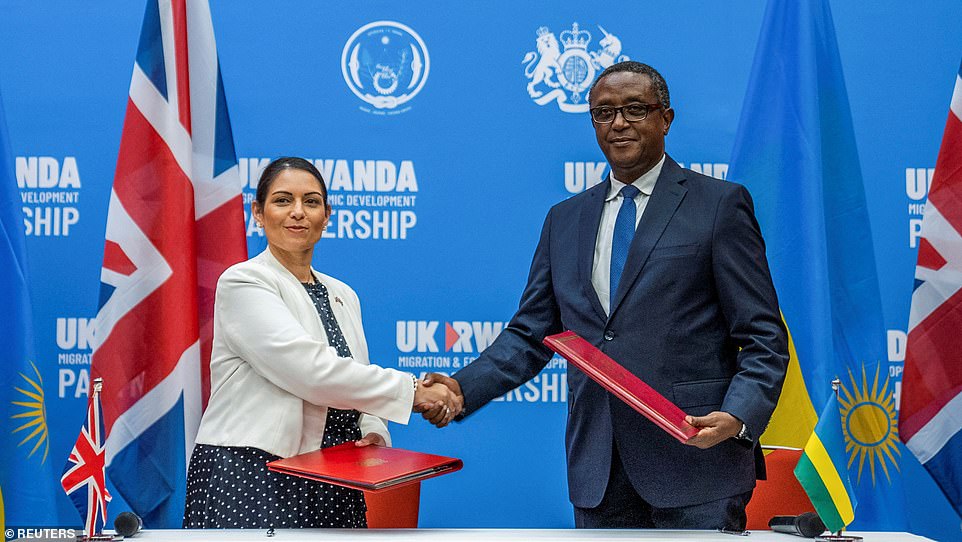 But No10 said he could not set a deadline for the start of the program. Last week, two asylum seekers who came to Britain on the back of lorries this year asked lawyers to challenge the policy.

It comes as analysis of government figures shows 7,240 people have reached the UK after sailing busy shipping lanes from France in small boats in the past four months alone since the start of 2022 .

They have nearly 700 people who crossed last week in favorable weather conditions.

Critics said the 11-day break was simply due to bad weather and insisted the home secretary’s Rwandan policy would have no deterrent effect on those seeking to join Britain .

Anxious Border Force officials have now suggested that further delays to the Rwandan scheme will only encourage migrants to attempt the dangerous journey, warning that the Channel crisis could “get worse before it gets better”.

The Ministry of Defense took control of migrant operations in April, when the government also announced controversial plans to send some of those making the cross-Channel journey to Rwanda.