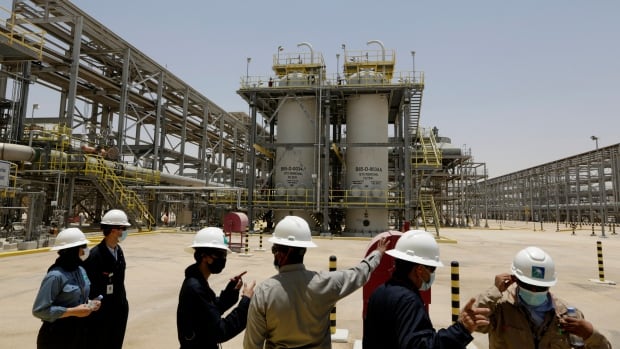 Saudi Arabia said Sunday it will transfer four per cent of the stock in the state-run oil giant Aramco to a sovereign wealth fund, an infusion valued at nearly $80 billion US as the kingdom tries to overhaul its energy-dependent economy.

The announcement on the state-run Saudi Press Agency comes as the oil firm is valued at just under $2 trillion US and as oil trades above $90 US a barrel — its highest level since 2014.

Saudi Crown Prince Mohammed bin Salman, the assertive son of King Salman, made the decision to transfer the stock, the state media report said. It will go to the Public Investment Fund, the kingdom’s sovereign wealth fund, which has been Prince Mohammed’s vehicle to invest in everything from Uber to British soccer team Newcastle United. The fund is also part of the prince’s Neom project along the Red Sea coast.

“His Highness added that the transfer of these shares is part of the kingdom’s long-term strategy aimed at supporting the restructuring of the national economy,” the report said. That will include creating private-sector jobs in the kingdom, it added.

Pivot away from oil

Saudi Arabia has reaped the benefits of a spike in oil prices after the coronavirus pandemic crashed prices at one point into negative territory, but it also sees the growing worldwide concern over climate change being fueled by burning fossil fuels. Prince Mohammed’s plans hope to see that oil wealth pay to create jobs for the kingdom’s youth to pivot away from oil over time.

The kingdom remains the largest shareholder in the firm with some 94% of the company. The Saudi Arabian Oil Co. long has served as both the main economic engine in the kingdom and the main source of funds for its ruling Al Saud royal family.

Saudi Arabia offered a sliver of shares of the oil firm on Riyadh’s Tadawul stock market in 2019. That listing made Aramco one of the world’s most-valued companies alongside Apple and Microsoft.