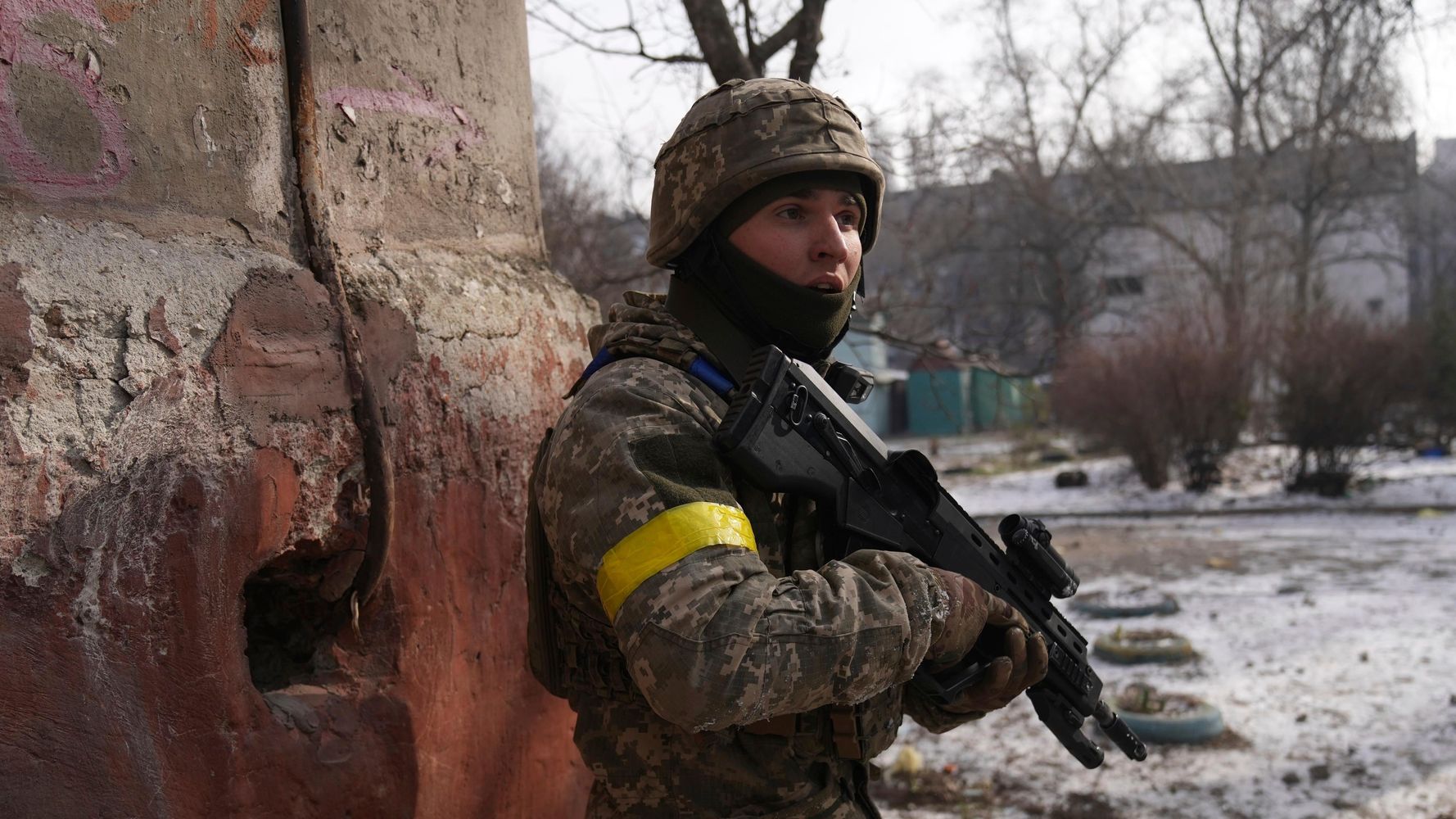 More than 30 Russian cruise missiles targeted the sprawling training facility that is less than 25 kilometers (15 miles) from the closest border point with Poland, according to the governor of Ukraine’s western Lviv region. Poland is a key location for routing Western military aid to Ukraine.

Since Russia invaded Ukraine, Lviv had largely been spared the scale of destruction unfolding further east and become a destination for residents escaping bombarded cities and for many of the nearly 2.6 million refugees who have fled the country.

It has also hosted international NATO drills. As such, the site symbolizes what has long been a Russian complaint: That the NATO alliance of 30 member countries is moving ever closer to Russia’s borders. Russian has demanded that Ukraine drop its ambitions to join NATO.

Lviv governor Maksym Kozytskyi said most of the missiles fired Sunday “were shot down because the air defense system worked.” The ones that got through killed at least 35 people and wounded 134, he said.

Russian fighters also fired at the airport in the western city of Ivano-Frankivsk, 250 kilometers (155 miles) from Ukraine’s border with Slovakia and Hungary, an attack the city’s mayor said was intended “to sow panic and fear.” The airport, which includes a military airfield as well as a runway for civilian flights, also was targeted Friday.

Fighting also raged in multiple areas of the country overnight. Ukrainian authorities said Russian airstrikes on a monastery and a children’s resort in the eastern Donetsk region hit spots where monks and refugees were sheltering, wounding 32 people.

Another airstrike hit a westward-bound train evacuating people from the east, killing one person and injuring another, Donetsk’s chief regional administrator said.

To the north, in the city of Chernihiv, one person was killed and another injured in a Russian airstrike that destroyed a residential block, emergency services said.

Around the capital, Kyiv, a major political and strategic target for the invasion, fighting also intensified, with overnight shelling in the northwestern suburbs and a missile strike Sunday that destroyed a warehouse to the east. Chief regional administrator Oleksiy Kuleba said Russian forces appeared to try to blockade and paralyze the capital with day and night shelling of the suburbs.

Kuleba said Russian agents were operating in the capital and its suburbs, marking out possible future targets. He vowed that any all-out assault would meet stiff resistance, saying: “We’re getting ready to defend Kyiv, and we’re prepared to fight for ourselves.”

Talks aimed at reaching a cease-fire again failed Saturday, and the US announced plans to provide another $200 million to Ukraine for weapons. Russian Deputy Foreign Minister Sergei Ryabkov warned other nations that sending equipment to bolster Ukraine’s military was “an action that makes those convoys legitimate targets.”

Ukrainian President Volodymyr Zelenskyy accused Russia of trying to break his country apart, as well as starting “a new stage of terror” with the alleged detention of a mayor from a city west of Mariupol.

“Ukraine will stand this test. We need time and strength to break the war machine that has come to our land,” Zelenskyy said during his nightly address to the nation Saturday.

Russian soldiers pillaged a humanitarian convoy that was trying to reach the battered and encircled port city of Mariupol, where more than 1,500 people have died, a Ukrainian official said. Ukraine’s military said Russian forces captured Mariupol’s eastern outskirts, tightening their siege of the strategic port. Taking Mariupol and other ports on the Azov Sea could allow Russia to establish a land corridor to Crimea, which it seized from Ukraine in 2014.

An Associated Press journalist in Mariupol witnessed tanks firing on a nine-story apartment building and was with a group of hospital workers who came under sniper fire on Friday. A worker shot in the hip survived, but conditions in the hospital were deteriorating: Electricity was reserved for operating tables, and people with nowhere else to go lined the hallways.

In Irpin, a suburb about 12 miles (20 kilometers) northwest of central Kyiv, bodies lay out in the open Saturday on streets and in a park.

Zelenskyy encouraged his people to keep up their resistance.

“We do not have the right to let up our defense, no matter how difficult it may be,” he said. Later Saturday, Zelenskyy reported that 1,300 Ukrainian soldiers had died since the Russian invasion began Feb. 24.

The first major city to fall, earlier this month, was Kherson, a vital Black Sea port of 290,000 residents. Zelenskyy said Saturday that Russians were using blackmail and bribery in an attempt to force local officials to form a “pseudo-republic” in the southern Kherson region, much like those in Donetsk and Luhansk, two eastern regions where pro-Russian separatists began fighting Ukrainian forces in 2014. One of the pretexts Russia used to invade was that it had to protect the separatist regions.

Zelenskyy again deplored NATO’s refusal to declare a no-fly zone over Ukraine and said Ukraine has sought ways to procure air defense assets, though he didn’t elaborate. US President Joe Biden announced another $200 million in aid to Ukraine, with an additional $13 billion included in a bill that has passed the House and should pass the Senate within days. NATO has said that imposing a no-fly zone could lead to a wider war with Russia.

The Ukrainian president also accused Russia of detaining the mayor of Melitopol, a city 192 kilometers (119 miles) west of Mariupol. The Ukrainian leader called on Russian forces to heed calls from demonstrators in the occupied city for the mayor’s release.

Moscow has said it would establish humanitarian corridors out of conflict zones, but Ukrainian officials have accused Russia of disrupting those paths and firing on civilians. Russian forces have hit at least two dozen hospitals and medical facilities, according to the World Health Organization.

Ukrainian Deputy Prime Minister Iryna Vereshchuk said just nine of 14 agreed-upon corridors were open on Saturday, and that about 13,000 people had used them to evacuate around the country.

French and German leaders spoke Saturday with Russian President Vladimir Putin in a failed attempt to reach a cease-fire. According to the Kremlin, Putin laid out terms for ending the war. For ending hostilities, Moscow has demanded that Ukraine drop its bid to join NATO and adopt a neutral status; acknowledge the Russian sovereignty over Crimea, which it annexed from Ukraine in 2014; recognize the independence of separatist regions in the country’s east; and agree to demilitarize.

Thousands of soldiers on both sides are believed to have been killed along with many civilians, including at least 79 Ukrainian children, its government says. At least 2.5 million people have fled the country, according to the United Nations refugee agency.

One is Elena Yurchuk, a nurse from the northern city of Chernihiv. She was in a Romanian train station Saturday with her teenage son, Nikita, unsure whether their home was still standing.

“We have nowhere to go back to,” said Yurchuk, 44, a widow who hopes to find work in Germany. “Nothing left.”

Associated Press journalist Mstyslav Chernov in Mariupol and other reporters around the world contributed.

Follow the AP’s coverage of the Ukraine crisis at https://apnews.com/hub/russia-ukraine