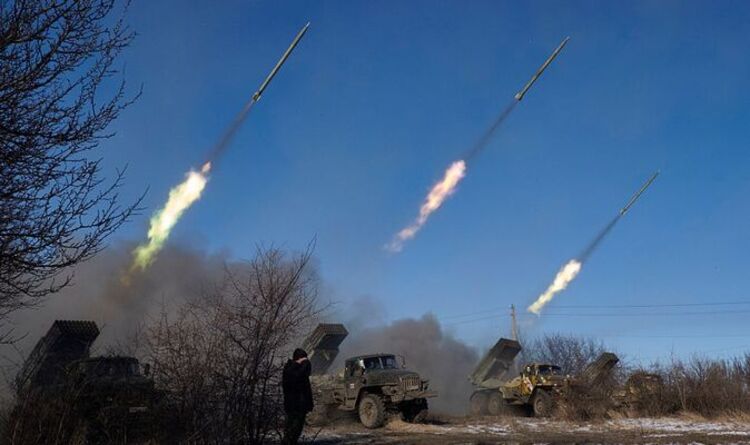 Sunday saw the first Russian attacks in Ukraine close to the border of a NATO country. Russian forces fired missiles at a military base in western Ukraine, located just six miles from the border with Poland. Officials said at least nine people were killed and 57 wounded at the International Peacekeeping and Security Center military base in Yaroriv.

Maksym Kozytskyy, the area’s governor, told Reuters that 30 missiles were fired at the complex.

Mark Austin, a Sky News presenter, warned that the world was a “tiny miscalculation” away from a major global war.

He tweeted: “Good morning, Russian bombing of western Ukraine is now rattling windows across the border in Poland…a NATO country.

“We are now a tiny miscalculation away from a much broader war here.

“That is the reality of the horror Putin is unleashing on Ukraine for no reason.”

TV presenter Andrew Neil said: “Dangerous expansion of war in Ukraine today when Russian fighter jets, in possibly largest air attack of war so far, fired over 30 cruise missiles at a military base near the Polish border where foreign fighters are being trained. At least nine killed, 57 wounded.”

Ukraine’s President, Volodymr Zelensky, has repeatedly called on NATO to implement no-fly zones over the country.

Western leaders have refused to commit to such an undertaking, arguing that it could lead to a catastrophic escalation of the war.

However, the Polish President said that any use of chemical weapons by Moscow in Ukraine could lead NATO to rethink its position.

Andrzej Duda told the BBC’s Sophie Raworth on Sunday: “If he (Putin) uses weapons of mass destruction, this would be a gamechanger in the whole thing.

“For sure, [NATO]… would have to sit at the table and they will really have to think seriously what to do, because then it starts to be dangerous, not only for Europe…, but the whole world.”

The Kremlin has made unsubstantiated claims that Ukraine is planning to use chemical weapons in the current conflict.

On Friday, Russia called a special emergency meeting at the UN Security Council to discuss its claims Ukraine plans to develop biological weapons.

Both the US and Ukraine have dismissed the allegations as a “false-flag”.

Western officials fear Russia is trying to concoct an excuse to use its chemical weapons against Ukrainian cities.

It comes as Russia’s Deputy Minister of Foreign Affairs warned Washington that Moscow would attack western shipments of weapons to Ukraine.

NATO countries have pledged millions of dollars of military aid to Kyiv in their fight against the Russian invaders.

Sergey Rybakov told Canal de TV: “We have warned the United States that the delivery of weapons from different countries is not only a dangerous move, it is an act that makes the respective convoy a legitimate target.”

Russian forces continue to meet fierce resistance from Ukrainian fighters and are making little headway in their campaign.

The Institute for the Study of War (ISW)said in their latest analysis that Russian troops had secured “limited advances” east of Kyiv and north of Crimea on March 12.

They noted that Russian forces are facing sustained Ukrainian counterattacks and mounting casualties.