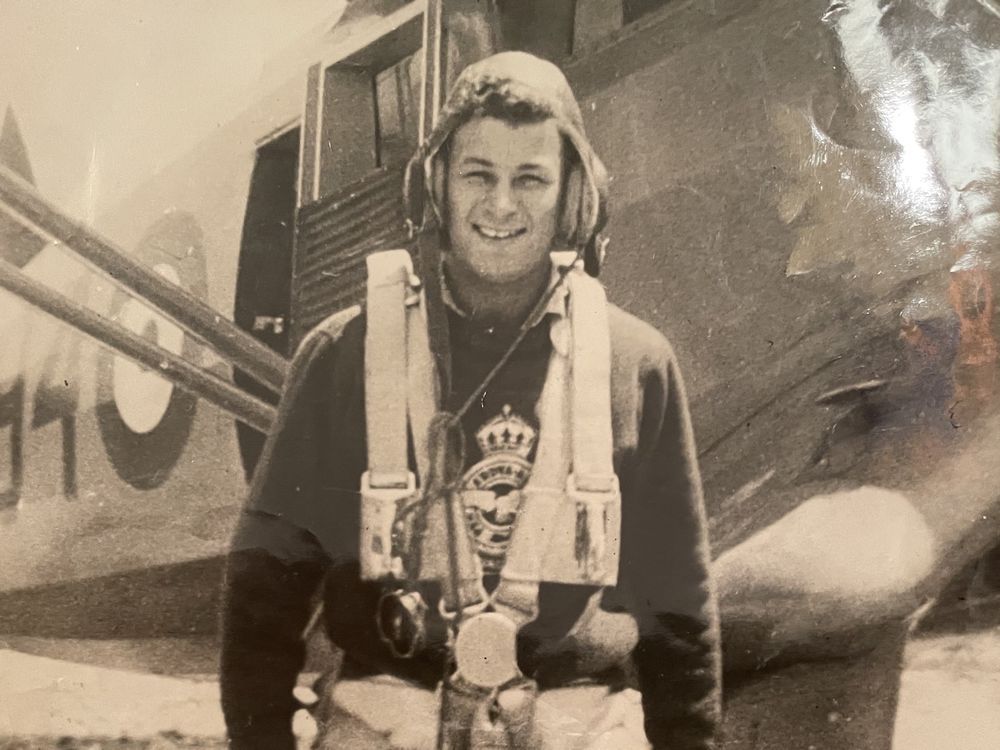 For decades, Harvey Engelberg searched for a way to honor the Canadian pilot and the French farmers who saved his father’s life.

He traveled to France 30 years ago to find descendants of the Duhamel family who took in his father after his plane crashed during the D-Day invasion of 1944. Their bravery cost them a son.

He scoured war records for relatives of Air Force Officer Harvey Edgar Jones, who died in the crash landing, but nothing was found.

It was a heavy burden on Engelberg, a Montreal businessman, now 69.

Then, on March 7 of this year, a handwritten letter arrived at his home in Dollard-des-Ormeaux. It was from Thérèse Férey, owner of the farm where her father’s plane crashed 78 years ago.

“We found pieces of the wreckage,” she wrote. “Would you like them? »

Less than a month later, Engelberg was on a flight to France.

As the world prepares to commemorate VE Day Sunday, marking the end of World War II, Engelberg did so by sharing the stories of the unsung men and women who gave him life.

Cobby Engelberg was a 24-year-old air gunner and wireless communications officer with the Royal Canadian Air Force (RCAF), flying a Dakota KG 356 that took off from England in the early hours of June 6 1944.

His plane was one of hundreds in Operation Tonga, a forward team organized by the UK’s Royal Air Force (RAF) to drop paratroopers and ordnance behind enemy lines in the hours before the launch by the forces of their offensive at dawn on D-Day on the Normandy coast. . The paratroopers’ job was to bomb German bridges and artillery batteries to hamper the Nazis’ ability to mount a counter-offensive.

“They were among the most distant, technically, traveling the farthest in France,” said historian Alex Fitzgerald-Black, executive director of the Juno Beach Center Association in Canada. “It was a great honor, because in theory it was one of the most difficult tasks.”

Engelberg’s plane was piloted by Harvey Edgar Jones, a 26-year-old man from near Niagara Falls, Ont., with a bachelor’s degree in commerce and a new fiancée. Jones and Engelberg had done many missions together.

Arriving at low altitude at 600 feet, the aircraft was hit by anti-aircraft munitions and burst into flames. Jones ordered the 22 British paratroopers to jump, along with the navigator and the plane’s second pilot, but refused parachute offers. With Engelberg knocked out, Jones attempted to land in a field at Basseneville, about five miles inland.

“Harvey had to make a choice. Put on the parachute and jump and my dad dies, or try to land,” Harvey Engelberg said.

Jones was killed instantly on impact.

The villagers found Engelberg under one of the plane’s wings. The plane was burning so hot that the ammunition inside exploded as they took it away. He was treated at the Duhamel farm for five days before an Allied unit recovered him. He woke up in England 10 days after the crash with a fractured skull and no memory of the previous two weeks.

He spent six months in England and another 18 months in Canada to rehabilitate. Golden Gloves boxing champion at 17, he was never the same after the war, it was said.

He wrote letters to the Duhamels to thank them and find out what had happened.

The day after she left the farm, Nazi forces arrived at the door, writes Ms. Duhamel in English, in elegant cursive script. They arrested family members. Her 16-year-old son was executed in retaliation for the family’s aid to Engelberg and several other Allied soldiers.

The family buried Jones on their farm and cared for his grave. He was reinterred years later at the Commonwealth War Graves Commission Cemetery in nearby Ranville.

Harvey Engelberg visited his grave a few years ago to pay his respects. He also had headstones placed for Jones and his father at the RCA Memorial Museum in Trenton, Ontario.

Thérèse and Ghyslaine Férey took over the Duhamel farm 45 years ago. Over the past few years, as Ghyslaine worked the ground, pieces of metal began to surface. Their 90-year-old neighbour, who remembered the crash, told them that was where the plane had crashed. Thérèse began research, but a misspelling of Cobby Engelberg’s name prevented her from finding her family. She kept trying.

“We are the last witnesses of the Second World War,” she said in an interview with the France 3 Normandie television channel. “My husband’s grandfather went through the First World War and he didn’t talk about it. He was there, but there was an absence. We have suffered from unsaid things.

“In a way, with Harvey Engelberg, we are righting an injustice. It’s terrible that Jones was buried neither seen nor known, anonymously. The loneliness of the combatant is terrible.

Three generations of the Férey family were waiting to welcome Engelberg when he arrived on April 3. Forty-two remains of his father’s airplane were laid out on the dining room table. A television news crew was there, organized by Engelberg and Fitzgerald-Black.

An emotional Engelberg told the Férey family that they too were unsung heroes.

Engelberg chose to donate the pieces along with his father’s logbooks and other memorabilia to the Juno Beach Center museum located near Courseulles-sur-Mer, where they will be displayed. The center receives 100,000 visitors a year. Engelberg kept only his father’s military dog ​​tags.

Jones’ Squadron Leader had recommended him for the prestigious Victoria Cross, but this was refused by England’s Air Ministry on the grounds that many other pilots had made similar sacrifices.

“It may have been one of the greatest acts of bravery on D-Day, but hardly anyone knows it,” Fitzgerald-Black said. Engelberg and the Fereys right that wrong, he said.

“Harvey Engelberg’s father and the pilot who saved his life were volunteers, like the young people involved in Ukraine today,” she said.

In the muddy field where the plane crashed, Engelberg said a Kaddish prayer for the dead in Hebrew, his voice choking with emotion. Thérèse Férey said a prayer for her family.

Cobby Engelberg went on to have three children, seven grandchildren and 15 great-grandchildren, Harvey told them.

“The Duhamel family and this driver have created a whole Engelberg family. Now we are over 25 descendants,” he said. “And no one knows them.”

“I told them I would do anything to get this story told, because this story should be told.”