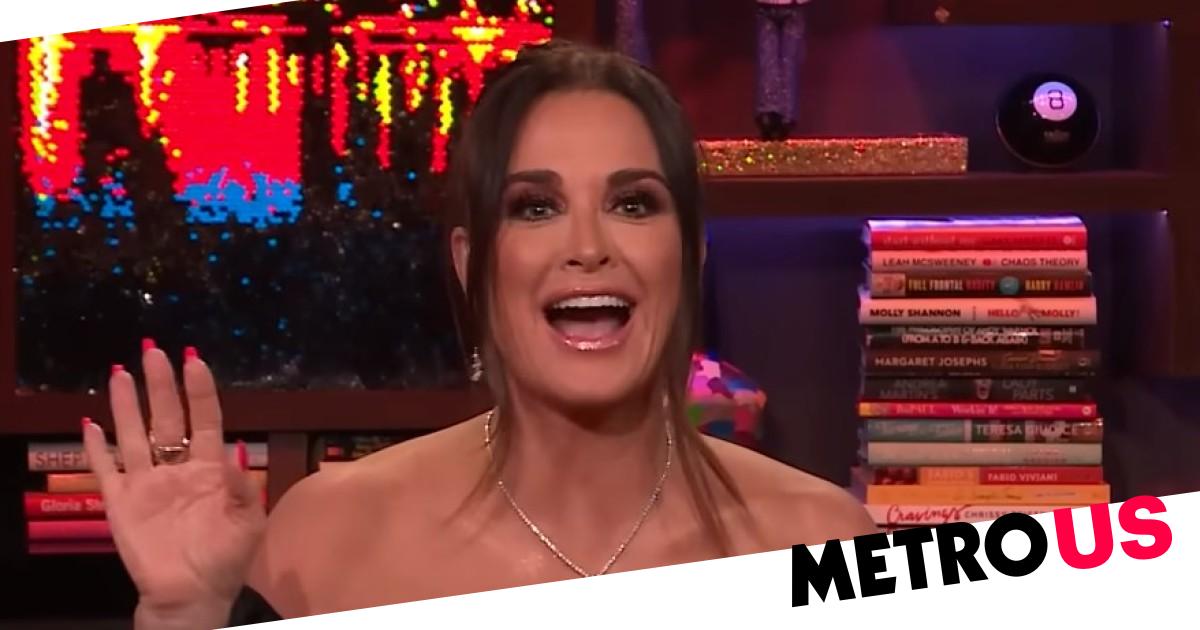 Kyle Richards suffered an awkward moment when Andy Cohen accidentally spilled the beans during his operation.

The Real Housewives of Beverly Hills star appeared on the latest episode of Watch What Happens Live on Wednesday, alongside SNL star Chloe Fineman.

However, the 53-year-old probably wasn’t expecting talk to turn to her recent going under the knife, when it was revealed she had undergone breast reduction surgery.

“How’s the breast reduction going?” the presenter asked, to which the baffled RHOBH veteran replied, “Oh, thanks for letting everyone know, Andy. Thanks.”

The WWHL live host was mortified by the mistake, insisting he thought she had spoken about it publicly.

When she said she didn’t talk about it, he continued, “But you told me so much about it!

‘I am really sorry!’

As the live audience clapped and applauded the scenes, Chloe took the moment to chime in, “She told me in confidence!”

“You could tell me you killed someone and I swear I’ll take it to my grave. But I can’t keep a secret about myself.

“I had breast reduction surgery. I have never had implants. I had double Ds, no implants. I still don’t have an implant but I walked in and said ‘I want smaller breasts and I never want to wear a bra again in my life’ and here I am!

“So I have smaller breasts although you can’t really tell because they’re still puffy, but I’ll never wear a bra again!”

When Andy praised the new look, she continued, “I’ve never lied about anything I’ve done and never will, just so you know.

“You think I did my face, I did that, I really didn’t. I’ll tell you everything. I had a breast reduction three weeks ago.

Andy ended the segment by apologizing once again, to which Kyle added, “It’s okay, Andy. I love you.’

The Bravo star recently made headlines when she teased that her time on our screens might be coming to an end soon.

She started the Beverly Hills franchise in 2010 with her sister Kim Richards and former best friend Lisa Vanderpump, but suggested she might be ready to retire from the Real Housewives life.

In a new interview, the Halloween actress was asked about her return to the fold after the end of season 12, which is currently playing on our screens.

“I always say, ‘I don’t know,’ and every season I think, ‘Well, maybe I can do one more,'” she told E! News. New. ‘Sometimes I’m just like, ‘How can I keep doing this? especially when I’m really upset, like this last season we finished.

“I was like, ‘There’s absolutely no way. I’m finished. I’m done. I want to live my life in peace. I can’t stand this.

“Then the meeting comes and I’m like, no, I’m really done. Goodbye, done and done.

You have a story?

If you have a celebrity story, video or photos, contact the Metro.co.uk entertainment team by emailing us at celebtips@metro.co.uk, calling 020 3615 2145 or by visiting our Submit Stuff page – we’d love to hear from you.

MORE: Emmerdale spoilers: Marlon fears Rhona will marry him out of pity – but makes a decision