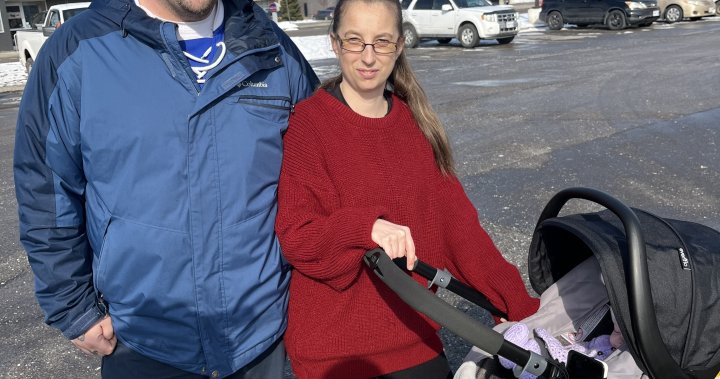 An Oshawa-area couple, along with their three-month-old daughter say the high cost of rent has left them no choice but to call the Motel 6 in Whitby their home.

“You go from having your apartment, having your life, and slowly over the course of three years it just goes down. It’s hard. Hard to deal with,” said Craig St. Denis, the father.

“There’s a lot of inflation across the country … What I’d like to see happen is an Ontario-wide rent cap. An apartment that I’ve lived in just six years ago, and that same apartment is going for $1,400 a month right now,” explains St. Denis.

The motel room they’ve been staying in for over two months was provided through an Oshawa shelter program that offers temporary, emergency housing.

“It’s been tough … everything is compacted,” said mother, Debbbie Clancey.

A report by Rentals.ca shows the cost of a one bedroom apartment in Oshawa has gone up by nearly 21% year over year, the highest jump in 35 cities across Canada.

“I imagine it’s going to remain incredibly high. I am concerned for renters because it’ll become aggressively high more than likely,” said Anita Bongers-Lewis, a broker with RE/MAX Jazz.

“We continue to see huge growth into Oshawa region, even during the pandemic. Oshawa has stayed a top five immigration city for the past five years,” explains Anita Bongers.

The Executive Director of Cornerstone — a shelter in Oshawa — says there will soon be many people with full time jobs becoming unhoused.

“You try not to despair, but you see that people are in a very difficult spot and you really can’t help them, there’s not much you can do. because bricks and mortars aren’t magically going to appear, and not on the scale you’re going to need it,” said Executive Director Robert Brglez.

Vernon, BC families living in motels due to lack of housing

The provincial government recently invested $11.5 million toward housing supports in Durham. This program aims to simplify and streamline operations and get people into housing faster.

The small family says they’ve experienced long waitlists and hope to be housed as soon as possible.