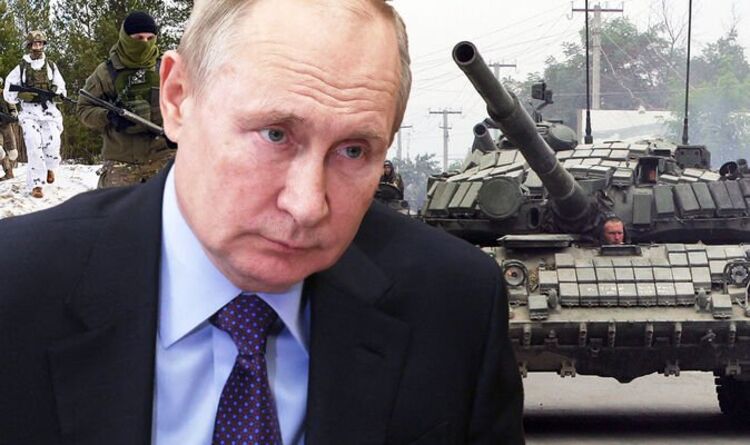 The Kremlin is believed to be preparing to “create the circumstances” under which it could justify an invasion, a Whitehall source said. Mr Putin is reportedly planning to invade on the grounds that the troops were “responding to Ukrainian or Western aggression”. According to the source, the CIA has warned NATO that the invasion could happen on Wednesday, following intelligence reportedly intercepted from Russian central command to troops on the ground.

They said that it is reasonable to “take it in good faith when Russia says it has not got any plans to invade”, but added: “You have also got to understand that they are hoping to create the circumstances where they say they are responding to Ukrainian or Western aggression.”

The concept of a “false flag” operation to stage a fake attack on its forces was also discussed in the White House on Thursday, according to the Telegraph.

Defense Secretary Ben Wallace warned it is “highly likely” that Vladimir Putin will order an attack on Ukraine, despite ongoing talks to calm the tensions.

He told the Sunday Times that there is a “whiff of Munich in the air”, in reference to the agreement that allowed the German annexation of the Sudetenland in 1938, but failed to prevent World War 2.

Mr Wallace said that Moscow is prepped to “launch an offensive at any time”, adding: “It may be that [Putin] just switches off his tanks and we all go home but there is a whiff of Munich in the air from some in the West.”

The Defense Secretary also previously indicated that diplomatic efforts could be no more than a “straw man”, suggesting that Russia may be planning to invade Ukraine regardless.

Moscow has built up 130,000 troops and firepower on the Ukrainian border.

But a Defense source told the Telegraph: “It is encouragement to maintain our resolve, remember the historical parallels and not repeat the error.”

Mr Biden warned the Russian president that Moscow would face “swift and severe” punishment from the US and its allies if that attack went ahead.

But Mr Putin described the allegations of an invasion plan as a “provocation”, instead implying that Ukraine was planning its own attack on pro-Russian separatists.

Mr Putin blamed the United States for providing Ukraine with arms on a series of calls with US President Joe Biden and French President Emmanuel Macron.

Speaking after the call, he said: “Provocative speculations about an alleged imminent Russian ‘invasion’ of Ukraine … come hand in hand with large-scale supplies of hi-tech weaponry” to Ukraine, creating “conditions for the Ukrainian army’s aggression in the Donbas.”

The Kremlin’s top foreign policy adviser confirmed that “the presidents have agreed to continue contacts at all levels”, but said that “hysteria has reached its peak.”

Several other countries including Israel, Japan, Bulgaria and Germany issued similar warnings over the weekend.

The British embassy is also pulling out non-essential staff, but local staff and a small team will remain in the country.

The US State Department ordered all but a “core team” of its diplomats and employees to leave their embassy in Kiev.

But Ukraine’s president Volodymyr Zelensky played down the threat, claiming he had not seen any evidence suggesting an attack was imminent.