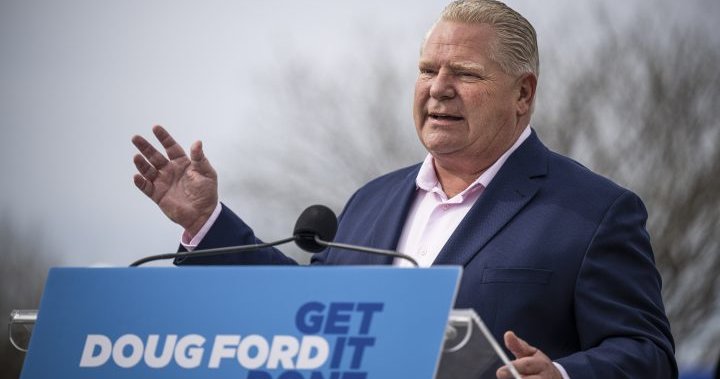 He says his party would continue to work with Indigenous communities and invest $1 billion to build an all-weather road to potential mine sites in the Ring of Fire if re-elected in June.

The Ring of Fire is an area about 500 kilometers northeast of Thunder Bay that is believed to be rich in vital minerals and the province has made long-standing promises to develop and exploit the area.

PCs have ‘stepped away’ from the pack as Ontario election begins: Ipsos poll

Last month, Marten Falls and Webequie First Nations announced they would submit terms of reference for an environmental assessment of the Northern Road Link project, which the province says is the latest piece of critical road infrastructure in the development of the Ring of fire.

Ford says he’s “proud” to have met with chiefs from Marten Falls and Webequie First Nations last month and that collaboration with community partners is what was missing from this “ambitious” project.

He says the development of the Ring of Fire will create thousands of new jobs in the mining industry and bring “countless” benefits and opportunities to Indigenous communities, including easier access to everyday consumer goods like groceries, fuel and water.

Ford adds that the minerals mined from the site will make Ontario a “resource powerhouse,” enabling the province to become a leader in the production of electric vehicles in North America.