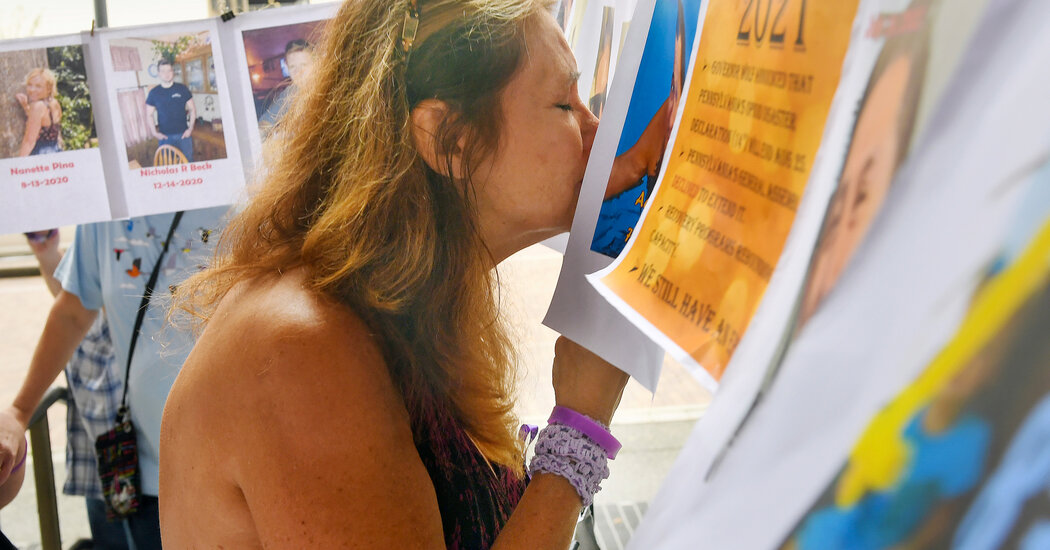 Sean Blake was among those who died. He overdosed at age 27 in Vermont, from a mix of alcohol and fentanyl, a synthetic opioid. He had struggled to find effective treatment for his addiction and other potential mental health problems, repeatedly relapsing.

Blake’s struggles reflect the combination of problems that have allowed the overdose crisis to fester. First, the supply of opioids surged. Second, Americans have insufficient access to treatment and other programs that can ease the worst damage of drugs.

Experts have a concise, if crude, way to summarize this: If it’s easier to get high than to get treatment, people who are addicted will get high. The US has effectively made it easy to get high and hard to get help.

No other advanced nation is dealing with a comparable drug crisis. And over the past two years, it has worsened: Annual overdose deaths spiked 50 percent as fentanyl spread in illegal markets, more people turned to drugs during the pandemic, and treatment facilities and other services shut down.

The path to crisis

In the 1990s, drug companies promoted opioid painkillers as a solution to a problem that remains today: a need for better pain treatment. Purdue Pharma led the charge with OxyContin, claiming it was more effective and less addictive than it was.

Doctors bought into the hype, and they started to more loosely prescribe opioids. Some even operated “pill mills,” trading prescriptions for cash.

A growing number of people started to misuse the drugs, crushing or dissolving the pills to inhale or inject them. Many shared, stole and sold opioids more widely.

Policymakers and drug companies were slow to react. It wasn’t until 2010 that Purdue introduced a new formulation that made its pills harder to misuse. The CDC didn’t publish guidelines calling for tighter prescribing practices until two decades after OxyContin hit the market.

In the meantime, the crisis deepened: Opioid users moved on to more potent drugs, namely heroin. Some were seeking a stronger high, while others were cut off from painkillers and looking for a replacement.

Traffickers met that demand by flooding the US with heroin. Then, in the 2010s, they started to transition to fentanyl, mixing it into heroin and other drugs or selling it on its own.

Drug cartels can more discreetly produce fentanyl in a lab than heroin derived from large, open poppy fields. Fentanyl is also more potent than heroin, so traffickers can smuggle less to sell the same high.

Because of its potency, fentanyl is also more likely to cause an overdose. Since it began to proliferate in the US, yearly overdose deaths have more than doubled.

No one has a good answer for how to halt the spread of fentanyl. Synthetic drugs in general remain a major, unsolved question not just in the current opioid epidemic but in dealing with future drug crises as well, Keith Humphreys, a Stanford University drug policy expert, told me.

A robust treatment system could have mitigated the damage from increasing supplies of painkillers, heroin and fentanyl. But the US has never had such a system.

Treatment remains inaccessible for many. Sean Blake’s parents, Kim and Tim, drained savings and retirement accounts and college funds to pay for treatment. Like the Blakes, many families spend thousands of dollars to try to get loved ones into care. Health insurers often refuse to pay for treatment; legal requirements for insurance coverage are poorly enforced.

When treatment is available, it’s often of low quality. The Blakes frequently found that providers were ill-equipped and overwhelmed. Some seemed to offer no evidence-based care at all.

Across the country, most facilities don’t offer effective medications; instead, they often focus on unproven approaches, like wilderness or equine therapy.

Some are just scams. One, called the “Florida shuffle,” has in recent years sent patients from facility to facility without offering real treatment — taking advantage of people desperate for help.

Beyond treatment, the US lags behind other countries in approaches like needle exchanges that focus on keeping people alive, ideally until they’re ready to stop using drugs. The country also could do more to prevent drug use and address root causes of addiction, a recent report from Stanford University and The Lancet found.

The solutions are costly. A plan that President Biden released on the campaign trail, which experts praised, would total $125 billion over 10 years. That’s far more than Congress has committed to the crisis. Lawmakers haven’t taken up Biden’s plan, and the White House hasn’t pushed for it, so far embracing smaller steps.

But inaction carries a price, too. Overdose deaths cost the economy $1 trillion a year in health expenses, reduced productivity and other losses, a new government report concluded — equivalent to nearly half of America’s economic growth last year.

The Sunday question: How well has Biden stood up to Putin?