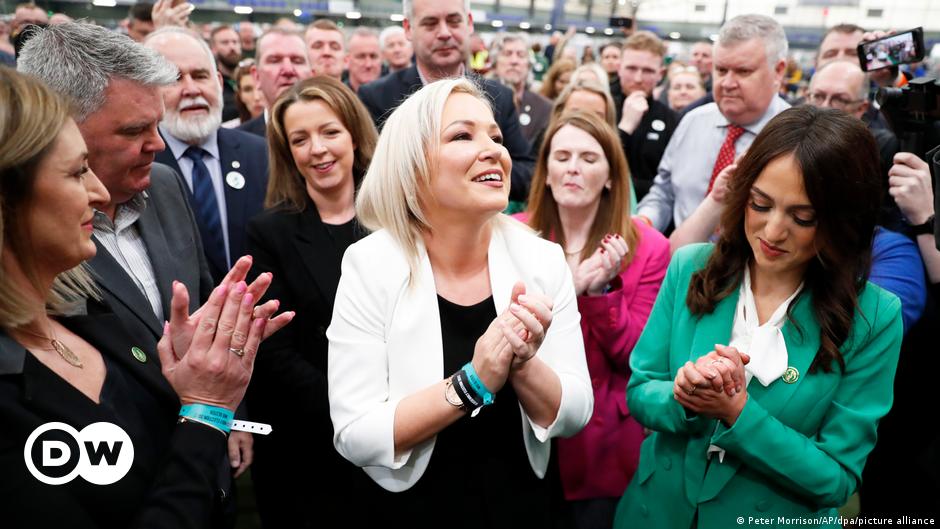 Sinn Fein, the Irish nationalist party that aspires to lift Northern Ireland from British rule to create a united Ireland, won the most seats in the Belfast legislature, official results showed on Saturday.

With almost all the votes counted, Sinn Fein secured 27 seats, while the Democratic Unionist Party (DUP), the largest in the Northern Ireland Assembly for two decades, took 24. Only two remained seats to declare.

Pro-British Unionist parties, mainly supported by the region’s Protestant population, have been prominent in Northern Ireland for a century.

Sinn Fein vice-president Michelle O’Neill said earlier on Saturday that Northern Ireland was entering a “new era” as her party was poised to win.

“This is a watershed moment for our politics and our people,” she said. “I will provide leadership that is inclusive, that celebrates diversity, that guarantees rights and equality for those who have been excluded, discriminated against or ignored in the past,” she added.

The largest group in the legislature has the right to provide the prime minister in Belfast. O’Neill is likely to take the job.

A prime minister advocating a united Ireland would represent a sea change in provincial policy.

As the former political wing of the paramilitary Irish Republican Army (IRA), Sinn Fein has pledged to hold a referendum on reunification with the Republic of Ireland to the south.

A referendum that could see Northern Ireland become part of the neighboring Republic of Ireland and leave the UK is ultimately at the discretion of the British government and is likely to be years away. The Good Friday peace agreement, however, stipulates that if it ever appears “likely” that a “majority of voters” will support reunification, the UK should allow such a vote.

O’Neill had played down the party’s calls for Irish unity during the election campaign. She said the economically left-leaning party was “not set” on a date for a sovereignty ballot, but was instead focused on helping people deal with a cost of living crisis.

But on Saturday O’Neil said a “healthy conversation is already underway” about Irish reunification. “Let’s have a healthy debate about what our future looks like,” she added.

Before the end of the vote count, DUP leader Jeffrey Donaldson acknowledged on Saturday that his Sinn Fein rivals were poised for election victory.

“Certainly it looks at the moment Sinn Fein will become the biggest party,” he told Sky News, while reiterating that the DUP would refuse to join a new government without a change to a trade deal. post-Brexit between the UK and EU.

This arrangement – effectively creating a barrier within the UK – makes many trade unionists uneasy.

The party in second place could choose the deputy first minister – a position that holds the same effective governmental power in Northern Ireland’s unique power-sharing arrangement.

Northern Ireland’s new lawmakers will meet next week to try to form an executive. If they fail to do so within six months, the administration will collapse.

It would mean a new election and continued uncertainty.

Voting in Northern Ireland came at the same time as regional elections in other parts of the UK, with Prime Minister Boris Johnson’s Conservative party losing control of key councils in London.