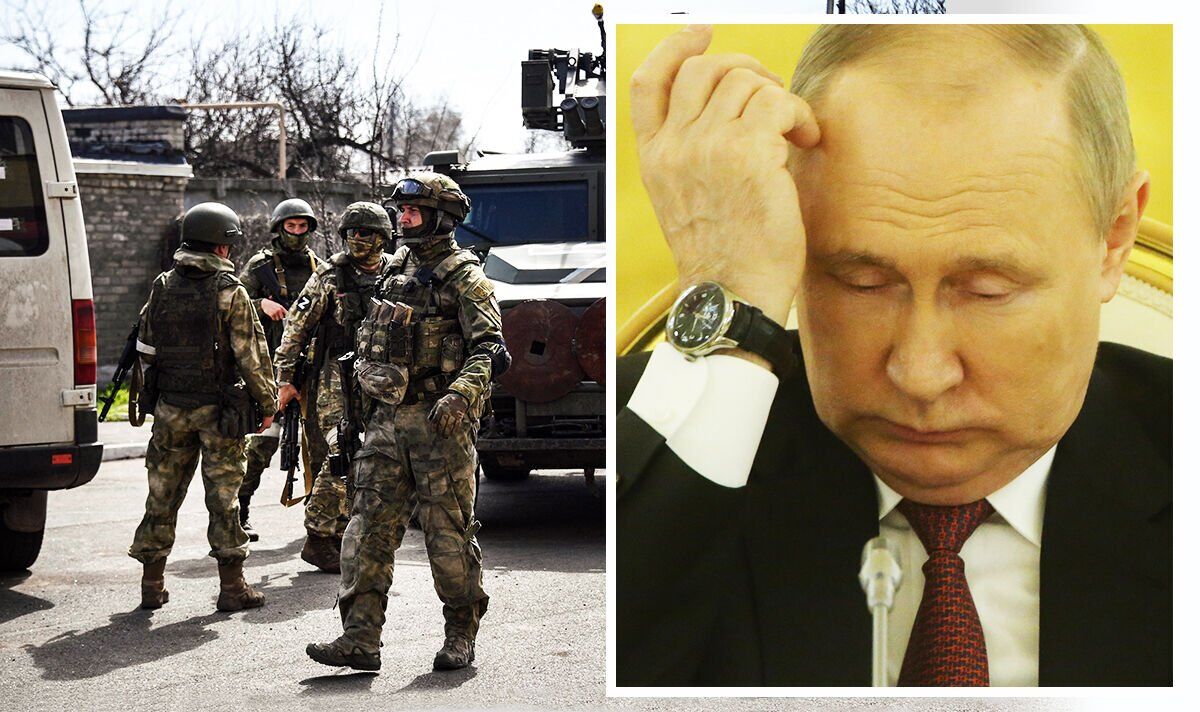 Russian soldiers are engaged in fierce battles in eastern Ukraine as they seek to conquer Donbass – with fighting intensifying around Severodonetsk. Determined Ukrainian resistance succeeded in slowing the Russian advance to a snail’s pace in many places along the eastern front. The Ukrainian army inflicted heavy casualties on the Russian invaders, leading to a mini-revolt among some of Putin’s most professional and well-trained troops.

A Russian army expert claimed that the special forces refused to carry out reconnaissance missions until they obtained better air cover to protect them from Ukrainian attacks.

He wrote on Twitter: “Trusted Russian Spetznaz (special forces) sources claim that the main reason for the slow movement of many Russian battalion tactical groups is that designated Setznaz units refuse to carry out reconnaissance tasks in because of the heavy losses suffered by the solid Ukrainian defence.

“To resolve the situation, commanders request UAV assistance, but due to equipment losses, it is difficult to obtain.”

Ukraine’s military said it had shot down more than 300 unmanned aerial vehicles (UAVs) since hostilities began on February 24.

Spetnaz is the Russian equivalent of the British Army’s SAS and was founded in the 1950s to carry out strategic missions.

In general, Spetsnaz military units are an airborne light infantry force that can act as shock troops.

During the Cold War, they were counted on to maintain the status quo in the Soviet sphere of influence.

Spetnaz units spearheaded the invasion of Czechoslovakia in 1968 and helped crush the Hungarian uprising of 1956.

They were also widely used in operations in Afghanistan during the country’s occupation by the Soviet Union.

After the collapse of the Soviet Union, Spetznaz forces fought in Chechnya, as well as in Crimea and Syria.

Today, a few elite Spetsnaz units, such as Alpha and Vympel Groups, have purely strategic missions – such as counterterrorism, counterproliferation, and nuclear facility security.

Mark Galeotti, a Russian security expert, said the myths were fueled by “tales of secret assassinations and macho heroism, fueling the belief that they are soldiers, spies and saboteurs all in one.

“Increasingly, the Spetsnaz are at the heart of a new Russian mode of warfare that emphasizes speed, surprise and deception rather than massive conventional force, and their skills ensure that they will retain their special status in the future.”

However, it would appear that the Spetnaz forces suffered heavy casualties in Ukraine and repeated damage.

In March, as many as 11 members of a GRU Spetnaz brigade were reportedly killed in fighting in Mariupol.

It comes as kyiv insisted on Sunday that there could be no ceasefire deal with Moscow involving ceding territory to Russia.

Presidential adviser Mykhailo Podolyak said territorial concessions to Russia would only sow the seeds for another bloody war in the future.

He said: “Today, any concession to Russia is not a path to peace, but a war postponed for several years.

“Ukraine does not exchange its sovereignty, nor its territories and the Ukrainians who live there.

“It’s a shame we have to explain such simple things to such reputable outlets as @nytimes.”