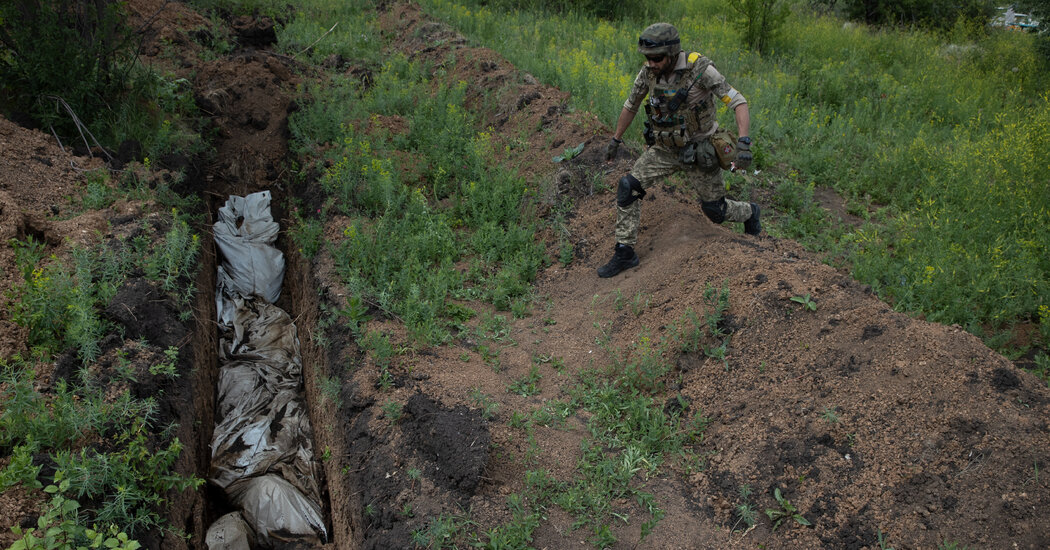 LYSYCHANSK, Ukraine – A mass grave on the outskirts of this eastern Ukrainian city remains uncovered. Mounds of dirt and yellow-petalled grass surround a pit filled with a dozen body bags. They stink of death in the hot summer wind.

The dead are civilians who have been killed by shelling in recent months in the towns of Lysychansk and Sievierodonetsk and the nearby town of Rubizhne. They are huddled together because there are no relatives to claim and bury their bodies.

Standing above the grave, Pvt. Sergiy Veklenko, 41, explained why the bodies were still on display: “All our machinery that we had in the city’s inventory – excavators and everything – was given to the army to dig trenches.”

As the war enters its fourth month and Ukrainian and Russian casualties run into the thousands, it is clear that the trenches have also become graves for many soldiers.

Private Veklenko, a former policeman who joined the Ukrainian army at the start of the war, estimates that 300 people are buried in the mass grave. “We are burying people here who have died since April,” he said.

The tomb is near a range of hills which now houses Ukrainian artillery positions defending the city. Howitzers fired intermittently for much of Thursday morning.

The number of civilians killed in Lysychansk and Sievierodonetsk, two towns separated by the Siversky Donets River, is unknown. As Russia consolidates its control in Sievierodonetsk and focuses on neighboring Lysychansk, civilian casualties are certain to increase unless Ukrainian forces withdraw.

On Thursday, local officials said at least four people were killed in a Russian airstrike in Lysychansk. The attack happened in the morning, but it took several hours for the news to be published on official Telegram channels, highlighting the difficulty of communicating what is happening in the city.

Lysychansk, an industrial city with a prewar population of 100,000, is largely cut off from the outside world, with no cellphone service or electricity. Local officials estimate that there are 40,000 people left in the city, although there is no way of knowing the exact number.

Their reasons for staying include the need to care for older relatives and, in some cases, even a reluctance to part with their pets.

“Everyone doesn’t want to leave their homes,” said a woman who came out of her house to get supplies from a group of police and military on Thursday. “And what about cats and dogs?” What about seniors? So we sit here.

“You have to have a lot of money to evacuate, to pay the rent,” she continued, giving only her first name, Luda. “And they don’t allow pets in the rented apartments. I have two dogs and two cats, how can I abandon them? It’s not an option, crying over them later.

Two people in her neighborhood were killed by shelling about a week ago, she said. They were buried in a nearby patch of woods, their graves marked with a cluster of wilted flowers.

In Sievierodonetsk, around 500 civilians have taken refuge in a large chemical plant, as fighting rages in parts of the city where Ukrainian forces still have control. Authorities estimate that 10,000 civilians remain.

Since the destruction of three bridges connecting the two cities, Ukrainian forces in Sievierodonetsk have had no easy escape route. On Thursday, it was reported that Ukrainian troops who could cross the river were beginning to withdraw to defend Lysychansk, which is on higher ground.

For soldiers and civilians in Lysychansk, one question lingers: what comes next?

A group of Ukrainian soldiers sheltering in the basement of an apartment complex expressed hope that advanced rocket systems promised by the United States would arrive soon. The longer range of the rockets would allow them to hit Russian artillery positions. But until the weapons arrive, the soldiers said, the Russian artillery will be relentless.

“An hour feels like a whole day,” said one soldier.