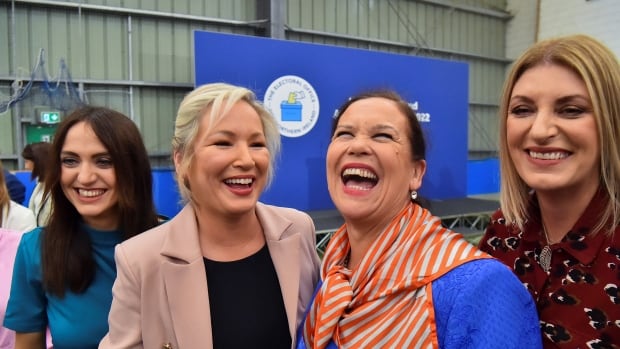 Irish nationalist party Sinn Fein, which seeks unification with Ireland, hailed a “new era” for Northern Ireland on Saturday by winning the most seats in the Northern Ireland Assembly for the first time in a historic victory.

With nearly all the votes counted from Thursday’s UK local elections, Sinn Fein secured 27 of the assembly’s 90 seats.

The Democratic Unionist Party, which dominated the Northern Ireland legislature for two decades, has 24.

The victory means Sinn Fein is entitled to the premiership in Belfast for the first time since the founding of Northern Ireland as a Protestant-majority state in 1921.

The centrist Alliance party, which does not identify as either nationalist or unionist, saw a huge wave of support and was poised to become the other big winner in the vote, claiming 17 seats.

“Today ushers in a new era”

The victory is a milestone for Sinn Fein, which has long been linked to the Irish Republican Army, a paramilitary group that used bombs and bullets to try to wrest Northern Ireland from British rule for decades of violence involving Irish Republican activists and Protestant loyalist paramilitaries. and the British army and police.

“Today ushers in a new era,” Sinn Fein Vice President Michelle O’Neill said shortly before the final results were announced. “Regardless of religious, political or social background, my commitment is to make politics work.”

O’Neill stressed that it was imperative that politicians in Northern Ireland meet next week to form an executive – the devolved government of Northern Ireland. If none can be formed within six months, the administration will collapse, triggering a new election and more uncertainty.

There’s “room in this state for everyone, all of us together,” O’Neill said. “There is an urgency to restore an executive and to put money back in people’s pockets, to start fixing the health service. People cannot wait.”

The fallout from Brexit

But it has angered many trade unionists, who argue the new controls have created a barrier between Northern Ireland and the rest of the UK that undermines their British identity. In February, the DUP’s Paul Givan resigned as Prime Minister as post-Brexit tensions sparked a new political crisis in Northern Ireland.

Saturday’s results bring Sinn Fein’s ultimate goal of a united Ireland closer, although the party has kept unification on the sidelines this year in a campaign dominated by soaring living costs.

Regarding Irish unification, O’Neill said there would be no constitutional change until the voters decided. Sinn Fein leader Mary Lou McDonald indicated on Friday that planning for any unity referendum could come within the next five years.

Polling expert John Curtice, professor of political science at the University of Strathclyde in Glasgow, said Northern Ireland’s latest election results are a legacy of Brexit.

Sectarian violence escalates in Northern Ireland after years of dormancy

After years of slumber, Northern Ireland has seen a week of escalating sectarian violence that many fear is getting worse. 1:56

“The Unionist vote has fragmented due to divisions within the community over whether the Northern Ireland protocol is something that can be satisfactorily changed or should be scrapped,” he said. he writes on the BBC website.