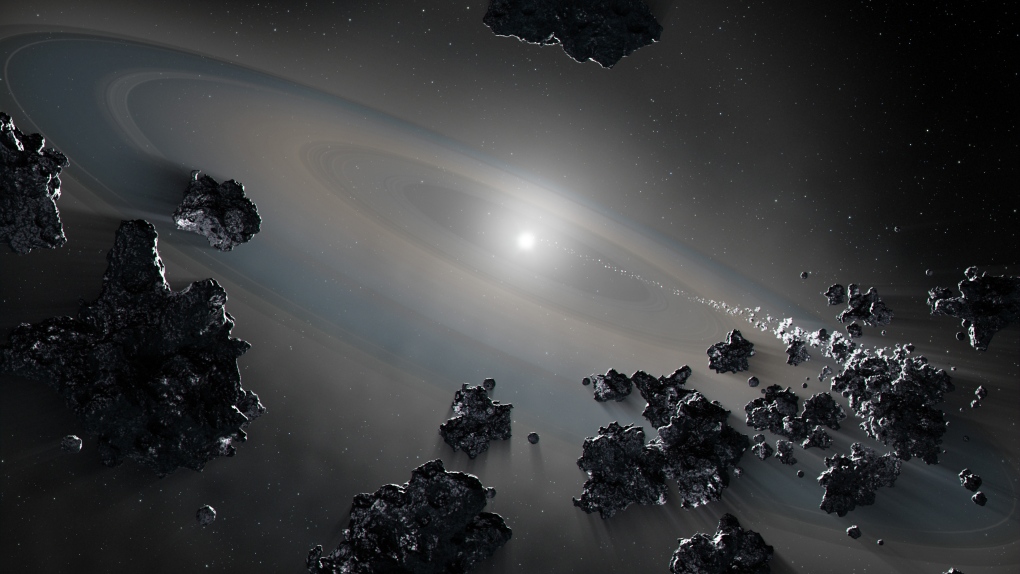 For the first time, NASA astronomers say they’ve observed a dead star tearing apart a planetary system and consuming material from other planets, which they say offers insight into the beginning and end of life here on Earth. .

Data collected by NASA’s Hubble Space Telescope and other observational projects has been used to analyze a white dwarf star – which is the dying, dense remnant of a star like Earth’s sun – called G238- 44.

When stars collapse, the density of remnants often pulls other objects in space towards them. In the case of G238-44, the white star was observed to violently disrupt the interior and exterior of a nearby planetary system. The bursting of the planetary system around G238-44 also offers researchers the opportunity to see a planet’s ingredients – what materials they are made of and in what quantities, in order to better understand what elements, metals and other materials make up a planet. planet.

This “cosmic cannibalism” case study, released Wednesday by NASA, is crucial to understanding our universe and its systems-in-formation, scientists say.

NASA scientists also noted that the white star appeared to be siphoning rocky and icy debris from nearby bodies. The researchers say the siphoning of icy debris is particularly interesting because of what it suggests about how water is found on various moons or planets in the universe. Scientists suggest that icy debris crashing into dry, rocky planets “irrigates” them, which could be how water was delivered to Earth billions of years ago.

“We’ve never seen these two types of objects pile up on a white dwarf at the same time,” lead researcher Ted Johnson said in a press release. “By studying these white dwarfs, we hope to better understand the planetary systems that are still intact.”

Observations of this white dwarf also gave researchers the opportunity to study how our own planetary system may collapse at the end of our sun’s life.

When a star begins to die, it expands, altering the orbits of all nearby planets and violently throwing smaller objects such as asteroids or moons into spectacular, eccentric orbits. But as the star collapses, it becomes denser, which could lead some of the objects into an irregular orbit too close to the white dwarf. The force of the white dwarf tears these objects apart and turns them into gas or dust that forms a ring around the dying star before falling to its surface.

By observing how this process happened with G238-44, scientists can begin to understand how the process can happen again when Earth’s sun begins to die.

Research suggests that when our sun begins to expand at the end of its life, it will likely engulf and vaporize the first three planets in our solar system, including Earth, before its violent throes begin to disrupt planetary orbits. remaining, similar to the planetary system surrounding G238-44.

But fear not – scientists say the end of the sun’s life probably won’t happen for another 5 billion years, so there’s plenty of time to find out.