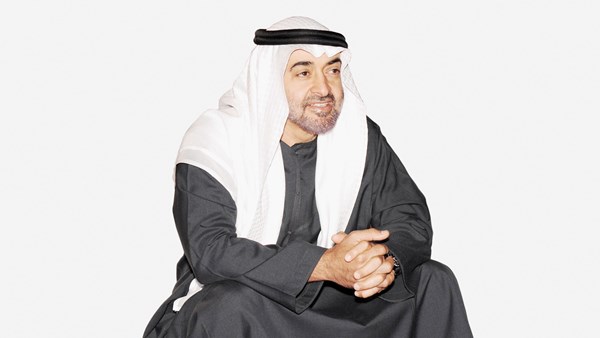 
His Highness Sheikh Mohamed bin Zayed Al Nahyan, President of the State, may God protect him, embodied the values ​​of peace and tolerance in words and deeds, until the United Arab Emirates became a shining beacon of peace and a destination for those seeking peace and security. His Holiness Pope Francis, Pope of the Catholic Church, embraced by Abu Dhabi, and one of the results of which was the publication of the Document on Human Fraternity, which was adopted by the United Nations as the International Day of humanity.
His Highness is considered to establish the mediocrity of Islam without exaggeration or negligence, as the masses of scholars from all over the land of the owners of monotheistic religions gathered in the Emirates to refute the allegations of extremist thought and confronting it with thought and criticism and a statement of true Shariah in all fields, which includes the Council of Muslim Elders and the Abu Dhabi Peace Forum The best scholars of the Islamic nation who have played their part in explaining the validity of the belief.
His Highness also sponsored and received the participants in the events among the nation’s scholars and owners of monotheistic religions, and those who belong to spiritual philosophies and to create the atmosphere of brotherly human dialogue. He wanted to meet scholars and thinkers of all religions with an open heart and a permanent smile, a sign that his heart is open to everyone.
Abu Dhabi has also become a headquarters for Muslim communities that come together in the UAE to address issues faced by Muslim minorities and to limit attempts to lure deviant organizations to young people from these communities with false information. through the World Council of Muslim Communities. .

Spread peace in the world
The history of mankind has recorded prominent roles for His Highness, represented in a number of historic initiatives and humanitarian attitudes, which have contributed to spreading a culture of tolerance and peace in the world, and among the most important of these initiatives is his sponsorship of the Humanity Fellowship Document signed in the United Arab Emirates on February 4, 2019.
And the creation of the Mohammed bin Zayed University for the Humanities. The university aims to support the process of development, development and scientific research by offering academic programs in studies, social sciences, humanities and philosophies to obtain bachelor’s, master’s and doctoral degrees.
His Highness stressed the importance of the role of academics, clergy and relevant religious institutions in promoting the values ​​of citizenship in societies and consolidating a culture of tolerance, coexistence, dialogue and peace. world, in addition to moderation and moderation, rejection and confrontation. intolerance and extremist thinking.
Abu Dhabi peace convoys have spread to the continents of the world, calling and spreading peace and peace, relying on the support and support of His Highness… which was a major reason for overcoming and regress extremist ideology and spread moderation and moderation. .. around the world, especially in Muslim societies.

Muslim Council of Elders
The Muslim Council of the Elders was established on July 19, 2014 as an independent international body, aimed at promoting peace in Muslim societies and bringing together a group of scholars, experts and notables of the Islamic nation who distinguished by wisdom, justice, independence and moderation. , with the aim of contributing to strengthening peace in Muslim societies and breaking the intensity of the troubles and wars that have plagued the Islamic nation in recent times, and the factors of conflict, division and fragmentation have been spared .
The Council is headquartered in Abu Dhabi and is the first institutional entity that aims to unify efforts to unite the Islamic nation, put out the fires that are ravaging its body, threaten the human values ​​and tolerant principles of Islam and spread evil of the sectarianism and violence that has plagued the Islamic world for decades.
Abu Dhabi Peace Forum
The Abu Dhabi Peace Forum has had the responsibility of spreading the culture of tolerance and coexistence, since its inception, the responsibility of spreading the culture of peace and spreading the spirit of tolerance, inspired by the spirit of the founding leader, the late Sheikh Zayed bin Sultan Al Nahyan, may God rest his soul in peace. The forum aimed to root the concept of peace in Islam. And to explain the historical contribution of our true religion to it, thus opening great doors for scholars and scholars to complete research and enlighten the public. and private opinion, all according to sound scientific methodology, which is rooted in the principles of Sharia, takes into account the requirements of time and place, evaluates considerations for consequences and consequences, and aims to achieve the interests and to avoid spoilers.
He also published the Encyclopedia of Peace in Islam, which was jointly prepared by an intellectual elite composed of 100 male and female scholars from different religions, and deals with issues of peace and tolerance, which is one of the greatest intellectual and academic projects sponsored by the UAE within the framework of the various initiatives and programs carried out by the Forum for the Promotion of Peace, headed by His Excellency Sheikh Abdullah bin Bayh.
World Council of Muslim Communities
The Council was established in 2018, as an international institution aimed at coordinating the efforts of institutions of Muslim societies in non-Muslim countries, enabling Muslim societies to positively integrate into their countries; Achieving harmony between commitment to religion, belonging to the homeland and advancing one’s functional role; To achieve civilized witnesses, and to encourage its members to contribute to the revival of their civil states, and to correct the stereotypical image of Islam and Muslim societies, it is a house of expertise to rationalize organizations and associations operating in Muslim societies, to renew their thinking and improve their performance in order to achieve one goal, which is the integration of Muslim societies into their states in a way that achieves perfection for its members. Citizenship and full affiliation with the Islamic religion, and the first prerequisites for achieving this goal are to liberate Muslims in Muslim societies from subordination to currents, intellectual and jurisprudential movements and political parties that cross the borders of the national state , which prevents their integration into their new societies and the countries of which they hold citizenship.
Document of Human Fraternity
His Highness dedicates a World Day for Humanity, where countries around the world celebrate the International Day of Human Fraternity, which falls on February 4 each year, in commemoration of the day that saw the signing of the “Document on Human Fraternity ” for the world. peace and coexistence, which was signed in Abu Dhabi, the Sheikh of Al-Azhar Al-Sharif, the Imam the Elder, Dr. Ahmed Al-Tayeb, and the Pope of the Catholic Church, Pope Francis, in the presence and under the patronage of His Highness, the event and the signature, as well as the elements contained in the document which the world desperately needs after the hatred and the rhetoric of extremism and hate have been crushed in the body of humanity.
The document on human brotherhood states that the correct teachings of religions call for adhering to the values ​​of peace and upholding the values ​​of mutual knowledge, human brotherhood and coexistence; And that freedom is the right of every human being: in belief, thought, expression and practice, and that pluralism and differences of religion, color, sex, race and language are the wisdom by divine will, God created human beings there, and made it a permanent basis from which the rights to freedom of belief, freedom to be different, and the criminalization of coercion of persons to a religion or to a particular culture branch out.. Specific, or impose a civilized style is not accepted by the other.
The document emphasizes that heinous terrorism that threatens the safety of people, whether east or west, north and south, and haunts them with fear, terror and anticipation of the worst, does not is not a product of religion – even if the terrorist raises its banners and wears its insignia – but is rather the result of the accumulation of misinterpretations of the texts of religions and the policies of hunger, poverty and poverty. injustice, oppression and condescension; She indicated that the concept of citizenship is based on equal duties and rights under which everyone enjoys justice, therefore work must be done to consolidate the concept of full citizenship in our societies.
She stressed that the relationship between East and West is an absolute necessity for both, and cannot be replaced or ignored, so that both can enrich each other’s civilization through the exchange. and the dialogue of cultures. The United Nations noted that the “Document on Human Brotherhood” established a framework for a new world constitution that sets a roadmap for humanity towards a tolerant world.

Zayed Award for Human Fraternity
The award is sponsored by His Highness and is the first of its kind for human brotherhood, and the award is the result of the human brotherhood document, which was signed on February 4, 2019 and signed in Abu Dhabi by the Grand Imam, Professor Dr. Ahmed Al-Tayeb, Sheikh of Al-Azhar, and his brother, His Holiness Pope Francis, Pope of the Catholic Church, in the presence of representatives of all religions, who received worldwide attention, and resulted in a number of initiatives, including the establishment of the Abrahamic Family House and the award, which culminated in the adoption by the United Nations of February 4 as the International Day of Human Fraternity.