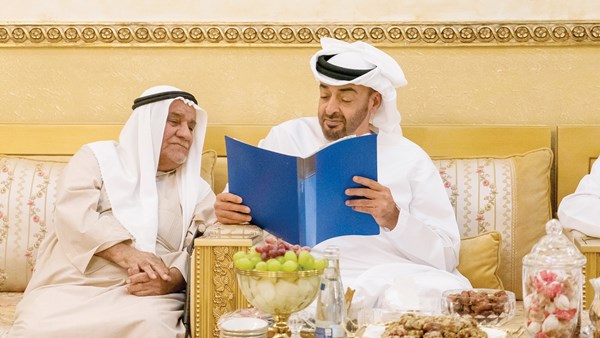 
Since the outbreak of the Corona Pandemic in early 2020, His Highness Sheikh Mohamed bin Zayed Al Nahyan, State President, has provided a unique model to the world in supporting humanitarian issues and reaching out to all without discrimination on the basis of race, color, religion or political position. .
His Highness led world leaders who interacted internationally through the preparations of the Emirates in solidarity with the world, to face the repercussions of the “Corona” pandemic, to launch from the land of the Emirates the idea of ​​​​helping and to support the countries of the world to overcome this global crisis.
His Highness cares about people everywhere and everywhere, whether in the United Arab Emirates or in any part of the world. His Highness seeks to help everyone.

The numbers speak
On March 16, 2020, His Highness Sheikh Mohamed bin Zayed Al Nahyan, President of the State, may God protect him, launched his immortal saying: “Medicines and food are a red line, and they will never be paralyzed” , during the weekly “Al Barza” to His Highness, to lead His Highness at the time Working in two parallel lines: providing all the needs necessary for the well-being of citizens and residents of the UAE, and the second, reaching out and assistance to friendly and brotherly countries that need support to deal with the repercussions of “Covid 19”.
For the United Arab Emirates to double its aid to all countries and increase its external efforts, to become one of the first countries to support humanitarian initiatives during the “Covid 19” pandemic, as the aid provided by the State constituted 80 % volume of international response to affected countries during the “pandemic”.
The United Arab Emirates, in doubling its aid to all countries, started from the humanitarian approach established by the late Sheikh Zayed bin Sultan Al Nahyan, may his soul rest in peace, and from a conviction in the importance of strengthening the global humanitarian efforts to stop the spread of the virus since the outbreak of “Covid-19” began.
From the start of the “pandemic” in early 2020 until July 2021, the total number of medical aids, breathing apparatus, examination machines and personal protective equipment, and supplies reached 2,154 tons, which were sent to 135 countries around the world.
The total number of medical aid trips reached 196 and 6 field hospitals were established in Sudan, Guinea, Conakry, Mauritania, Sierra Leone, Lebanon and Jordan, and a mobile clinic was equipped in Turkmenistan. Aid was sent to 117 countries from the warehouses of international organizations located in the International Humanitarian Services City in Dubai.
Additionally, $10 million in in-kind assistance has been donated by the UAE to the World Health Organization.
During the “pandemic”, the United Arab Emirates presented a global model of professional crisis management and distinguished management of the spread of epidemics, which was concretized in reality and proved by the testimonies of international organizations, including the ‘World Health Organization. .
Official figures and statistics indicate that the UAE is at the forefront of the world in carrying out the number of examinations, which has reached nearly 159 million examinations, and has provided more than 24,795 million doses. of anti-Covid 19, until yesterday Saturday, to reach the proportion of recipients of the dose The first dose of the vaccine compared to the total population: 10%, and the proportion of recipients of two doses of the vaccine compared to the total population: 97.85% of the citizens and residents of its territory at a time when the main countries could not reach this percentage, which made the United Arab Emirates among the first countries in the world to vaccinate its population.
The Ministry of Health and Community Protection has registered and approved 5 types of Coronavirus vaccines, to make the UAE one of the most diverse countries in the world and to provide different types of vaccinations against the disease, which makes it gave an added advantage.
All of these and other data have led to a significant decrease in death rates compared to global rates, and the UAE has now become one of the safest and most stable countries thanks to the taking of strong measures. and measures that have led to the decline of this disease. .

international donations
During the “Corona” crisis, the United Arab Emirates has transformed into a global supply center for medicines, medical devices, training and logistics programs related to the pharmaceutical industry and medical supplies.
The United Arab Emirates is the largest provider of aid in the fight against the virus in the region and has worked to ensure that its aid reaches countries in need regardless of any consideration, so medical products, especially preventives, such as “medical beds, protective clothing, medical masks and enveloping medical suits” were launched. protective glasses, medical masks, respirators and sterilizers”.
And the United Arab Emirates has taken the initiative to cooperate with international organizations to enhance efficiency and ensure that their aid reaches countries trying to cope with the “Covid-19” pandemic, and the International City of Services facilities in Dubai, which includes the largest warehouses for humanitarian aid. aid, helped facilitate the transfer of more than 80% of World Health Organization aid to a number of countries.

logistics center
While international pharmaceutical companies, through their regional offices in the United Arab Emirates, provided logistics services to support 41 countries in the field of medicines, medical supplies, training and logistics programs, in addition to medicines, medical equipment and supplies, which are managed by authorities or come from the International Humanitarian Services City in Dubai.
The United Arab Emirates has 83 regional offices for international pharmaceutical companies, including 52 companies with logistics services that support 41 countries and supply them from their offices in Dubai with medicines and medical supplies related to the “Corona” crisis, such as personal care supplies and sterilizers.

International recognition
His Highness Sheikh Mohamed bin Zayed Al Nahyan, President of the State, may God protect him, has been an inspiring role model in supporting global health, and among his most significant efforts have been childcare and empowerment of women.
His Highness’s efforts have had a great positive impact on human health, whether at home or abroad, which has caused international institutions to follow with interest and appreciation what His Highness is doing, especially since the world is going through exceptional circumstances due to the “Covid-19 Pandemic”.
Earlier, the World Health Organization Regional Office for the Eastern Mediterranean described the efforts made by His Highness Sheikh Mohamed bin Zayed Al Nahyan, President of the State, may God protect him, as an impressive and outstanding contribution. promoting global health issues.
These contributions are made not only by providing various types of generous financial support, but also by launching global initiatives aimed at eliminating serious diseases, such as poliomyelitis, neglected tropical diseases and other important health problems.
His Highness the President of the State has efforts to support health systems and provide health care services in communities that lack good health services, as well as his instrumental role in building international partnerships, launching of projects and the creation of financing funds to achieve these objectives, and the promotion of collaboration in the field of health.
In addition to His Highness’ leading role in supporting “Covid-19” pandemic response efforts inside and outside the Eastern Mediterranean region.
In addition to the “Reaching the Last Mile” initiative, a 10-year initiative worth $100 million launched in 2017, by His Highness Sheikh Mohammed bin Zayed, with support from the Bill and Melinda Gates Foundation and the Department international development, work is underway to eradicate communicable diseases and pave the way for the eradication of blindness Fluvial and lymphatic filariasis as a public health problem in countries where these diseases are endemic.
At the time, His Highness Sheikh Mohamed bin Zayed Al Nahyan pledged $20 million to support activities in this area, and these partnerships resulted in the establishment of the Global Institute for Disease Elimination (GLIDE) 2019 .
This new institute, based in Abu Dhabi, is the only one of its kind in the region and was created through a partnership between His Highness and the Bill & Melinda Gates Foundation.