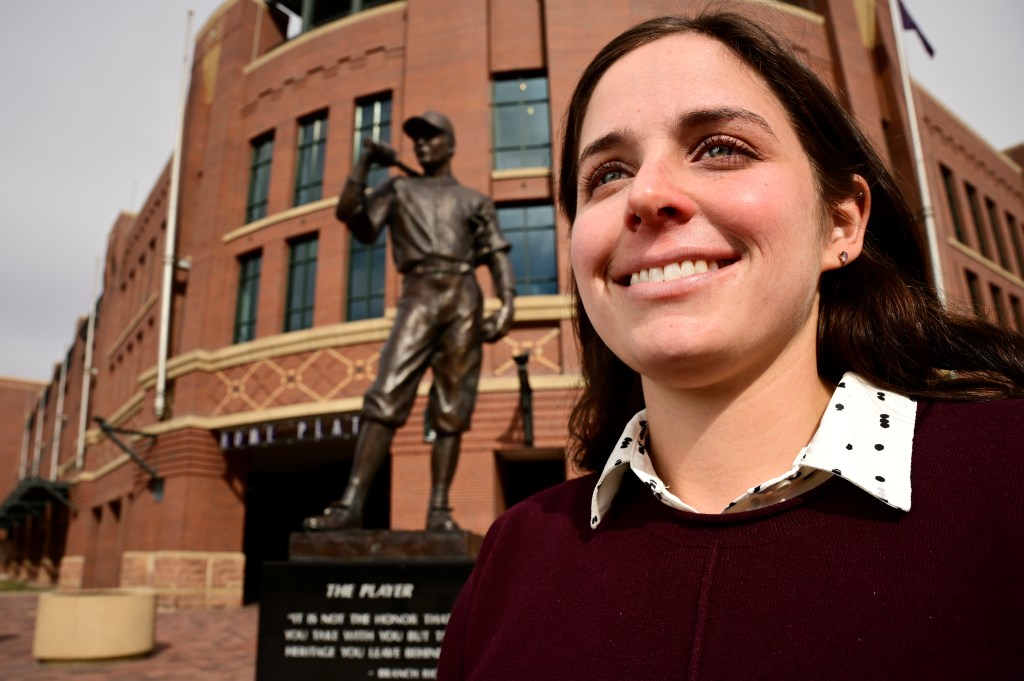 The scouting report on Emily Glass, the first female scout in Rockies history, reads like this: smart, articulate, analytical yet intuitive, good people skills, possesses an excellent baseball background but also has much to learn.

“She’s got a very bright future,” said Marc Gustafson, the Rockies’ senior director of amateur scouting operations. “More than anything else, the thing that has impressed me is Emily’s ability to interact with our other scouts and others in the front office, and to speak her mind and be confident. When you look at her resume and consider her other qualities, it was a slam dunk to hire her.”

Glass, whose baseball background includes an internship with Major League Baseball International in the Dominican Republic, and a 2 1/2-year stint as the Miami Marlins’ education coordinator, where she worked extensively with Latin American players, is proud to be the Rockies ‘first female scout. But she doesn’t dwell on that milestone.

“I don’t really think of myself as a trailblazer,” she said during an interview from a suite at Coors Field. “There have been other women who have scouted for other organizations, but I can say that I’m really proud that I’m the first one to do it here. Hopefully, within 10 years, in every organization, the most qualified person will get the job, whether it’s a woman or whoever they are.”

When the Marlins eliminated their education coordinator program after the 2021 season, Glass was caught off guard and had to search for a career lifeline. She found it in the MLB Diversity Pipeline Scout Development Program held during October in Arizona.

She made a big impression and was one of 13 people hired from the program. Fred Wright, a retired scout who once worked for the Rockies, was an instructor at the scouting school. He gave Glass a glowing recommendation.

Glass, who’s long been interested in scouting, joined the Rockies in early November with the official title of scouting operations administrator. She assists Gustafson, as well as other members of the scouting department, by tabulating information, collecting data, organizing draft reports, viewing videos and organizing information on amateur players. She’ll have a hand in creating the team’s “big board” for the 2022 draft this summer.

But she won’t be chained to her desk at 20th and Blake. She also will be out in the field scouting baseball talent in Colorado and Wyoming.

“She nailed the organizational and administrative stuff and she hit the ground running back in November,” Gustafson said. “Now, when I look at the scouting component, from what I’ve seen, she has a good eye as to what she’s looking at. She’s got a keen eye for talent and she can talk the game. But, and this is important, she’s humble and she knows that there is a lot to learn.”

To that end, Glass is undergoing a rigorous education.

In January, she and Gustafson traveled to Southern California where they met with area scouts Tim McDonnell and Matt Hattabaugh to watch games. Glass also traveled to Puerto Rico for a few days last month, working with Julio Campos and Rafael Reyes, and national crosschecker Jay Matthews. In three weeks, she will join Damon Iannelli, Colorado’s assistant director of scouting, in Houston for a college tournament at Minute Maid Park.

“The sky is unlimited for Emily,” said Montgomery, who was instrumental in her being hired. “Her high energy and infectious personality mean that she never meets a stranger. I classify Emily as a future rockstar in Major League Baseball.”

Glass has been passionate about the game ever since she was a kid growing up in Davis, Calif. as a huge Oakland Athletics fan. Like her older brother, Joe, she was a catcher, a position that gave her a deeper understanding of the game playing out in front of her.

“I grew up playing games with my family and I’ve always been a strategic person, and that’s one of the reasons I was a catcher,” she said. “I love game theory and strategy and scenarios around baseball. One of the reasons I love baseball is how complex it is. There is so much to it.”

Although Glass is well-schooled in analytics, she knows it’s not the main component of amateur scouting.

“My personal belief is that the best answers and the best decisions come from diverse facts and sets of opinions,” she said. “I think analytics are very important to be used as an anchor to start conversations about a player.

“But I’m not ‘sabermetricist’ when I wake up in the morning. I think the best answers come from combining that with traditional scouting. What stands out for me as super-important is a player’s passion and love for the game, especially when you are looking at young people, age 16-22.”

Growing up, Glass played baseball, with the boys, until switching to softball during high school. She also played softball for two years at Pomona College, where she graduated in 2015 with a degree in policy and politics and a minor in Spanish. Her senior thesis explored the changing demographics of Major League Baseball; looking at the decreasing participation by African-Americans and the increase of Latin Americans in the majors.

Through the years, she continued to play baseball with men’s teams whenever she could, including a stint with a team in Australia.

“I played second base down there because my arm was shot,” she recalled.

After college, she was awarded a prestigious Thomas J. Watson Fellowship, which is described as “a one-year grant for purposeful, independent exploration outside the United States.” She designed her own project, one that examined baseball’s international player development systems. Her journey took her to seven countries: Aruba, Curacao, the Dominican Republic, Puerto Rico, Chile, Australia and Japan.

While in Japan, she helped coach in the Musashi Fuchu Little League program in Western Tokyo, one of the premier youth baseball programs in Asia.

“I was just the second woman to set foot on the baseball field where I worked,” she said. “Coaching Little League in Japan was the toughest thing I’ve ever done, mostly because it was tough to communicate — culturally.”

In the United States, the culture of professional baseball is slowly changing. In January, Rachel Balkovec was named the first female manager in affiliated minor league baseball when she was named by the Yankees to manage the Low-A Tampa Tarpons. Also in January, Houston hired Sara Goodrum as its director of player development, making her one of the highest-ranking female executives in the major leagues.

In November 2020, Kim Ng, at age 52, was hired as general manager of the Miami Marlins, becoming the first woman to become a GM of a major men’s professional sports team in North America.

Glass, who worked for the Marlins at the time, watched Ng’s hire with a sense of pride and admiration, and with a peek toward his own career path.

“Kim is always the hardest-working person in the room and she is probably the brightest person in every room, but she doesn’t have to make you know that,” said Glass, who first got to know Ng when she was doing her internship with Major League Baseball International. At that time, Ng was an MLB senior vice president, specializing in international baseball operations.

“That job seems really difficult, so I even told Bill I didn’t want his job,” she said with a laugh. “I mean, I’m just beginning my career in baseball. This will be my fifth season, so I’m just trying to learn and get better.”