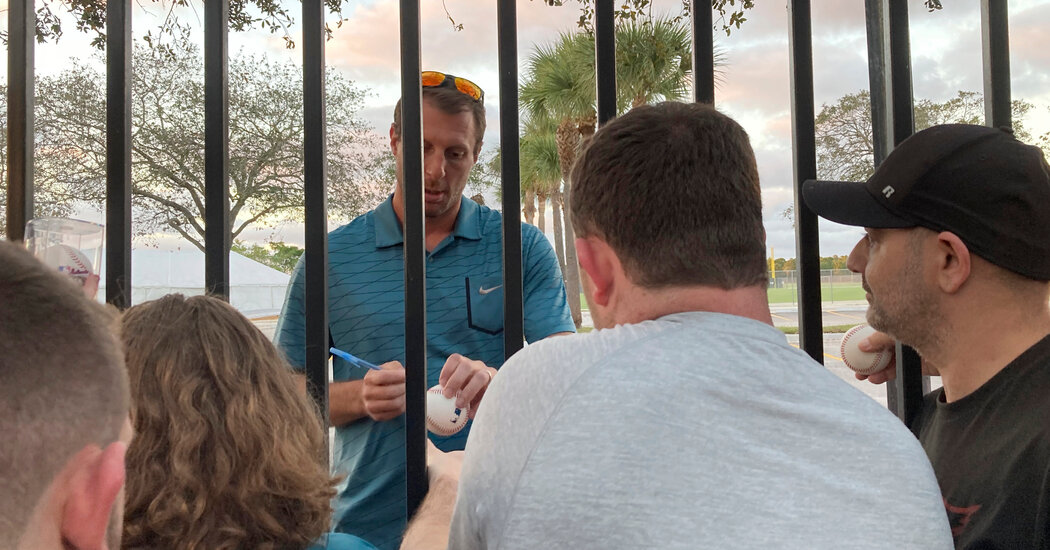 He sits on a top union subcommittee. He was at the nine straight days of face-to-face negotiations last month in Jupiter, Fla., which included a marathon 16 ½-hour session. And he spent countless hours on the phone with his counterparts across the league — all while trying to juggle fatherhood and getting ready for the season.

“The X’s and O’s of the proposals and everything, I enjoyed being on the front lines for that,” said Scherzer, 37, on Saturday afternoon, the day before players were required to report for the rushed, abbreviated spring training. “The hardest part was the amount of phone calls that I had to make and be in connection with everybody across the game to try to get that information out.”

So how did Scherzer celebrate after the deal was approved on Thursday, ending the MLB-imposed lockout?

“I drank a lot,” he said after pausing and smiling.

Scherzer was happy to get on the field with his new team. Since he lives in nearby Jupiter, Friday was the first day Scherzer — or any player — was allowed to enter their team’s facility since the lockout began on Dec. 2.

He had been to the Mets’ spring training facility many times before — he played for the division rival Washington Nationals for seven years — but now he was entering the home clubhouse. On Saturday, he threw a bullpen session with Mets pitching coach Jeremy Hefner watching. The other day at a private facility, Scherzer said he threw a three-inning, 50-pitch simulated game against hitters.

The MLB Lockout Comes to an End

So even though spring training will be three and a half weeks, rather than the usual six, Scherzer said he felt roughly where he would be on March 12 of a normal camp.

“I feel like I’ve got a pretty good shot to make it to 100 pitches by opening day,” said Scherzer, referring to the Mets’ new first game of the season, on April 7, against the Nationals in Washington.

Scherzer, a three-time winner of the Cy Young Award, said he didn’t care if he started the game or if it was Jacob deGrom, the Mets’ ace who has won the award twice and was likely headed toward a third if not for an arm injury last summer.

“He’s the reason I’m here,” said Scherzer, who signed a three-year, $130 million contract with the Mets this off-season, setting a MLB record for the highest average annual salary ($43.3 million per year). “I want to be here and pitch with great pitchers.”

Although they have never played together before, Scherzer said he talked to deGrom, 33, a few times over the past few weeks as the negotiations picked up steam. Scherzer said one of the side benefits of working on a labor deal was getting to know some of his new teammates — like shortstop Francisco Lindor and outfielder Brandon Nimmo — before they shared a clubhouse. Like Scherzer, Lindor is a member of the union’s executive subcommittee. Nimmo is the Mets’ union representative.

In terms of the new collective bargaining agreement, Scherzer declined to talk about it in much detail. Asked if the union achieved enough of its original goals — from improving competition among teams to better compensating young players to increasing players’ lagging share of the game’s revenue — Scherzer said he could debate the pros and the cons of the deal but preferred to move on .

“I want the fans to be focusing on the games and the players,” he said. “I don’t want the fans hanging onto things we’re talking about in the deal. C’est fini. Let’s just play baseball.”

Scherzer declined to explain why he — and the seven other elected members of the union’s executive subcommittee, all veteran players with many millions in career earnings — voted no on the deal on Thursday. The labor pact was still approved because the subcommittee is part of a larger executive committee, which also consists of the 30 team representatives. The overall group, the majority of whom are rank-and-file players, voted 26-12 in favor.

Nimmo, 28, declined to explain why the Mets were one of the four teams to vote against the deal. He did single out one concession the players made in order to get the luxury tax thresholds higher in the new agreement: the installation of a new, fourth threshold at $60 million over the base ($230 million in 2022) that could limit the highest-spending teams, such as the Los Angeles Dodgers and the Mets, who are currently projected to spend a team-record and MLB-leading $270 million under billionaire owner Steven A. Cohen.

“I’m not a huge fan because that’s Steve’s tax, basically,” Nimmo said, then referring to MLB “But it’s something that they’re passionate about and they wanted. That was one thing that we weren’t totally for.”

He added later, “Definitely didn’t want to limit him from spending the money that he has to spend the way he wants. But in the deal making process, you’ve got to concede some things.”

Overall, though, Nimmo said he felt players made progress in addressing tanking and helping young players, who had been relied upon more but paid relatively little. But time will tell, he said, if the measures will improve competition among teams.

Although the relationship between MLB and the union has frayed, and the dispute frustrated fans and compromised spring training, a full 162-game season will be played.

“These are nasty fights and this is the business of baseball,” Scherzer said, adding later about the collective bargaining process, “It’s ugly. There’s no other way to say it. And so you have to say things and do things that represent all players and to fight for the most you can. That’s just a matter of fact. And so you have got to move on and get ready to play ball.”

With the deal behind him, Scherzer said he was happy to get his life back and to spend more time focusing on his new team, his three children and his wife, Erica — and less time making calls.

“The fact that I don’t have to be on the phone anymore and I get more dad time is a good thing,” he said.