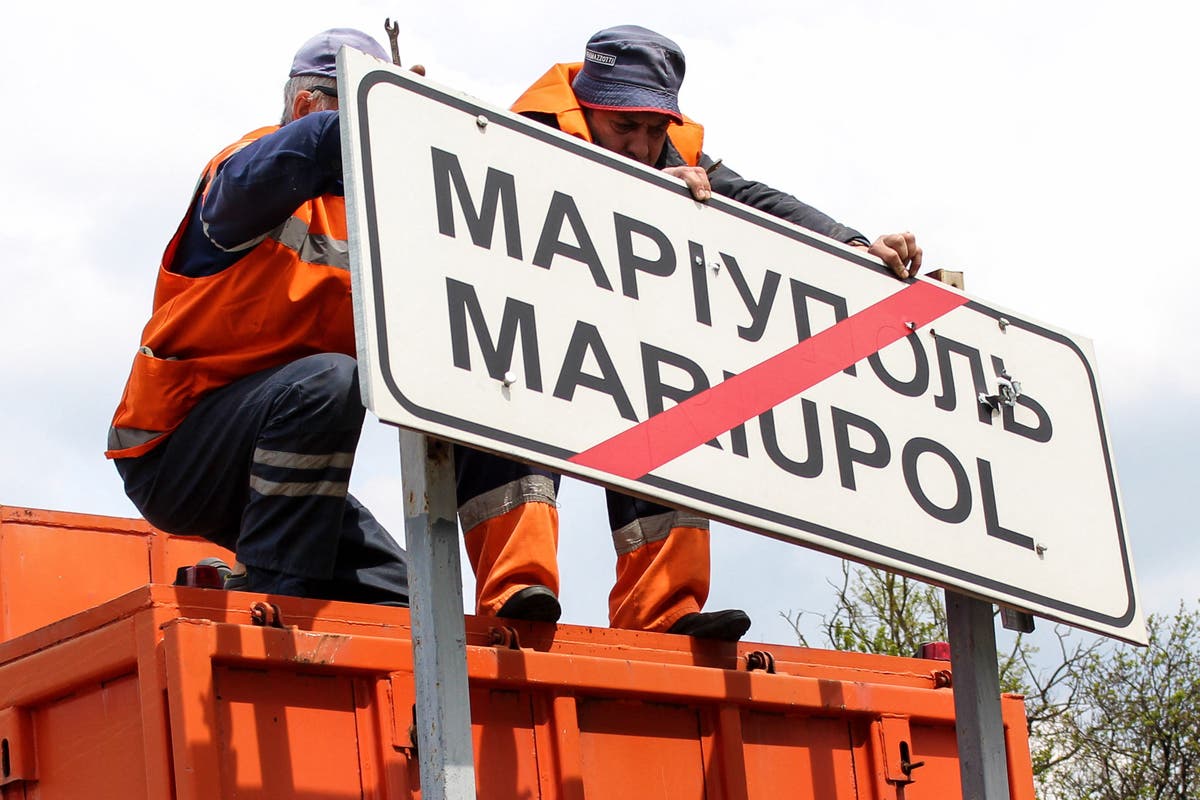 Pro-Moscow separatists were pictured removing Ukrainian and English language signs and replacing them with Russian ones outside the besieged city of Mariupol.

A statement from the Donetsk People’s Republic said on Thursday that ‘updated road signs’ had been erected outside the southeastern port city, which has been the focal point of some of the Russian bombings. the most formidable.

“Work to change road signs in the liberated territory will continue,” the statement added.

The separatist group released a number of images of city workers wearing orange vests swapping signs that were previously in Ukrainian and English and installing new ones in Russian.

It comes as Ukrainian troops in Mariupol prepare for further attacks by Russian forces on steel mills in Azovstal on Saturday in a bid to capture the city in time for Victory Day celebrations.

The Russian Monday holiday commemorates the surrender of Nazi Germany in 1945 and the end of World War II. The day is usually marked by displays of military might, fireworks and marching troops.

The steel plant is the last part of the city still in the hands of Ukrainian fighters. Dozens of civilians were trapped alongside them in the factory for weeks with little food, water or medicine.

President Volodymyr Zelensky said in a late-night video address Friday that Ukraine was working on a diplomatic effort to rescue defenders barricaded inside the steel mill. It is not known how many Ukrainian fighters remained there.

United Nations-sponsored evacuations began last weekend for some of the hundreds of civilians who had taken refuge in a network of tunnels and bunkers under the plant. But they were stopped during the week by new fighting.

The Russian side constantly violated a ceasefire, she said, making the evacuation very slow.

Russia confirmed the number of evacuees and said: “The humanitarian operation in Azovstal will continue on May 7.”

The Independent has a proud history of campaigning for the rights of the most vulnerable, and we launched our first campaign to welcome refugees during the war in Syria in 2015. Today, as we renew our campaign and launch this petition to Following the unfolding crisis in Ukraine, we are asking the government to go further and faster to ensure the delivery of aid. To learn more about our Welcome to Refugees campaign, Click here. To sign the petition Click here. If you would like to donate, please Click here for our GoFundMe page.