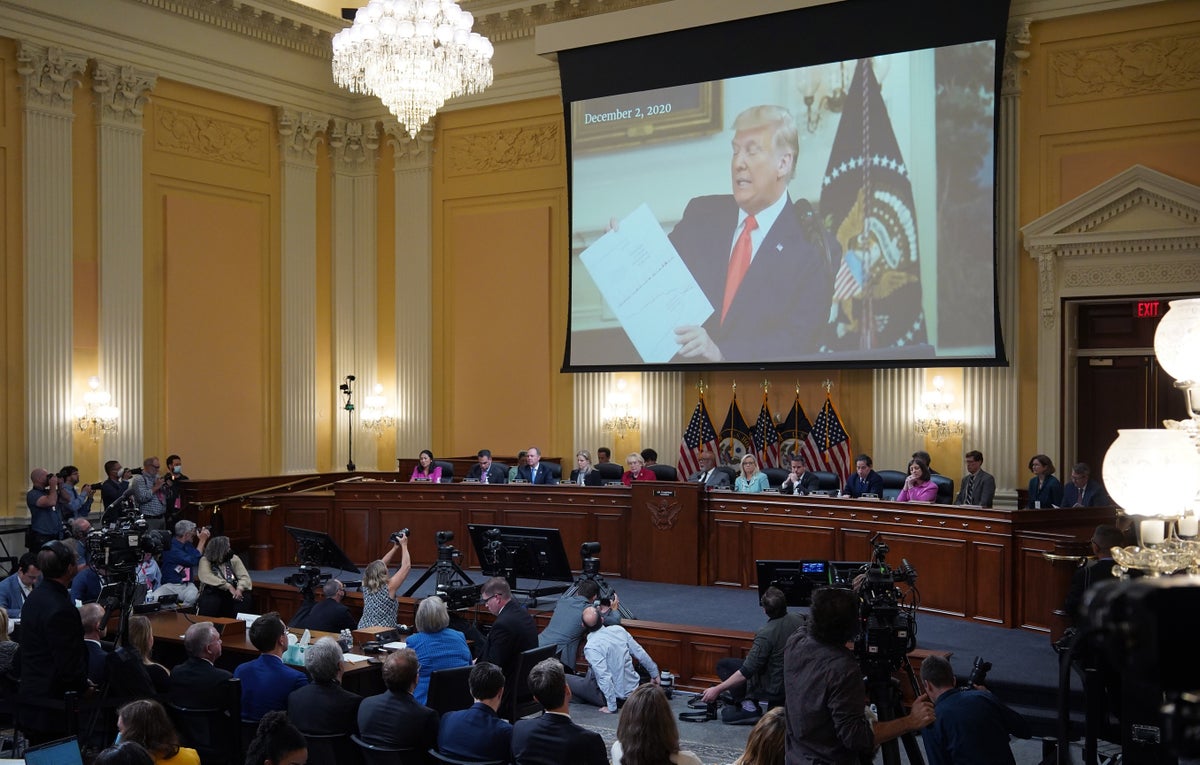 The committee sought to demonstrate that Trump knew he had lost the election but “oversaw a scheme” to overturn the result, “when the vice president refused to accept it, he unleashed a violent mob against Pence at the Capitol”.

Evidence was presented that Pence told Trump “repeatedly” that the Eastman plan was illegal and unconstitutional. Retired judge Michael Luttig testified that he would have “lay my body across the road” to prevent the cancellation of the election.

Members of Trump’s family and staff witnessed a “heated” call with Pence that morning, after which the president rewrote his rally speech with sharp lines about his vice president. He later sent a tweet causing angry rioters to advance, with some coming within 40ft of Pence as he was being evacuated.

The day after the failed attempt to annul the election, Eastman sent an email asking for a pardon, which he did not receive. Mr Luttig warns of the threat to democracy from Trump and stays.

Biden says recession is ‘not inevitable’

Joe Biden told the Associated press that a recession is “not inevitable” at a time when the federal government is working to raise interest rates to curb inflation.

His comments come after a speech in Philadelphia in which he lambasted Republicans, billionaires and Wall Street while defending his economic plans.

The Justice Department accused the Jan. 6 committee of withholding witness transcripts that would help prosecute those who attacked the U.S. Capitol.

In a letter sent to the committee on Wednesday, the DOJ said the “failure” to grant it access to the transcripts “complicates the department’s ability to investigate and prosecute those who have engaged in criminal acts” in connection with the Attack on the Capitol.

“It is essential that the select committee provide us with copies of the transcripts of all of its witness interviews,” continues the letter, which was signed by Assistant Attorneys General Kenneth Polite, Jr. and Matthew Olsen, as well as the U.S. Attorney Matthew Graves.

Richard Hall reports on the latest developments in potential criminal charges against those involved in the January 6 attack on the Capitol.

One of the most stunning moments of Thursday’s Jan. 6 committee hearing came as members presented a 3D model of the areas of the Senate basement where Mike Pence was evacuated after leaving the Senate floor. with the Secret Service.

According to security footage from the day, rioters closed dangerously close to the vice president as crowd members inside and outside the Capitol chanted “hang Mike Pence.”

And according to committee member Pete Aguilar, a confidential witness told the FBI that members of the Proud Boys, who were present in the riot, “would have killed Mike Pence if they had had the chance.”

John Bowden has surprising details about the story.

Tory lawyer John Eastman has sought a pardon after pushing the plan to change the 2020 election result despite being aware the strategy was illegal.

Trump’s eldest daughter, Ivanka Trump, told the committee in pre-recorded testimony that “it wasn’t a specific, formal discussion, it was very loose and casual.”

“The conversation was quite heated,” added Mrs. Trump.

Gustaf Kilander has the story.

A lawyer who served as chief legal adviser to Mike Pence in the days leading up to Jan. 6 chastised Donald Trump on Thursday and said a statement by the president saying the vice president had agreed he had the power to annulling the election was “categorically false”. ”.

Greg Jacob made the statement Thursday just before the Jan. 6 committee took a break.

that would ensue if the former president tries to cancel the 2020 presidential election, the select committee investigating the Jan. 6 riot on Capitol Hill said Thursday.

The committee released video testimony from former Trump administration lawyer Eric Herschman describing his conversation with John C Eastman, who was trying to concoct a plan to get then-Vice President Mike Pence to rescind the results of the elections during the certification of the electoral college.

Eric Garcia, reporter for The Independent of Capitol Hill, has history.

The threats against Mr. Pence came after Mr. Trump falsely told them that Mr. Pence had the power to change the outcome of the election.

Introducing the video, Rep. Pete Aguilar said the attack on the Capitol was “the effect of Donald Trump’s words and actions.”

A retired federal judge who once counted a top lawyer for Donald Trump’s campaign among his legal aides, has flatly rejected the notion that Vice President Mike Pence had the power to interfere in the Electoral College count .

J Michael Luttig, former judge of the United States Court of Appeals for the Fourth Circuit, rejected the idea supported by his former clerk, John Eastman, that the vice president could reject the results of the states where the campaign Trump had claimed fraud (without proof).

“There was no basis in the Constitution or the laws of the United States for the theory adopted by Mr. Eastman. At all. None,” Mr. Luttig told the House Jan. 6 Committee on Thursday.

Assistant to the Vice President: Pence told Trump ‘multiple times’ the plan to cancel the election was illegal

Former Vice President Mike Pence warned Donald Trump that his plans to void the 2020 election were illegal by Jan. 6, the commission of inquiry into Mr. Trump’s role in the attack revealed on Thursday.

The latest revelation came in the form of testimony from Marc Short, the vice president’s former chief of staff who has remained one of his closest aides since Mr Pence left the White House in 2021.

According to Mr. Short, the vice president warned Mr. Trump “repeatedly” that the plan was unconstitutional, but Mr. Trump continued his efforts to pressure his vice president to interfere in anyway. the electoral count.