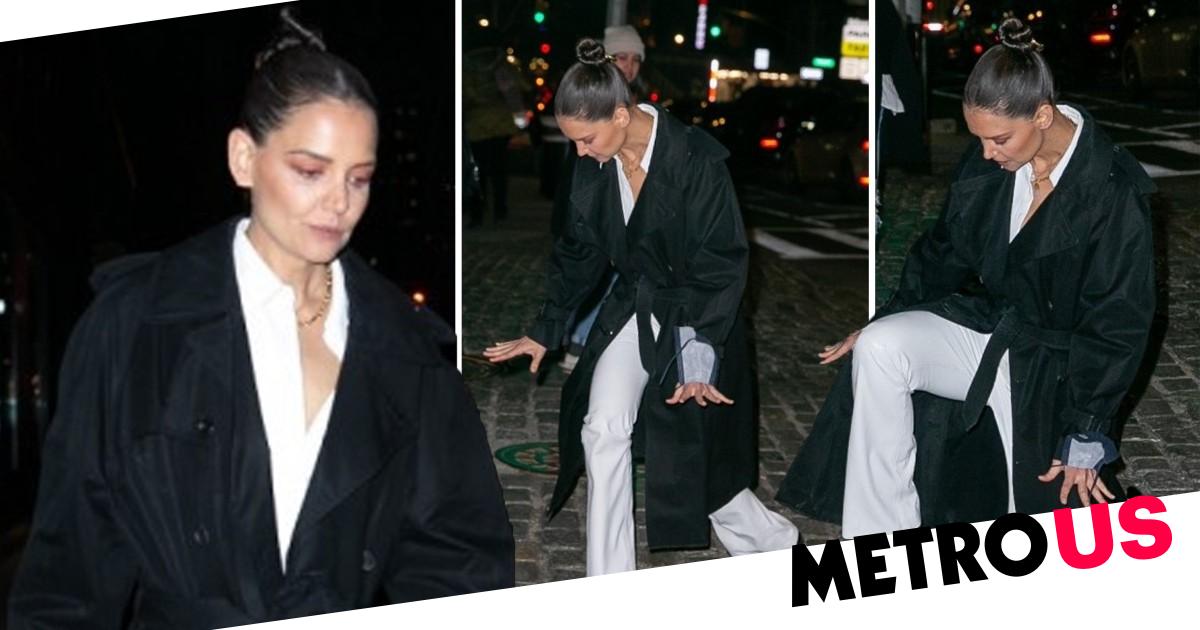 Katie Holmes had a close call on Saturday night when she tripped coming out of a fashion event in New York City.

The actress, 43, was spotted coming out of an Alice+ Olivia runway event during New York Fashion Week when she lost her balance.

Pictures show Katie throwing her arms out in front of her to break her fall, landing on her left knee following the stumble.

Wearing a pair of black heeled boots, Katie tripped over on an uneven cobblestoned road and was in danger of scuffing her smart, all-white outfit.

Thankfully the actress seemed unharmed by the fall, and, after regaining her balance, was able to walk off the stumble.

Wearing a black coat to combat the February chill, Katie expertly shook off the potentially embarrassing moment, looking classy in the high-waist ensemble.

The Batman Begins star had just minutes earlier exited the runway show of Alice + Olivia, where she had attended alongside fashion designer and friend Zac Posen.

Earlier in the night Katie had shared a photograph from the event to Instagram, looking stunning as she showed off her striking autumn-coloured eye makeup.

Earlier this week the icon was seen in New York with her lookalike daughter Suri, 15, with the mum and daughter wearing matching cream-coloured cardigans.

Katie, who adorned her neck with some chunky gold chain necklaces, pulled her hair back into a loose top knot, and covered her face with a bright pink face mask.

Suri, meanwhile, kept it casual as she paired the cream cardigan with some blue Converse trainers, and slouchy jogging bottoms.

Katie shares Suri with ex-husband Tom Cruise, who she was married to from 2006-2012.

The actress had been in a relationship with Emilio Vitolo Jr but sadly the pair announced their split last year.

Katie and Emilio were first linked in September 2020 before making things Instagram official in December.

The Dawson’s Creek star’s rep confirmed the break-up to Us Weekly, saying: ‘The pair have parted ways amicably but remain friends.’

MORE: Fringed fashion is back for 2022: Here are our favorite pieces