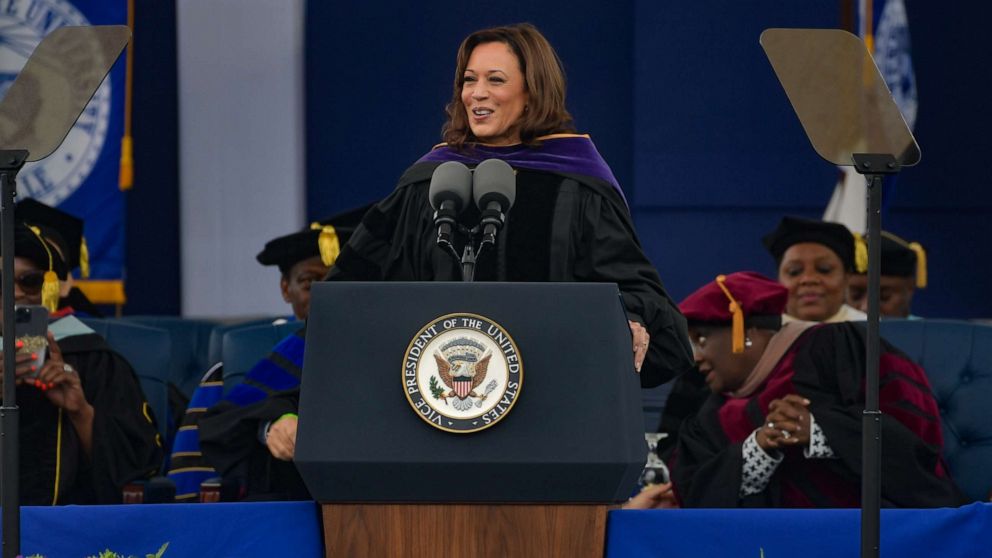 Vice President Kamala Harris was sobering about the “unstable” world students are heading into as she delivered the commencement address at Tennessee State University on Saturday.

The Vice President discussed the Russian invasion of Ukraine, as well as the impending possibility that Roe v. Wade be overturned by the Supreme Court after a draft opinion leaked earlier this week.

“The world you graduate in is unstable,” Harris said. “It’s a world where long-established principles now rest on shaky foundations. We see it in Ukraine, where Russia’s invasion threatens the international rules and norms that have ensured unprecedented peace and security in Europe since World War II.

The crowd erupted in cheers when Harris remarked that the students faced an unstable world where Roe v. Wade could be knocked down.

“In the United States, we are once again compelled to stand up for fundamental principles that we had hoped had been established for a long time – principles like the freedom to vote, the right of women to make decisions about their own bodies, even what constitutes the truth, especially in a time when anyone can post anything online and claim it’s fact,” Harris said.

Harris praised the students for succeeding despite the COVID-19 pandemic.

“Class of 2022, you’ve made it, and there’s also no denying that your class has come down a rocky road — a pandemic that has taken away much of the college experience you once imagined,” she said.

Switching to a more optimistic tone, the vice president said that each student is well equipped to meet “today’s greatest challenges” by drawing on their lived experiences and personal qualities.

“Most importantly, you get to see what can be unburdened of what has been,” she said, drawing on her stump speech on the campaign trail.

As a fellow graduate of a historically black college and university, she said “there is no limit to your capacity for greatness.”

“I want all of you – every single one of you – to always remember that you are not alone, you come from the people, you come with the people,” she said. “Because I promise you, there will be a time when you walk into a conference room or a courtroom or maybe even the situation room, and you walk into the room and find that you are the only person in this room who looks like you or has had your life experience.

“At this time, you must remember that you are not alone in this room. Always know that you carry the voice of everyone here and those on whose shoulders you stand.”

Harris is also scheduled to deliver the commencement address at the US Coast Guard Academy on May 18.